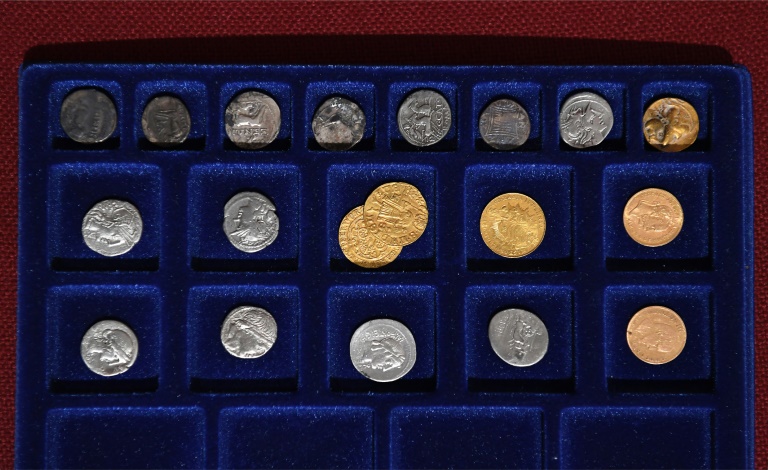 A trove of nearly 3,000 coins was discovered under a house in what was one of Hungary's wartime Jewish ghettos. (Photo: AFP)

A vast and "unique" trove of antique and Roman-era coins, unearthed in what was one of Hungary's wartime Jewish ghettos, is proving a conundrum for historians.

Thrilled with the chance discovery of the 2,800 gold and silver coins spanning decades and continents, researchers are in the dark however about who collected and then hid them.

That the coins were buried under a house whose one-time owner, the likely collector, is presumed to have been murdered in the Holocaust deepens the mystery.

According to a Hungarian Jewish organisation, the hoard also exposes how gaps remain in what is known about Hungary's Jews during World War II.

The current owners of the house in the town of Keszthely, 190 kilometres (120 miles) southwest of the capital Budapest, stumbled across the coins in February during work on the cellar.

They were likely hidden by a Jewish owner who was later deported to a Nazi German death camp in 1944, said Balint Havasi, director of Keszthely's Balatoni Museum where the items are currently exhibited.

"It's a priceless collection that can also help us learn about the Holocaust," Havasi told AFP.

In a letter to the museum, the building's current owners explained how they had been digging a hole in the cellar after pumping out groundwater when they came across the hoard.

"When we opened one of them, we were greeted by an amazing sight, just like in a fairy tale: hundreds of coins, real treasure," it continued.

"We hope that it can return to its legal owners one day."

The finders have requested anonymity, according to the museum, which also declined to reveal the exact location of the house.

Although the coins have not been valued, Havasi said that the collection was "unique... in terms of geographic spread, time period -- from antiquity to 20th century -- and the large volume".

Almost half of the coins are from Pannonia, which was a province of the Roman Empire that covers modern-day western Hungary, according to Ferenc Redo, an archaeologist and coin expert.

The others are mostly antique coins from around the world, including pre- and post-revolutionary France, 19th century German territories, and both Tsarist- and Soviet-era Russia.

Many are from even farther afield, including South America, Africa, Asia and British-ruled India.

"It's sad that someone put together such a worldwide collection but tragically could not continue," Redo told AFP.

As well as the owner's identity, how the collection was amassed is unknown.

Engravings on jewellery also found in the jars suggest that the items may have belonged to the Pollak family, who were well-known Jewish traders in Keszthely before World War II.

Almost all of the town's once flourishing Jewish population died in the Holocaust, and no descendants of the possible owners have yet been traced.

In May 1944, the town's Jews were forced into a ghetto, of which the house where the coins were found was a part, said Gabor Rejto, head of the EMIH Unified Hungarian Jewish Congregation in Keszthely.

Two months later, they were transported from Hungary to the Auschwitz death camp, he added.

A total of 829 Jews -- around 15 percent of the town's population at the time -- were deported from Keszthely.

Only 64 of them survived.

Today, the community has around a dozen members, Rejto said.

"The discovery shows how there are still many unanswered questions about the Holocaust in Hungary," he told AFP.

An estimated 600,000 Hungarian Jews were killed in the Holocaust, most in Auschwitz.

Many victims were never identified or remains found.

The museum plans to digitalise the collection and enlist archivists and historians to scour the Pollak family tree in search of descendants.

If no owner can be found, the collection will revert to ownership by the state.

"We also hope the exhibition will spread the word about the coins, and that a legal owner will turn up," Havasi said.