Can't get enough of stinky durian

China’s craving for durian is skyrocketing. The stinky and thorny fruit, known as the king of tropical fruits, has made its way into all kinds of sweet and savory delicacies. 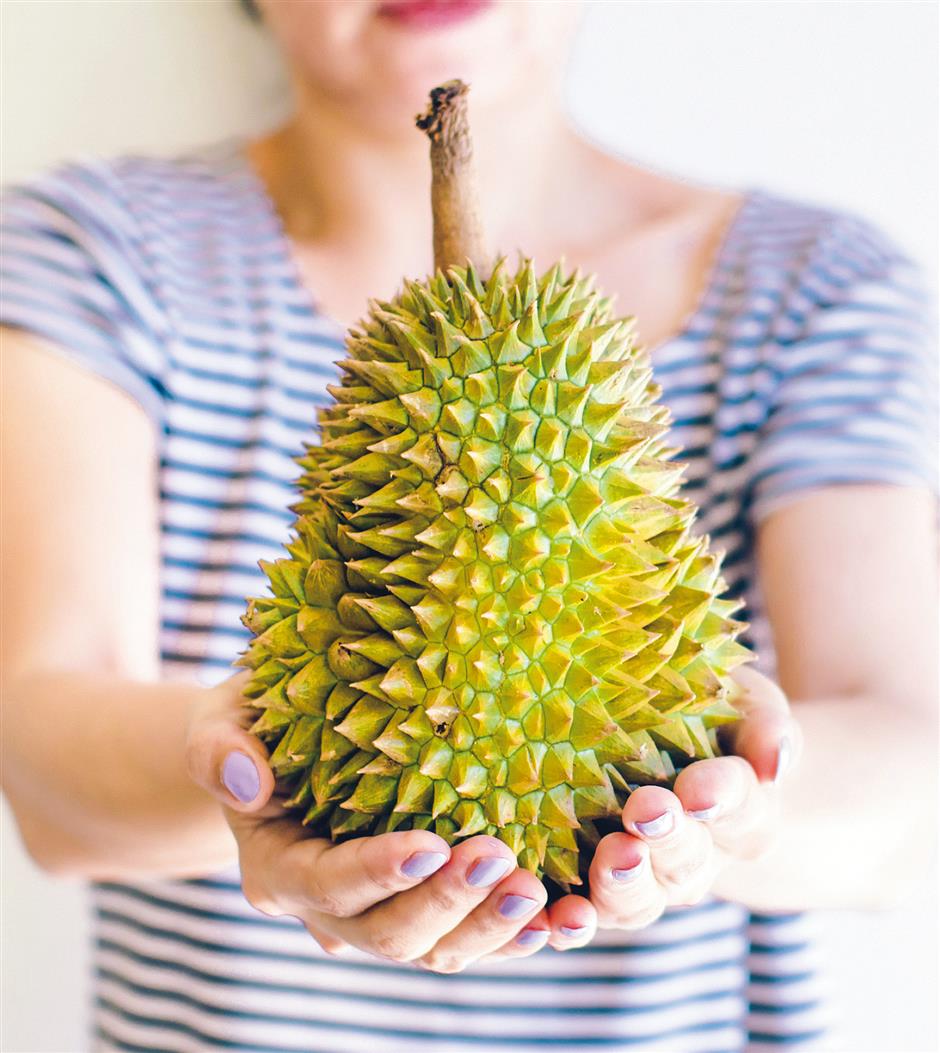 Durian is known as the king of tropical fruits. (Photos: Shine.cn)

The durian season is typically from June to August, so now is the best time to savor the fruit. 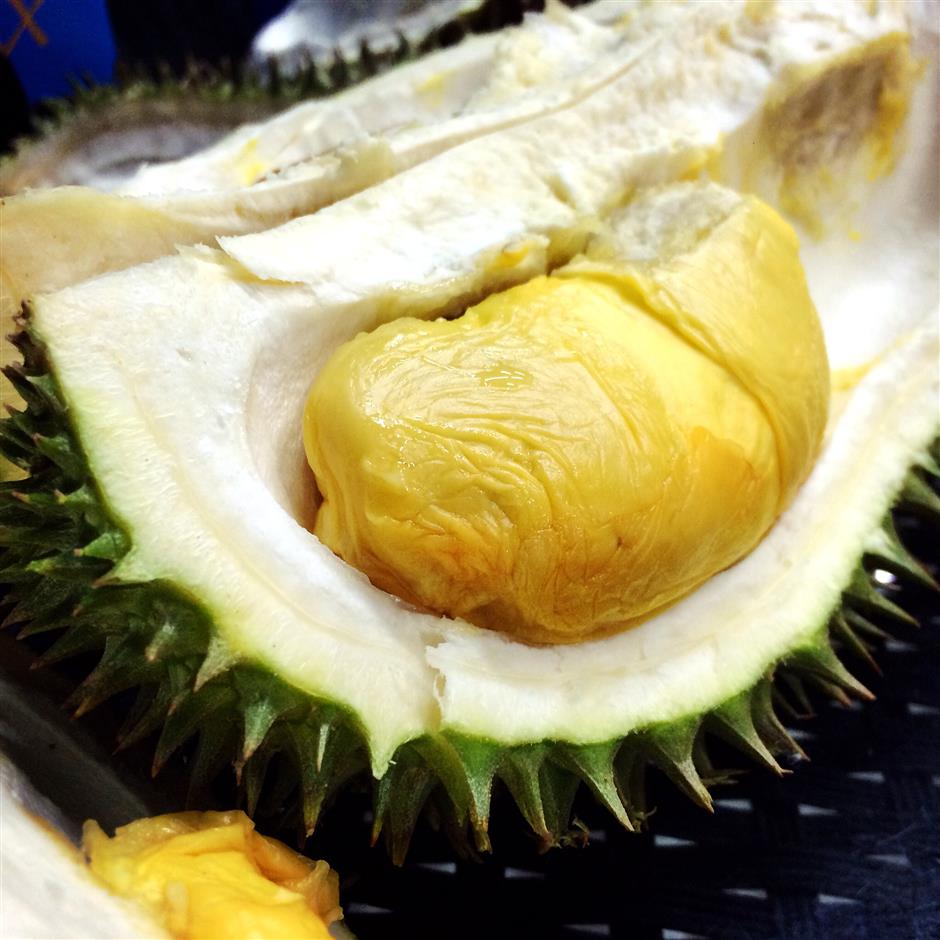 Apart from a few places in Hainan Province, China does not grow or produce durian, though the earliest record of durian in Chinese history dates back to the Ming Dynasty (1368-1644). 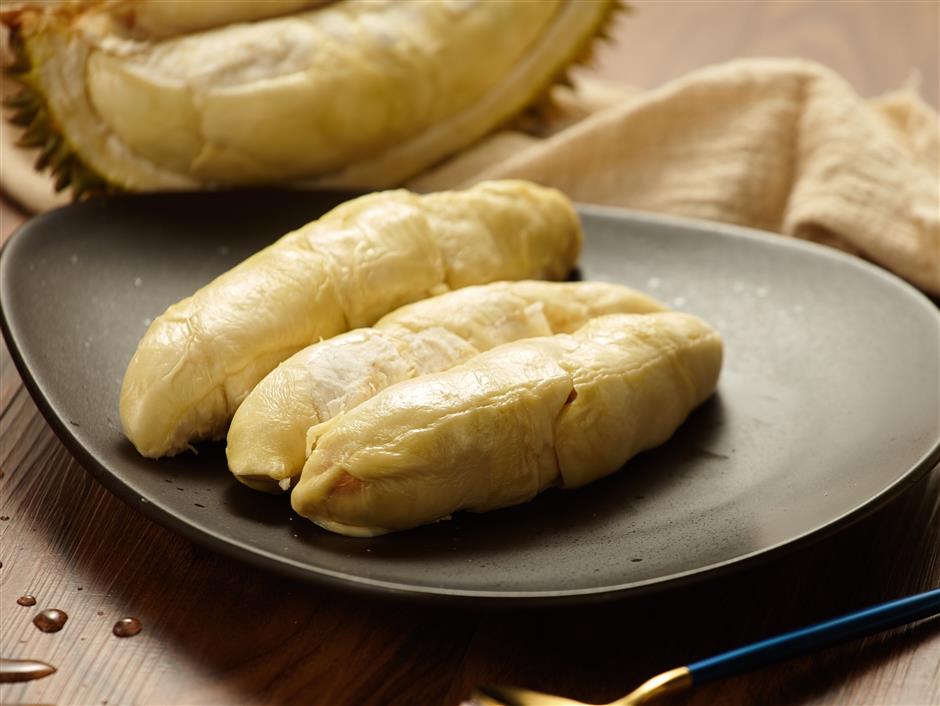 Now is the best season to enjoy durian, the stinky king of tropical fruits.

Ma Huan, an interpreter who went on voyages with famous explorer Zheng He, described the fruit in his book “Yingya Shenglan:” 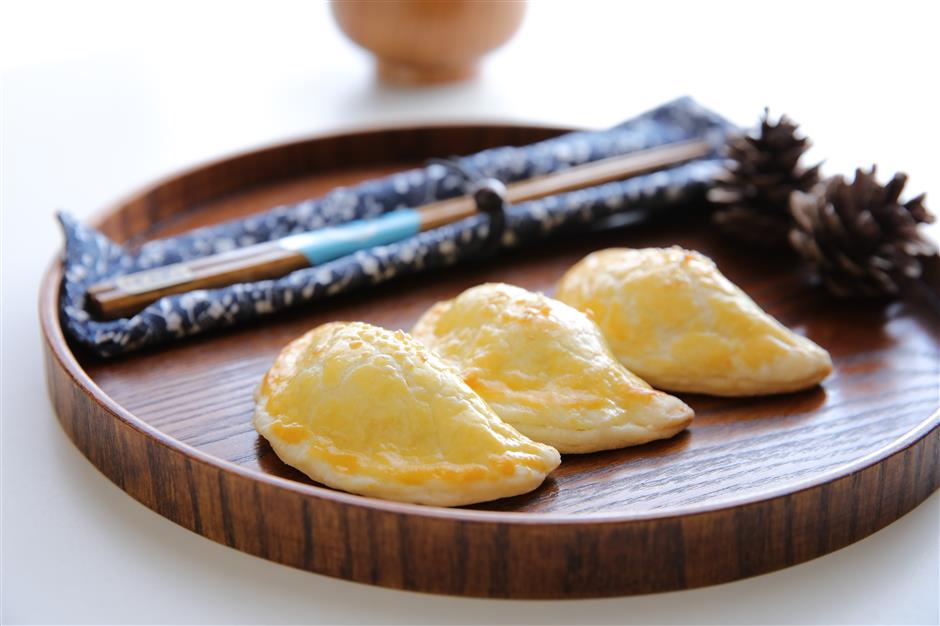 Durian pastry is a good start for people new to durian.

“There is a stinky fruit called ‘du’eryan’ (similar pronunciation as durian). It has the appearance of gorgon fruit with the length of 8 to 9 cun (27 to 30 centimeters). There’s sharp thorns on the skin and would crack up into five or six pieces if it’s ripe. It has the stink of rotten beef and contains 14 or 15 pieces of white flesh that’s sweet and edible, the seeds can also be eaten when fried and has the taste of chestnuts.”

The off-putting, rotten smell of durian is the result of compounds such as esters and ketones.

It takes courage to try the first bite of durian for people who are held back by the fruit’s unwelcoming and formidable stinky smell. But for those who have conquered the smell, eating the fruit can become an addiction.

There are numerous cultivars of durian that have distinct color, texture and flavor. The cultivars have a common name and a code starting with the letter “D.”

The premium Malaysian Musang King durian, D197, is highly sought after by consumers. Locally known as Raja Kunyit, this variety has a dusty, greyish green shell with broad and blunt spikes. Another characteristic to set Musang King apart from other varieties is the seam that looks like a starfish.

Musang King is known for the golden flesh that’s very thick and plump. It’s very sweet with a hint of bitterness and has an almost custard-like texture.

The Golden Pillow durian (Monthong) from Thailand is code-named D159. It’s favored by many people for the large proportion of flesh and sweet taste, and it’s cheaper than the Musang King.

The majority of the durian China imports, fresh and frozen, is from Thailand, Malaysia and Vietnam. The price of fresh durian is climbing year by year and the total import value has been more than US$1 billion since 2016.

When purchasing whole durian, select those with densely packed thorns. You cannot tell how much meat is inside the durian by looking at the thick thorny shell.

Because the strong odor is still quite disagreeable to a lot of people, durian is banned on public transport.

Durian has high nutritional value, especially thiamin. Packed with carbohydrates, durian can also supplement energy efficiently, and the fruit is used to fuel runners in events such as the TNF trail challenge in Beijing and Grand Wutai Pilgrimage in Mount Wutai of Shanxi Province.

Chinese consumers are also traveling to Southeast Asian countries to enjoy the ultimate durian feast, where they can sample the freshest durian at cheap prices.

Some countries even host sports to celebrate the fruit, like the Durian Run in Singapore, the participants of which must collect durian and run with them for 5 kilometers.

Last month, the Scenic Half Marathon 2018 in Chanthaburi, Thailand added a durian run as the last segment of the journey, with runners having to carry a durian in a 3-kilometer run. They can take the fruit home.

On the sweet side

Durian, a very sweet fruit, is most commonly used in baking and dessert dishes.

Crispy durian pastry is a popular dish that uses fresh durian as filling. The creamy and sweet fruit can be crushed and used directly without seasoning to highlight the original flavor.

You can also make quick durian pastry with store-bought puff pastry or egg tart pastry, brushing on egg wash and baking till cooked.

For people who are new to durian, the pastry is a nice way to start because the smell is milder and not as aggressive as the fresh fruit.

A similar idea also applies to durian-flavored ice cream, which has a much more toned-down smell but packs the distinct durian sweetness. 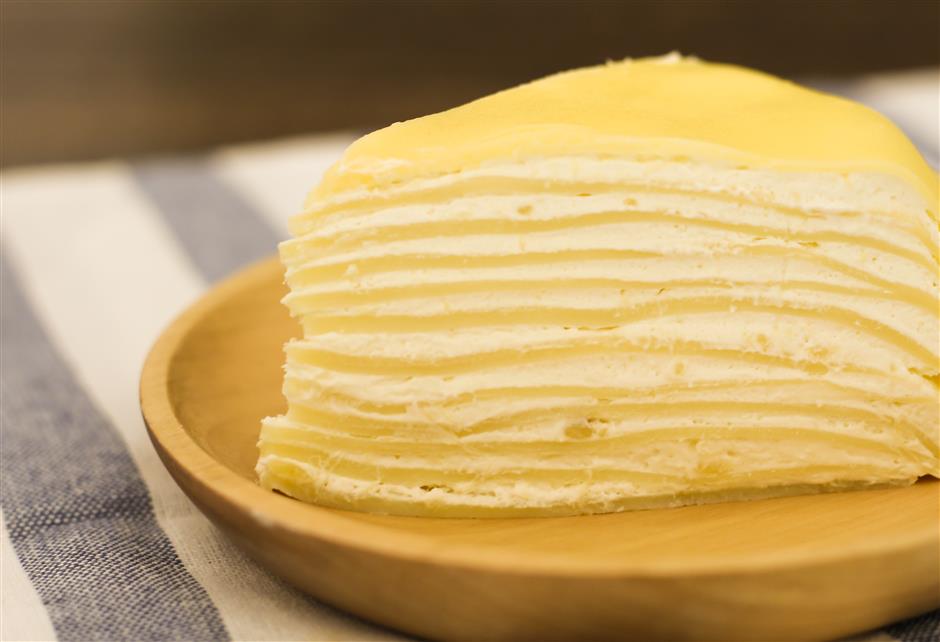 Durian mille crepe cake is a dish perfect for the summer season. The dessert, requiring only a non-stick flat pan, can be made at home with friends and family as a fun activity. Between layers of thin, eggy crepe, an airy cream with fresh durian meat is spread generously.

An easier version is the crepes roll that trended earlier this year. It’s known as the towel role because of its shape. The rolls are made by stacking a few crepes with the ends attached, then fill with the flavored cream and roll.

Durian pizza is another fusion creation that brings together durian and mozzarella cheese, two creamy and rich ingredients that surprisingly create a harmonious flavor.

If you are not afraid of the smell, roasting durian meat in the oven is a simple wintertime dessert, which maximizes the flavor and sweetness of the durian fruit.

On the savory side 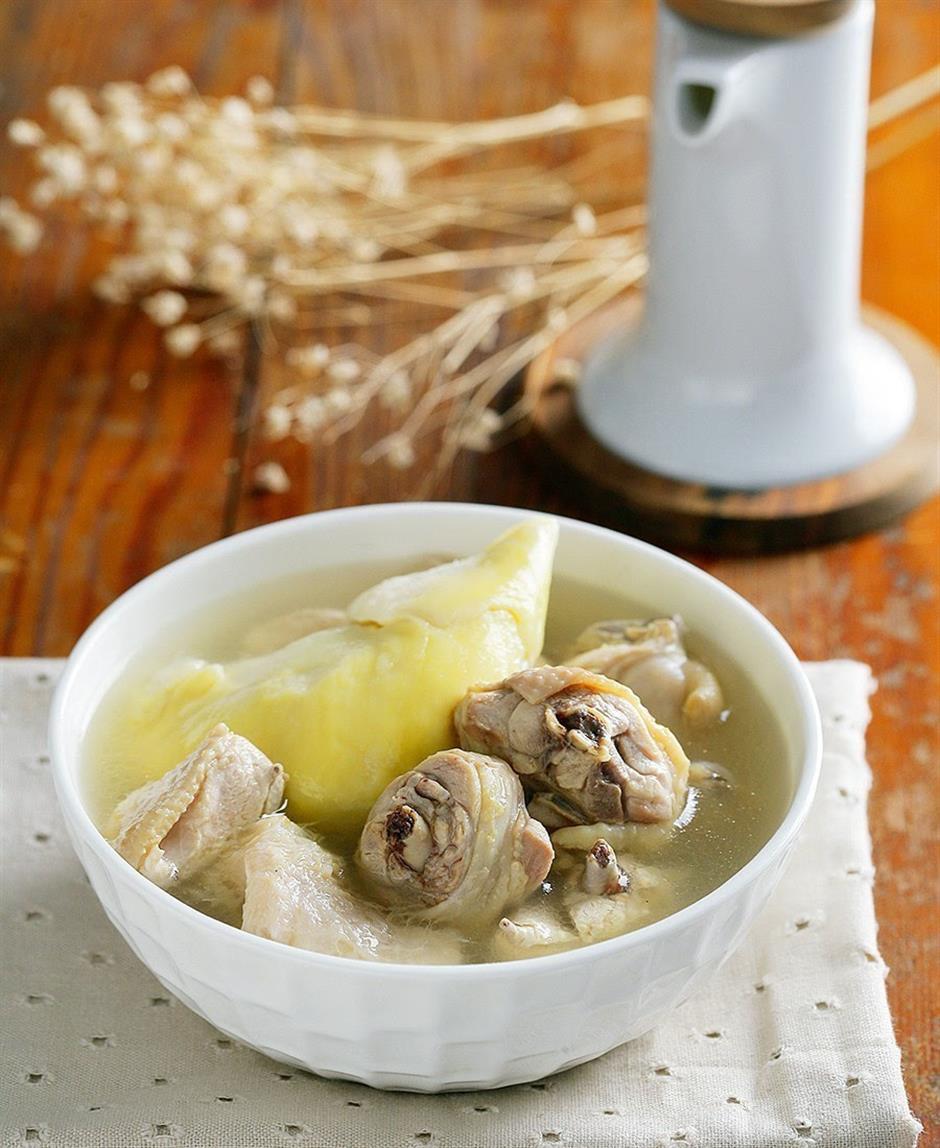 Durian is a quite versatile ingredient in cooking, and the whole fruit is actually edible.

The shell of durian can be stewed in chicken or pork rib soup, using the white parts after removing the thorny exterior. The property of the durian shell is not as strong as the flesh, and it doesn’t have a significant durian smell.

The shell can also make the color of the soup whiter.

You can also add durian flesh into the soup for a richer taste of the fruit. The seeds of durian can be stewed with the shell or alone with chicken.

Some people would add some fresh durian in the fried rice dish. The creamy durian blends with egg and rice very well and brings some sweetness to the savory staple.