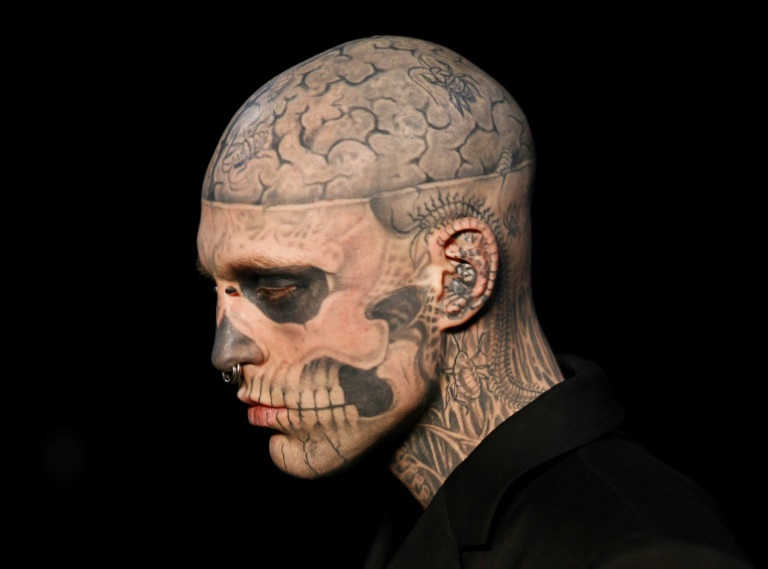 Rick Genest, also known as "Zombie Boy," held world records for having the most bones tattooed on his body and the most insect tattoos. (Photo: AFP)

Canadian model and artist Zombie Boy -- who was found dead of an apparent suicide at his home in Montreal -- used his head-to-toe tattoos to earn international notice, from the catwalks of Paris to a video for pop superstar Lady Gaga.

Zombie Boy, whose real name was Rick Genest, died this week in his hometown of Montreal, his agent Dulcedo Management said. He was 32.

The cause of death was not officially announced, but several Canadian media and Lady Gaga said he took his own life.

Lady Gaga, with whom he appeared in the clip "Born This Way" (2011), said news of her friend's suicide was "beyond devastating."

"The suicide of friend Rick Genest, Zombie Boy is beyond devastating," she said in a Twitter message. "We have to work harder to change the culture, bring Mental Health to the forefront and erase the stigma that we can't talk about it."

Dulcedo Management called him an "icon of the artistic scene and the world of fashion."

"The whole Dulcedo family is shocked and pained by this tragedy," the talent agency said in a Facebook post.

Genest was born and grew up in a suburb of Montreal.

At the age of 15, he had a brain tumor, according to Canadian media. A year later, he got his first tattoo and took the street alias Zombie while living in mostly abandoned buildings and immersing himself in Montreal's underground punk scene.

Within a few years, his tattoos had grown to cover 90 percent of his body, earning him two mentions in the Guinness Book of Records. He held world records for having the most bones tattooed on his body, and the most insect tattoos.

Montreal tattoo artist Frank Lewis was "responsible for inking the majority (of) the designs," according to Dulcedo Management.

These were generally morbid tattoos: a skull on his face, a brain on his head, and various bones and flesh-eating insects. His signature look gradually attracted the attention of the world of advertising, fashion and showbusiness.

On his website, Genest described himself as "part gentle warrior, part anti-establishment artful dodger," who has "serendipitously become the 'it' muse for anyone who believes in a brave new world without judgment."

"Zombies, to many, represent a pervasive xenophobia. As in my life, I was often out-casted, hated or misunderstood," he said in an interview with Wonderland magazine in 2012.

In 2011, his appearance in the Lady Gaga video launched his international fame.

From Paris to Milan, Berlin and New York, the model appeared in a growing number of fashion shows, notably for Thierry Mugler and for singer Jay-Z's ready-to-wear collection.

In 2012, he appeared in a L'Oréal advertisement that went viral on social media, and increased his number of followers worldwide (nearly one million subscribers to his Facebook page).

The next year, he also appeared in the movie "47 Ronin" with Keanu Reeves.

His wax double is on display at the Musee Grevin in Montreal, which sent condolences to relatives and fans, saying: "We had so much fun occasionally hanging out with Zombie Boy since the opening of the museum."

"I don't find him scary at all," Quinn told the Guardian for a story published earlier this year. "I find him rather amazing. He is an artist. His artwork is himself and let's face it, he does look pretty cool."