CHONGQING, April 10 (Xinhua) -- Jorah Kai Wood has lived in southwest China's Chongqing Municipality for six years. Keeping a diary since the novel coronavirus epidemic came up in China months ago has become an indispensable part of the Canadian writer's everyday life.

"I just wanted to record my life during the epidemic and show my friends what was going on in China when I first started to write a diary. However, it now has a new meaning," Wood said.

Wood, in his 40s, settled down in Chongqing in 2014 and married a local girl two years later. He is a teacher at a foreign language school and part-time editor of the local English website iChongqing. 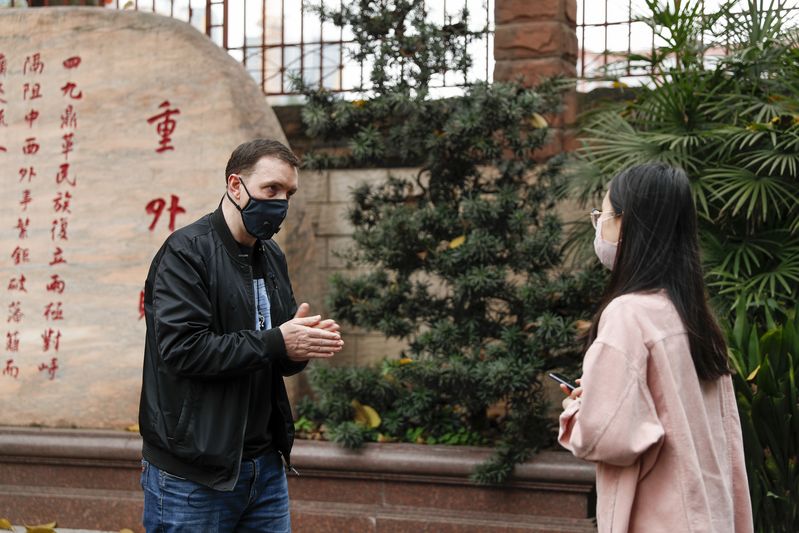 He posted his first diary on Jan. 20, when Zhong Nanshan, a renowned Chinese respiratory expert and head of a high-level expert team of China's National Health Commission, confirmed human-to-human transmission of the new virus.

From then until now, Wood has published more than 60 diaries, and he still updates the series frequently on his Facebook, iChongqing's website and other social media platforms.

In his first diary, he wrote that he had finished all of his work in the school at the end of the Year of the Pig, and his family was anxiously expecting the new year. He mentioned that "news is going around about a bad cold or virus in Wuhan, but that feels worlds away from me."

But he took action by making hummus with "extra garlic" hoping to "kill the virus."

On that day, China reported a total of 291 confirmed COVID-19 cases, including 270 in central China's Hubei Province, once the hardest-hit province of the deadly virus in the country. Chongqing reported zero.

Although Hubei is located next to Chongqing, in the eyes of Wood, residents did not take it seriously, and very few people wore masks back then.

In the next few days, as news coverage of more infections was reported across the country, Wood noticed more masked residents in public places.

The Spring Festival is the most important festival for the Chinese, as family members usually reunite during the week-long holiday. Wood's wife has a big family in Chongqing. They would usually celebrate the festival with over 70 family members and visit each other. However, because of the epidemic, there were only two family reunions this year, and only with the next of kin.

Wood said that, like some people, he was anxious about the invisible enemy in the early stage. He noted drolly: "Someone on the periphery sneezes and my lizard brain spins around and calculates distance and wind velocity. They're 15 meters away in an outdoor square, but I still hurry the family along the other way and pull my mask up."

On Jan. 25, Wood and his wife started self-isolating to prevent themselves from being infected.

"The anxiety did not last too long as the government quickly implemented effective epidemic control and prevention measures, and the residential communities worked closely with the government," Wood said.

He recorded in his diaries that thousands of doctors and nurses from different provinces and cities headed to Hubei to assist the battle. Restaurants and shops were shut down, while supermarkets checked customers' body temperatures and community workers across the country took strict actions and persuaded people to stay at home, as well as helped the old and infirm buy daily necessities.

"People in some countries said those measures could cause panic among the public. On the contrary, my experience can evidence those efforts are valid and effective, which finally subsided people's fears," Wood said. "Those measures that I wrote in the dairies are something new for people from other countries. I realized that I could help share that information, which could help people stay safe, and that was a big highlight for me."

Apart from recording the COVID-19 pandemic situation across the world, Wood also shared his home life in these trying times.

His wife's online dance course attracted more than 500 participants and nearly 1,500 viewers. He described how he and his wife put on protective gear such as masks, goggles and gloves to fetch his packages or shop in supermarkets.

"We must complete the 'decontamination procedures' when we come back home from outside: 1-minute hand washing, taking off masks, spraying disinfection, washing hands again and having a bath. After finishing all the procedures, we are back in our safe bubble," he noted.

Wood's diaries over the past two months have attracted global attention from media outlets to ordinary online users. More than 10,000 people across the world left messages for him on Facebook, and he was interviewed by Canadian CTV, which later showcased his diaries on its website.

"I told my followers that I felt safe here in China. We have enough food and water. China has done everything well," Wood said, adding when people asked him if he would return to Canada, he answered "I choose to stay here with my family."

"I also received warm greetings from my family and friends in Canada. They said they were inspired by the efforts that the Chinese have made," he said. "People from some countries thought that the Chinese overreacted, and the government had overdone in terms of epidemic prevention and control. However, since more countries and regions have been affected by the contagion, more people are aware of how appropriate and crucial China's epidemic control and prevention measures are."

Wood is now working with the New World Press, which plans to integrate Wood's diaries and publish a book for both domestic and overseas readers in multiple languages.

The book is named "The Invisible War," said Wood, who hopes to share China's anti-epidemic experience with more people from across the world.

"We have a very strong Chinese technique and method that we can share with the world. They allowed us to go back to work, how to save the economy, how to save the hospital system and how to save lives. Sharing the message is the most important thing I've ever done. It's my honor to do that," he said. "By offering my useful personal experience and telling the real situation of China's fight against the epidemic from the perspective of a foreigner, I wish they can build confidence to fight against the virus."