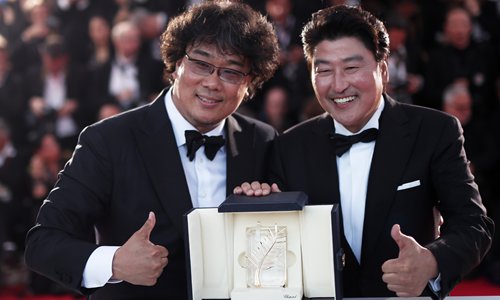 Many Chinese internet users reacted with bafflement at the cancelation for "technical reasons" of Parasite, an award-winning South Korean movie on Saturday.
The film was scheduled to screen Sunday at the closing ceremony of a 10-day Chinese film festival for promising film rookies held by the local government of Xining in Northwest China's Qinghai Province.
Parasite won Palme d'Or at 2019 Cannes Film Festival in May, becoming the first South Korean film to ever net the title.
It attracted more than 10 million moviegoers in South Korea since its domestic premiere on May 31 and has since been shown in more than 201 countries and regions, The Beijing News reported.
With the mark 9.2 out of 10 on Chinese review website douban.com, the film received a positive reaction from the Chinese moviegoers who had watched the film through other channels.
Many called the director a master and believed the film made not only the best film in Cannes but the best globally in the first half of 2019.
Six films have been withdrawn this summer and "technical reason" is one of the most popular killjoy phrases in Chinese officialdom.
For example, Chinese war epic The Eight Hundred was cancelled from its opening screening at the 22nd Shanghai International Film Festival in July due to "technical reasons." The film is not released so far.
Set during the 1966-76 Cultural Revolution and directed by veteran filmmaker Zhang Yimou One Second was withdrawn from the Berlin Film Festival in February also due to "technical reasons."
The news of the film's withdrawal promoted a debate on China's Twitter-like Sina Weibo. Many poured scorn on "technical reasons."
Others said that they have grown used to the reason but were still curious to know the relevant arcane technology.