CULTURE Cannes is empty, the day the film festival should have begun

Cannes is empty, the day the film festival should have begun 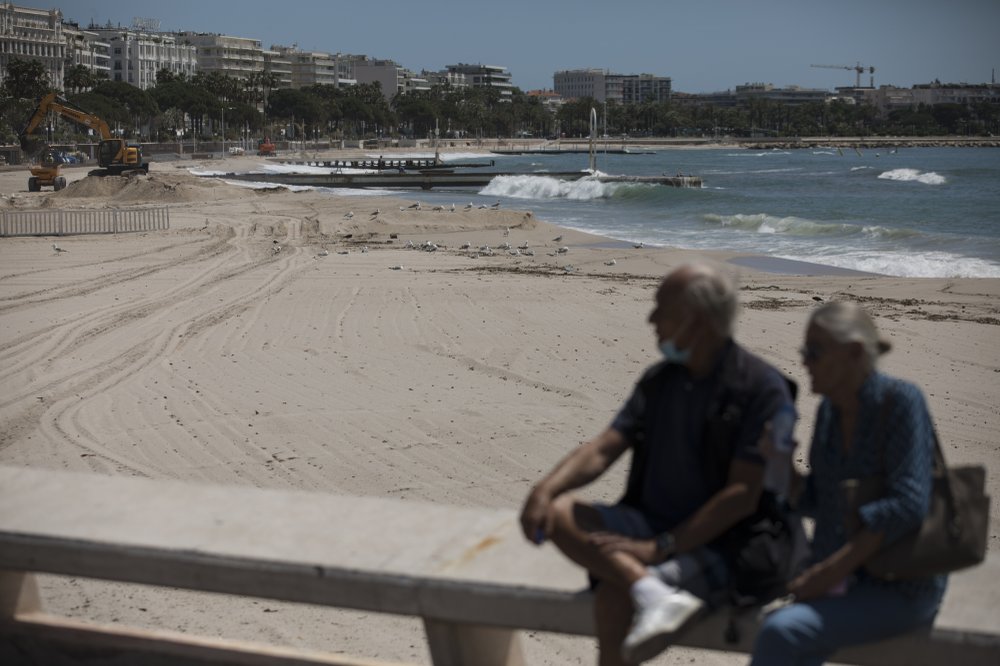 The deserted Croisette beach is pictured empty due to measures put in place to stop the spread of the coronavirus in Cannes, southern France, Tuesday, May 12, 2020. (Photo: AP)

The stars stayed home, their beach backdrop is closed and the prestigious grounds of the Cannes Film Festival have been repurposed as a homeless shelter.

Cannes should have been buzzing with cinema glitterati on Tuesday, which was scheduled as the first day of this year’s film festival. But during the time of the coronavirus, the French Riviera resort is nothing but a ghost town.

The world’s biggest film festival was canceled for the first time since World War II.

A couple of mask-wearing residents sit on the edge of the empty promenade to catch the morning sun, dangling their feet above the sand and next to an “Access and Swimming Prohibited” sign. An elderly group play petanque quietly next to the deserted roads.

The iconic billboard reserved for each year’s festival poster instead framed a large “THANK YOU” for the health workers caring for people during the pandemic.

“I’m overcome with a great sense of melancholy and nostalgia,” Cannes Delegate General Thierry Fremaux told Screen Daily about the festival going dark. “Cannes has only ever been canceled once, due to the Second World War, and stopped once, in May ’68.

“I could never have imagined something like this. Who could foresee that so many countries around the world would be caught out by the epidemic?” Fremaux said.

While the cancellation represents a blow to the movie stars and directors it promotes and honors, it has also devastated the legions of businesses and unsung subcontractors that rely on the Cannes Film Festival.

“For us, it’s really a very big loss. The festival represents a large part of our annual revenues so it’s very serious problem,” said Joseph Rappa, owner of a snack-vending kiosk.

For others, it’s even worse.

“There is no more work at all. We don’t know at all when things will resume,” Dambrine said.

The local government repurposed the festival’s building complex as a shelter in March. Every day, dozens of homeless people can be seen walking in a fenced-off area where journalists interviewed actors such as Marion Cotillard and Leonardo DiCaprio.

Some shops started reopening in France on Monday. In Cannes, some high-end boutiques such as Valentino and Saint Laurent were set to open their doors again from Tuesday, but the mood was gray. The famous Hotel Martinez, where many of Cannes’ stars stay during the 12-day event, will remain closed for at least one more month.

Fremaux has expressed pessimism about the immediate future of the film industry, but said it would rebound.

He said the cancellation of the 2020 events won’t stop the festival from recognizing film talent, and Cannes organizers plan to announce an Official Selection for this year at the beginning of June.