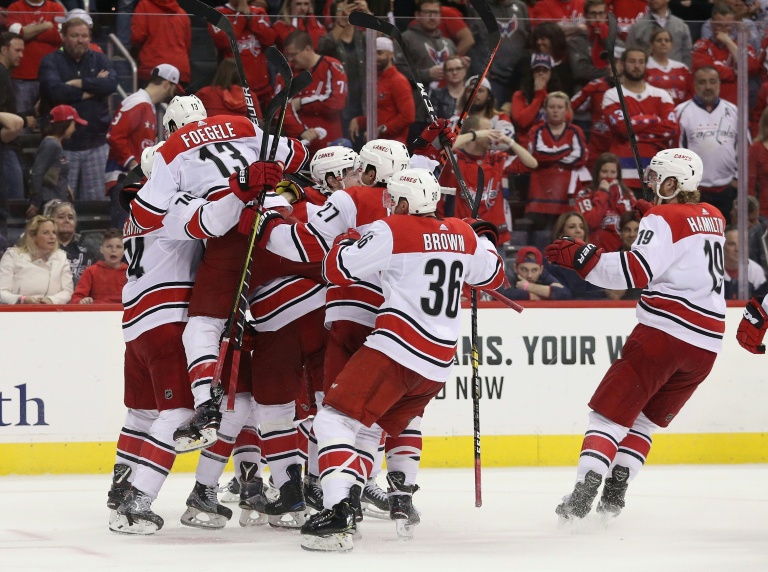 Brock McGinn scored the winner in double overtime as the Carolina Hurricanes sent the defending champion Washington Capitals crashing out of the NHL Stanley Cup playoffs on Wednesday.

McGinn's dramatic deflected close-range finish from Justin Williams' center sealed a 4-3 victory for the Canes, who had fought back from a 2-0 deficit in the first period of the game seven decider.

Carolina will now face the New York Islanders in the next round for a place in the Eastern Conference finals.

The Hurricanes win completed a remarkable series for the wild card entrants, who were beaten in the opening two games of the series.

"We wanted to go as far as we could," the 37-year-old former Capitals player said. "It feels great right now.

"I can't say enough about this team. Time and time again we've just manned up. It would have been easy to pack it in, especially against a team like that.

"We just had the belief all along that we could do it. Anyone can say it, but actually doing it and believing we could do it is something else. Every single guy played a part in this."

The Caps had appeared to be motoring towards the next round after Andre Burakovsky and Tom Wilson fired them into a 2-0 lead before a raucous home crowd at the Capital One Arena.

Sebastian Aho reduced the deficit for the Canes at 9:51 of the second period when he rammed home his rebound after Capitals goalie Braden Holtby failed to glove.

Again though, the Hurricanes refused to roll over. Teuvo Teravainen gave his team a lifeline with a goal at 16:37 of the second period, before Jordan Staal scored in the third to tie it 3-3.

After a nervy first spell of overtime finished scoreless it was left to McGinn to deliver the coup de grace, flicking in Williams cross for the series-clinching goal.