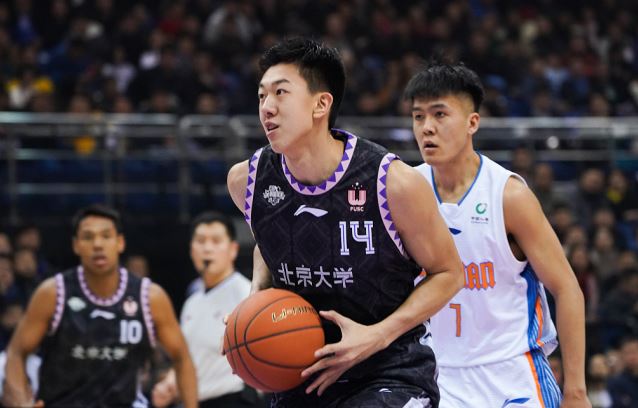 CBA rookie stars were stunned by the college stars 90-88 here on Saturday in the 2018-2019 season CBA All-Star Rookie Challenge.

With 71.5 percent rate of three-pointers, the North-South College United Team grabbed a 29-22 lead in the first quarter before their opponents clawed back before the break.

The academic team launched a 6-0 run in the third quarter and Wang Shaojie buried three 3-pointers down the stretch to nail down the win.

Wang Shaojie of Peking University won the trophy of the Most Valuable Player (MVP) as he scored 13 points and 10 rebounds.

"MVP is a lucky surprise for me!" Wang Shaojie said after the game.

"This is my second All-Star game, and I feel more relaxed." Wang said, "We had the chance as well in last year, but we lost. This year, we took it!"

In the Dunk Contest, Wang Tong from Shanghai Sharks shined with 97 points from two dunks. He will face challeng from Huang Rongqi from Sichuan Blue Whale and Zhang Jianhao from Guangdong University of Technology in Sunday's final.

Yu Changchun from Nanjing Tongxi Dasheng took the first place in the Three-Point Shooting Contest with 20 points, and Chen Linjian from Fujian Sturgeon and Du Runwang from Guangdong Southwest Tigers were also qualified.

Jiang Weize from Jilin Northeast Tigers headed into the Technics Challenge final with 32.8 seconds, followed by Chen Shuaipeng from Zhejiang Chouzhou with 35.3 seconds.