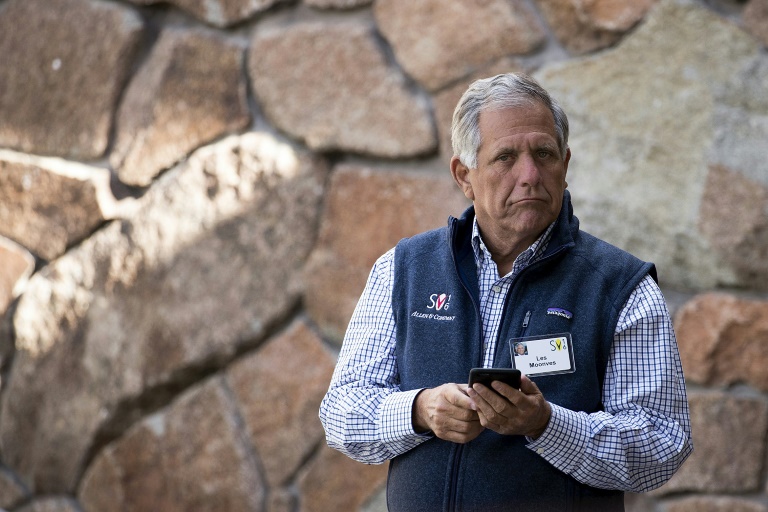 Leslie Moonves, who transformed CBS into a ratings winner after joining the network in 1995, is one of the most powerful American men implicated in the #MeToo era that ignited last year after the career implosion of Harvey Weinstein. (Photo: AFP)

CBS CEO Leslie Moonves trumpeted second quarter earnings on a conference call with investors Thursday, making no mention of sexual misconduct allegations from six women being investigated by outside lawyers.

Moonves, who transformed CBS into a ratings winner after joining the network in 1995, is one of the most powerful American men implicated in the #MeToo era that ignited last year after the career implosion of Harvey Weinstein.

On Thursday he broke his silence to lead the conference call, which opened with an executive announcing that "on the advice of counsel" questions would be limited to the quarterly results.

Moonves powered through an upbeat summary of the corporation's growth and investors played the rules, refraining from any questions about the allegations revealed in a New Yorker article last Friday.

Six women told the magazine that Moonves sexually harassed them between the 1980s and late 2000s. The New Yorker article also painted a broader picture of similar behavior within the most watched US television network.

The CBS board announced Wednesday it had hired law firms Covington & Burling and Debevoise & Plimpton to conduct "a full investigation" of the allegations against Moonves and "cultural issues at all levels of CBS."

The investigation will be led by Nancy Kestenbaum and Mary Jo White, who was chair of the Securities and Exchange Commission during the Obama administration and a former US attorney for Manhattan.

Moonves, 68, acknowledged last week that "decades ago" he "may have made some women uncomfortable" and expressed regret but denied ever having retaliated by harming anyone's career.

His wife, "Big Brother" show host Julie Chen on CBS has come out publicly in his support, as have several women executives at CBS.

Moonves has recused himself from a commission on eliminating sexual harassment, which was set up last year in a bid to make the entertainment industry safer and more accountable in the wake of the #MeToo reckoning.

The University of Southern California School of Cinematic Arts has also suspended Moonves from its board, saying it "takes the recent allegations very seriously."