Japanese animation Cells at Work! aired on the national broadcaster China Central Television (CCTV), the first Japanese show to be released by CCTV in more than a decade. The move has been hailed by Chinese comic fans and was also interpreted as a sign of improving relations between China and Japan. 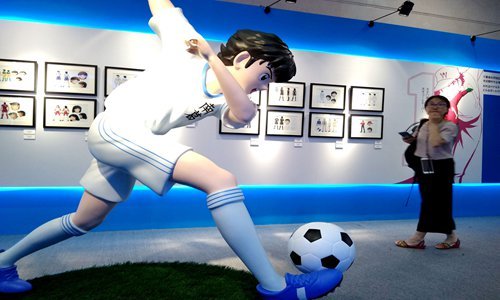 A model of the young soccer player from the Japanese animation series, Captain Tsubasa is on display at an exhibition in Shanghai. Photo: VCG

The animation features the anthropomorphized cells of a human body and tells how cells work in the body, with the two main protagonists being a red blood cell and a white blood cell she frequently encounters.

“I have not watched such imaginative and educational animation for a long time,” one viewer said.

The edition that has aired on CCTV since February 13 has Chinese dubbing, which makes it more accessible to viewers.

A related hashtag “when cells speak in a northeastern Chinese accent” has been hot on China’s Twitter-like Sina Weibo since Sunday. The dubbing of some red blood cells uses a northeastern accent, amusing Chinese netizens and making them more interested in watching the animation.

The Chinese National Radio and Television Administration stipulated in 2006 that foreign animations cannot be aired on satellite channels from 5pm to 8pm and the restriction extended to 9pm in 2008. Co-produced animation must also seek the administration’s approval before airing during the period.

Though foreign animations are not banned for all time slots, Japanese animations have been heavily affected. There is no record of any Japanese work being aired on CCTV in the past 14 years, Japanese media reports said.

Before being broadcast on CCTV, the first season of the animation had been officially introduced in 2018 by Chinese video site Bilibili. It is rated 8.9 out of 10 on Douban, a film and television review platform.

The return of Japanese animation to CCTV is a positive sign showing the importance that the Chinese government attaches to improving relations and mutual understanding via cultural exchanges, experts noted.

China and Japan reached a consensus on establishing bilateral relations that meet the requirements of the new era in November 2020, which paved the way for building a friendly environment for cultural exchanges between the two countries this year, said Zhang Yong, secretary general of the Center for China-Japan Relations at the Institute of Japanese Studies under the Chinese Academy of Social Sciences.

Airing the Japanese educational animation may also be part of the preparation to create a friendly atmosphere for celebrating the 50th anniversary of the normalization of China-Japan diplomatic ties in 2022, Zhang told the Global Times on Monday.