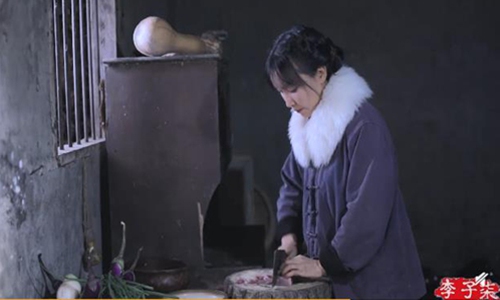 A Chinese celebrity vlogger Li Ziqi, with millions of international followers, is under the spotlight for her earnings from videos and online shops, although her company on Friday denied that she earns 168 million yuan ($23 million) a year.

The company of Li, the Chinese internet celebrity known for her videos in which she poses as a farmer to cook traditional Chinese food and share her rural lifestyles, said the reports claiming Li earns 168 million yuan a year were fake, as the food industry usually has low profits.

The post speculating on her earning has been widely circulated on China's social media since December 2019.

So far, Li has shot more than 100 videos, and her videos have attracted more than 20 million fans on Chinese social media platform Weibo and another 8.2 million subscribers on YouTube.

In one video, she rides a horse while wearing a long red cape, and in another, she builds bamboo furniture from scratch.

The topic "Li denies annual salary of 168 million yuan" on Weibo has drawn 400 million views as of press time.

Some netizens said there is no need to speculate about Li's earnings as long as she has not done anything illegal, and some said it's obvious that she has great commercial value, and that it's more important for her to improve the quality of the food she sells online.

She opened a shop on China's e-commerce platform Taobao, selling traditional Chinese food and sources for up to 450 yuan a pack. One of her best-selling instant rice noodles, which sells for 35 yuan, has received more than 350,000 orders. She also has an English language shop website that sells food, herbal tea, and her fairy-style clothes.