Celebrated Chinese filmmaker Zhang Yimou made a triumphant return to the Venice Film Festival on Thursday with the world premiere of his latest film, Ying (Shadow).

Zhang, whose work has influenced generations of Chinese directors, was also awarded the Jaeger-LeCoultre Glory to the Filmmaker prize, which is dedicated to "a figure who has left a particularly original mark on contemporary cinema." 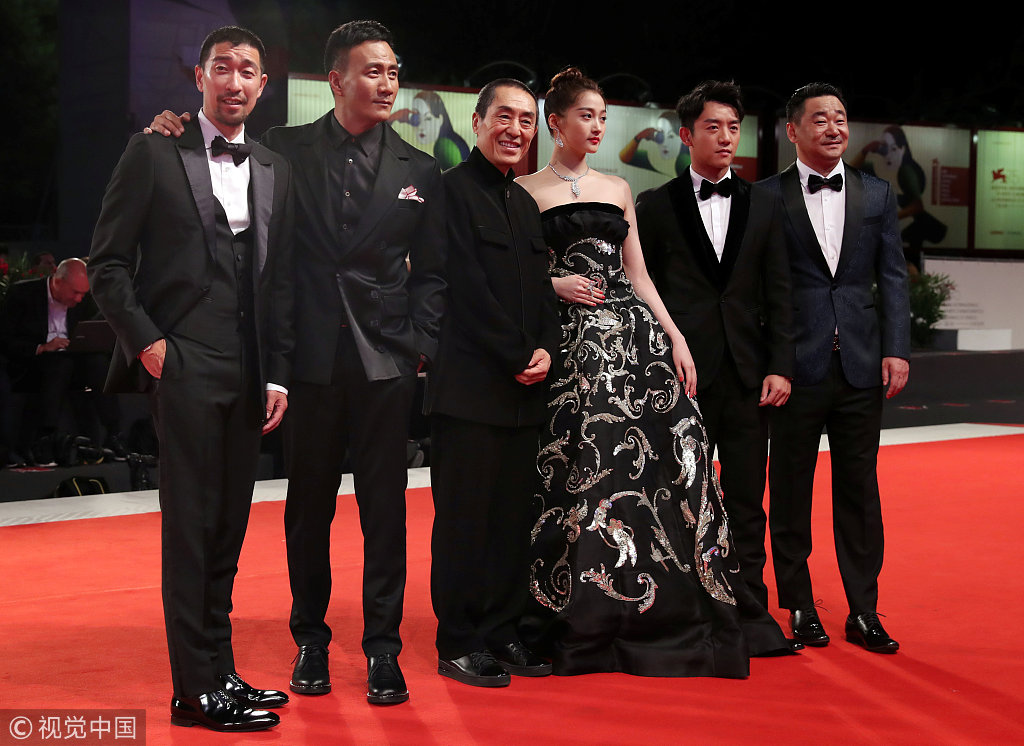 "We have the return (after almost two decades) of a great master of Chinese cinema," Venice Film Festival Director Alberto Barbera told Xinhua.

In 1991, Zhang won a Silver Lion for Raise the Red Lantern, following it up with a Golden Lion in 1992 for The Story of Qiu Ju, which also garnered Gong Li a Coppa Volpi prize for Best Actress, and another Golden Lion in 1999 for Not One Less.

"Zhang Yimou is back with a wonderful movie, which I'm sure will travel all over the world, (in a) welcome return to a kind of cinema that is interesting from every point of view, because it's a cinema that could please the audience, but at the same time is visually strong," said Barbera.

Ying, which screened out of competition, is a martial arts (wuxia) film set in China during the period of the Three Kingdoms (220-280 AD) and tells the story of body double -- "shadow" men who substituted royals and aristocrats in times of danger, ready to sacrifice their lives so their masters could live.

"A shadow must seamlessly meld with the real, so that true and false can't be distinguished," said Zhang. "I liked the idea of these political substitutes -- the body doubles whose stories have never been told before."

Told in elegant visuals in a desaturated palette that draws on China's centuries-old tradition of ink brush painting, the movie alternates scenes that rich in exquisite visual composition with dazzling battle sequences.

Zhang explained that in order to achieve the visual style of his film, he did not rely on computer effects but rather created sets that were "as complete as a painting" in terms of design, costumes, makeup, and lighting, while the battle scenes involved a month of shooting in the rain.

The master filmmaker added that while "we are all bound by the invisible laws of history", in this movie he wanted to show "how a common man can manage not only to survive amid the power games of kings and the aristocracy, but even manage to turn defeat into victory."

He said that the role of the king's sister, played by 21-year-old supporting actress Guan Xiaotong, represents "today's young Chinese women, who are driven by their strength of character and who don't let themselves be used as pawns in the games of others -- (the king's sister) pursues her own dignity, and exacts revenge when she is offended."

"I will continue to make movies in which women play a key role in expressing my vision," Zhang said.

In the course of his long and distinguished career, the acclaimed Chinese director who is now in his late 60s has won dozens of awards around the world, and garnered several nominations for the Palme d'Or at Cannes.

In 2002, his martial arts film Hero won him his third Oscar nomination for best foreign-language film, establishing him as an icon of the Chinese cinema at the global level and garnering him the direction of the opening and closing ceremonies of the 2008 Olympics in Beijing.

The Venice Film Festival, now in its 75th year, ends on Sept. 8.