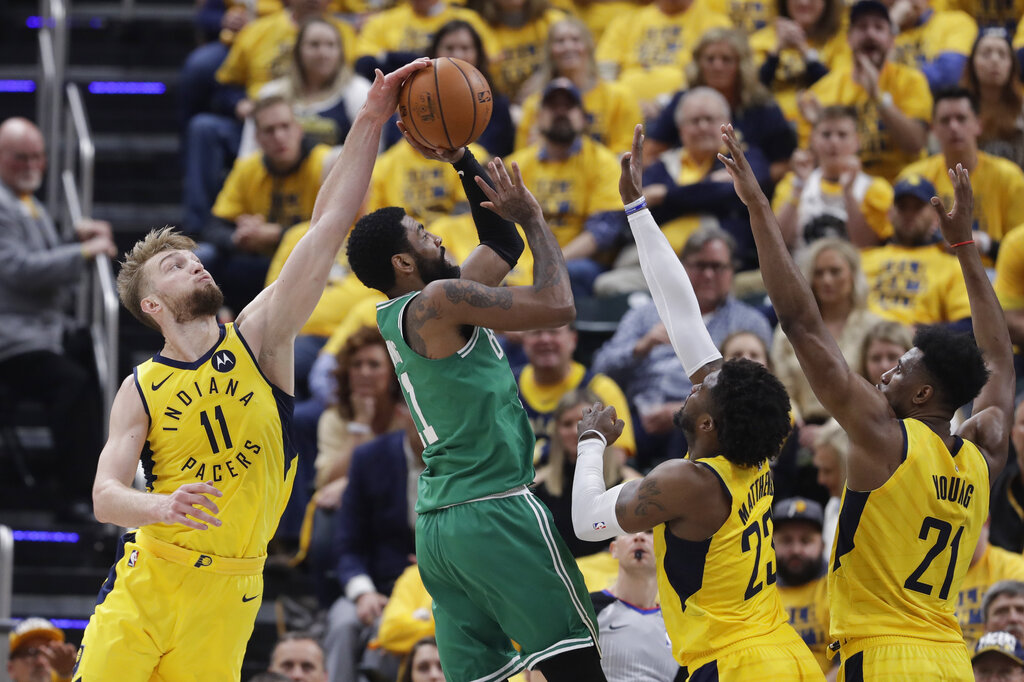 Boston Celtics' Kyrie Irving (11) has his shot blocked by Indiana Pacers' Domantas Sabonis (11) during the first half of Game 3 of an NBA basketball first-round playoff series Friday, April 19, 2019, in Indianapolis. (Photo: AP)

Three games into their first-round playoff series, it's still working.

Another dominant second-half defensive performance Friday night helped the Celtics retake control of the game and another late scoring run helped them pull away from Indiana for a 104-96 victory and a 3-0 series lead.

"We've come a long way," All-Star guard Kyrie Irving said. "We're all making sure we're giving each other confidence and doing the little things to ensure we win. When you have that type of camaraderie, executing is a lot easier. Now that the stakes are higher, we're settling into who we want to be."

While the names and numbers seem to change on a daily basis, the results have remained strikingly consistent.

The Celtics turned Game 1 by limiting Indiana to eight third-quarter points and won by 10. In Game 2, the Celtics erased a double-digit deficit by allowing just 12 fourth-quarter points as they won by eight. This time, it was a 12-point third quarter that swung the momentum, leading Boston to its sixth straight win over Indiana — all since January.

If they can do it one more time Sunday, last year's Eastern Conference runner-ups will be headed to the conference semifinals.

It seems Boston has an answer for every adjustment the Pacers make.

With the league's best defense focused on holding Irving in check Friday, Brown went 8 of 9 from the field and grabbed seven rebounds Jayson Tatum added 18 points and seven rebounds and Irving was still productive with 19 points, 10 assists and five rebounds.

For Indiana, it has been a nightmare of a series.

After charging back from a 15-point first-quarter deficit to take a 61-59 halftime lead, Myles Turner opened the third with a 3-pointer to give the Pacers a five-point lead. Tyreke Evans matched his playoff career high with 19 points, 12 in the second quarter.

But then the Celtics did it again.

When Indiana's offense bogged down in the third, Boston scored eight straight points to retake the lead, closed the quarter on a 9-2 run and delivered the final blow with a 10-4 spurt late in the fourth to make it 98-92.

"In the third quarter, we lost our patience," Pacers coach Nate McMillan said. "We took quick shots, bailed them out, and lost our rhythm."

Celtics: Tatum also had seven rebounds while Al Horford finished with 16 points and eight rebounds. ... The Celtics finished 15 of 34 on 3s after making 8 of 10 in the first quarter. ... Boston scored 41 points in the first quarter, the most Indiana has allowed in the first in its NBA playoff history. The Lakers set the previous mark, 38, during the 2000 NBA Finals.

Pacers: Bojan Bogdanovic scored 15 points and Thaddeus Young had 11 points and nine rebounds. ... Domantas Sabonis finished with 12 points, seven rebounds and six assists while Myles Turner scored 13 points, matching his total from the first two games of the series. ... Wesley Matthews had 11 points and Darren Collison scored 10. ... Indiana went 11 of 30 on 3s after making 8 of 15 in the first half. ... The Pacers committed no turnovers in the second quarter. ... Indiana now faces its second sweep in three years after never previously being swept in a best-of-seven series.

All-Star guard Victor Oladipo was expected to return to Bankers Life Fieldhouse for Game 3. Instead, bad weather in Florida prevented him from making it back.

Oladipo hasn't appeared publicly in Bankers Life Fieldhouse since he was wheeled off the court on a stretcher with a ruptured quad tendon in his right knee In January. His presence was supposed to give the Pacers an emotional boost.

The Pacers have not said if Oladipo will return for Game 4.

Celtics: "I think he's fine. Turns out if you play 16 straight minutes, it cure all ills," Celtics coach Brad Stevens said when asked about Horford's availability for Game 3.

Pacers: "It comes down to the third quarter. We've just got to figure out how to get off to a better start," Evans said.

Game 4 is Sunday in Indianapolis.