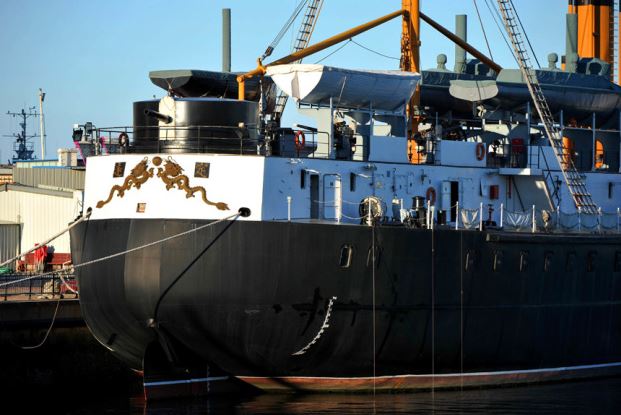 JINAN, Sept. 17 (Xinhua) -- More than a century later, the sun shines onto the same sparkling blue sea under which Chinese battleships sunk by the invading Japanese fleet in 1894 have been in darkness ever since.

This year marks the 125th anniversary of the First Sino-Japanese War, commonly known in China as the Jiawu War. A battle on the Yellow Sea broke out during the war on September 17, 1894.

Earlier this month, archeologists confirmed the wreck site of the Dingyuan Battleship, a flagship vessel of the Beiyang Fleet of the Qing Dynasty (1644-1912), in the Yellow Sea.

The discovery came after two months of a joint underwater survey. Based on previous surveys in 2017 and 2018, archeologists used mapping and imaging technologies to survey the site and sucked out thick layers of sand to expose part of the sunken ship hull, said Zhou Chunshui, head of the survey program.

With a displacement of 7,670 long tons, Dingyuan was built in Germany by the commission of the Qing Dynasty. It was damaged after being torpedoed by the invading Japanese fleet in February 1895, before its captain ordered it scuttled to prevent it from falling into enemy hands.

A 28.73-meter-long and 0.47-meter-thick iron plate provided strong evidence that the shipwreck was part of Dingyuan.

"In the Beiyang Fleet, only ironclad battleships like Dingyuan were protected by an armor belt of such thickness. And our assumption was supported by the shipbuilding contract," said Wang Zebing, an official with the Shandong Underwater Archaeological Research Center.

On July 25, 1894, the Japanese fleet attacked two Chinese vessels off the Korean port of Asan. At the time, Korea was a tributary state of the Qing Empire. By March 1895, the Chinese army and navy were routed, which was the first time that China had been defeated by Japan in a military conflict.

Most warships of the Beiyang Fleet, set up in 1888 on Liugong Island, eastern China's Shandong Province, were sunk by the Japanese navy during the war, widely seen as a reminder of how China had suffered from foreign invasion.

In 2014 and 2018, the other ironclad battleship, Zhiyuan, and an armored cruiser, Jingyuan, from the Beiyang Fleet were discovered. Repair work of the relics is still underway.

"Underwater relics repair is time-consuming as it involves desalination and dehydration," said Liu Sheng, head of the repair work.

The discovery of the Dingyuan battleship is another step forward in the research on the history of the Chinese navy, warships and the First Sino-Japanese War, said Jiang Bo, an official with the Underwater Cultural Heritage Conservation Center of China National Cultural Heritage Administration.

"The wreck was in 'poor condition,' and the entire superstructure of the ship has disappeared, providing a main challenge for the salvage work," Zhou said. "After the war, Japan took some components of Dingyuan as a prize of war and used them to build a house in Fukuoka."

Near the Liugong Island moors a floating museum of the Dingyuan Battleship, a replica of Dingyuan. It was constructed in 2003 on a scale of 1:1.

To commemorate that period of history, records of Dingyuan, the Beiyang Fleet and the First Sino-Japanese War are exhibited.

The exhibition is concluded by lines that read: "The heroic battleship of Dingyuan and the history behind it have revealed the importance of safeguarding national maritime rights and interests. It will act as a navigation mark for China when strengthening its maritime development."

"History is like a mirror. Discoveries of the sunken ships are of great historical significance and highly relevant to the great rejuvenation of the Chinese nation," said Guo Yang, curator of the Jiawu War Museum.