Chargers-Ravens in wild card is rematch of late-season game

It’s been six years since the Ravens hosted a playoff game, so forgive Pro Bowl guard Marshal Yanda for forgetting protocol regarding the distribution of tickets. 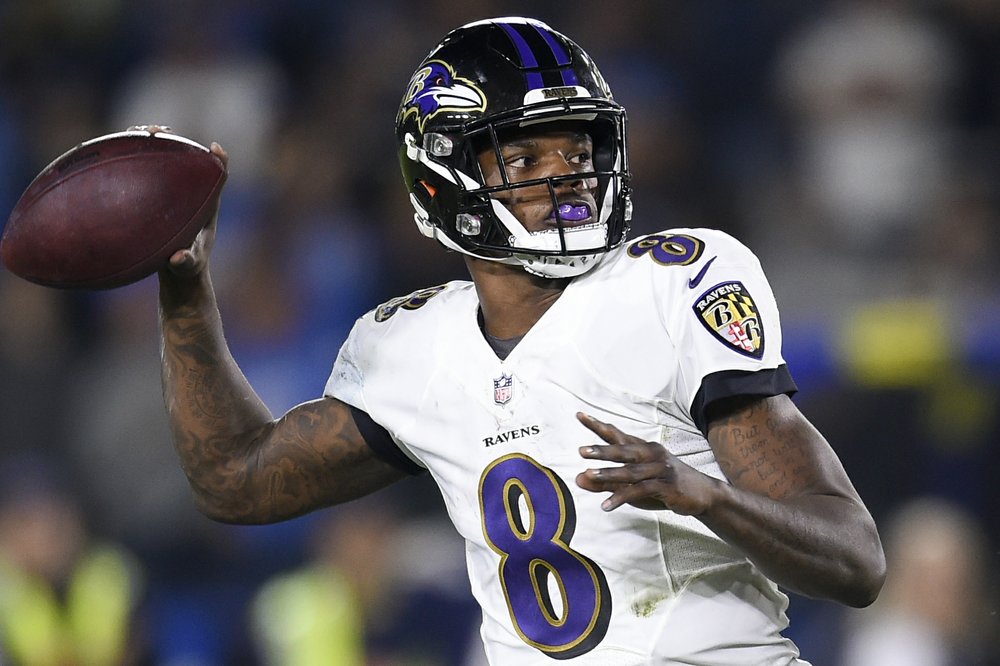 FILE - In this Saturday, Dec. 22, 2018 file photo, Baltimore Ravens quarterback Lamar Jackson passes against the Los Angeles Chargers during the first half in an NFL football game in Carson, Calif. The Ravens are making their first postseason appearance since 2014. (Photo: AP)

“Somebody was asking me if we got tickets during the playoff games, and I couldn’t really remember,” he said this week. “I was like, ‘Uh, it’s been a little while.’”

The last time Baltimore was at home in the postseason was in 2012, when linebacker Ray Lewis and quarterback Joe Flacco engineered a 24-8 victory over Indianapolis to launch a surprising Super Bowl run.

Lewis is now in the Hall of Fame, and Flacco will be on the bench when rookie Lamar Jackson and the Ravens (10-6) face the Los Angeles Chargers (12-4) in a wild-card game Sunday.

It’s a rematch of a pivotal contest two weeks ago, when Baltimore took control of the AFC North with a 22-10 victory that dropped the Chargers to the No. 6 seed. The Ravens’ top-ranked defense limited Los Angeles quarterback Philip Rivers to 181 yards passing with two interceptions.

“You know they’re going to come back with changes, with wrinkles, and they’re going to play that much harder, because they know what happened the first game,” said Ravens safety Eric Weddle, who played nine years with the Chargers before signing as a free agent with the Ravens in 2016.

The game plan is important, but minimizing errors is what really counts.

“I don’t think it’s going to be a big secret as to what everyone is doing,” Los Angeles coach Anthony Lynn said. “It’s just whoever executes the best is going to win this game.”

If experience means anything at quarterback, the Chargers have the edge. The 37-year-old Rivers has been flinging the football in the NFL since 2004 and has started nine playoff games.

Jackson, a junior at Louisville just a year ago, has been a starter for just under two months. The 21-year-old will be the youngest quarterback ever to start in the postseason.

But the Ravens are 6-1 with Jackson as a starter, and his ability to run has turned Baltimore’s offense into a very efficient unit.

“There’s no substitute for experience,” Ravens offensive coordinator Marty Mornhinweg said. But he quickly added: “Now sometimes, it’s the quality of experience as well. Man alive, look at all the things he’s done — a very mature young man for that age in many, many ways. And, he’s a very confident guy.”

Some other things to know about the first meeting playoff game involving the Ravens and Chargers:

This is the Chargers’ first postseason appearance since the 2013 season, and second since 2010.

“When you’re younger you think this is it; you get a shot every year,” Rivers said. “Then when you go once in the last nine or 10 years, you realize how fleeting it is and how hard it is to get in.”

Baltimore is coming off a three-year playoff absence.

“Coming into this league, playing these games, this was what you hoped for,” said Ravens linebacker Matthew Judon, who broke into the NFL in 2016.

The Chargers have been outscored 43-14 in the first quarter the past six games. Rivers has thrown an interception on the opening drive the past three games, which has resulted in 10 points for the opposition. In the first 10 games, Los Angeles outscored teams 64-55 over the first 15 minutes.

“It’s something we’ve talked about and it’s definitely something that we can’t afford to do,” offensive coordinator Ken Whisenhunt said of the recent poor starts. “That’s what our goal is going into this game.”

ALL ON THE LINE

With the Chargers’ linebackers undersized because of injuries, the defensive line will need another good game. Joey Bosa has four sacks in six games since missing the first 10 with a foot injury.

The Chargers had three sacks in the first meeting against Baltimore, but Jackson also had plenty of plays in which he was able to move up in the pocket to complete passes in his lone 200-yard game.

“There is such a thing as a good missed tackle, as long as you go fast with proper leverage,” defensive coordinator Gus Bradley said. “We don’t want missed tackles, but if they show up with the right leverage, it’s more of that mindset with him that we have to play fast with them and try to eat up the grass.”

The kickers. Baltimore’s Justin Tucker missed only four field goal tries this season — two were blocked — and ranks first in NFL history with a 90.1 career average.

Los Angeles rookie Michael Badgley has provided stability, hitting 15 of 16 field goals. The Chargers have had seven kickers the past two seasons.