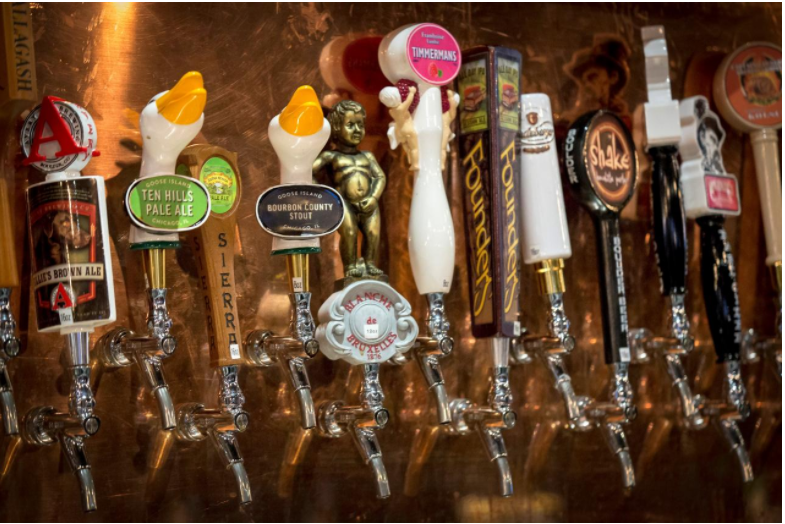 Goose Island beer taps are seen amongst other craft beers at a bar in New York January 21, 2015. Photo: REUTERS/Brendan McDermid

Makers of craft beer, artisanal spirits, hard cider and mead may lift their glasses a bit higher next year as the result of a little noticed provision in the sweeping tax overhaul the US Congress passed this week.

Tucked away in Part IX, sections 13801 through 13808, are sharply lowered excise taxes on a liquor cabinet full of alcoholic beverages made by small producers.

One provision also set up the first statutory definition of mead, an alcoholic beverage made of fermented honey, probably more familiar to scholars of the Dark Ages epic poem “Beowulf” than most American imbibers.

Small craft producers are a rapidly growing category of the alcoholic beverage industry in the United States and the industry is gaining political clout. Sales of craft beer alone were $4.8 billion in the 12 months ended in January, according to data from Nielsen Holdings.

“I’ve been working on the issue since 1993,” said Arthur DeCelle, a McDermott Will & Emery lobbyist working for the brewing industry. “I never thought it was going to happen.”

The 3,658 words were originally part of a bill introduced in January by Senator Ron Wyden, an Oregon Democrat, and 53 other Senators and 303 House members titled “The Craft Beverage Modernization and Tax Reform Act.”

For tax purposes, it defines alcoholic ciders as wine and widens the flavors that cideries can use.

The lowered tax gives the small producers a little more profit that can help them expand, experiment, market or even lower prices. For example, for hard ciders made with any kind of fruit besides apple or pear, the new law substantially lowers the tax to 7 cents a gallon from $1 for small producers. Cider had been taxed depending on what kind of fruit was used.

For a 12-ounce can of cider, the tax falls to less than a penny per can compared with about 10 cents a can.

Small wine producers also get a tax break as did makers of sparkling wines.

Small producers of distilled spirits, like gin, vodka or bourbon, will pay $2.70 a gallon in tax on the first 100,000 gallons made compared with $13.34 a gallon levied above that level.

Craft beermakers will pay tax of only $3.50 a barrel on the first 60,000 barrels brewed. Big producers of more than 6 million barrels will pay $18 a barrel, the current level for beer. A beer barrel is set at 31 gallons (117 liters).

Craft beer sales grew about 6.2 percent in 2016 while overall beer sales were flat. It makes up about 12.3 percent of the beer market. There are more than 6,000 craft breweries and brew pubs, according to the Brewers Association.

Bob Pease, chief executive officer of the association, said the beer excise tax is a relic of the Civil War, when the federal government looked for additional ways to raise money. It is an extra tax alcoholic beverage makers pay, in addition to income taxes. He has been trying for 10 years to reduce it for small makers. “This is historic,” he said.

He expects it will help to expand the business of small makers--and employment. “Not many industries are bringing back manufacturing to Main Street like small independent craft breweries,” he said.

He did not expect it will result in lower prices. “We’re not looking for cheaper beer.”