More than 250,000 people visited Gucun Park in north Shanghai over the first weekend for the city's annual cherry blossom festival. 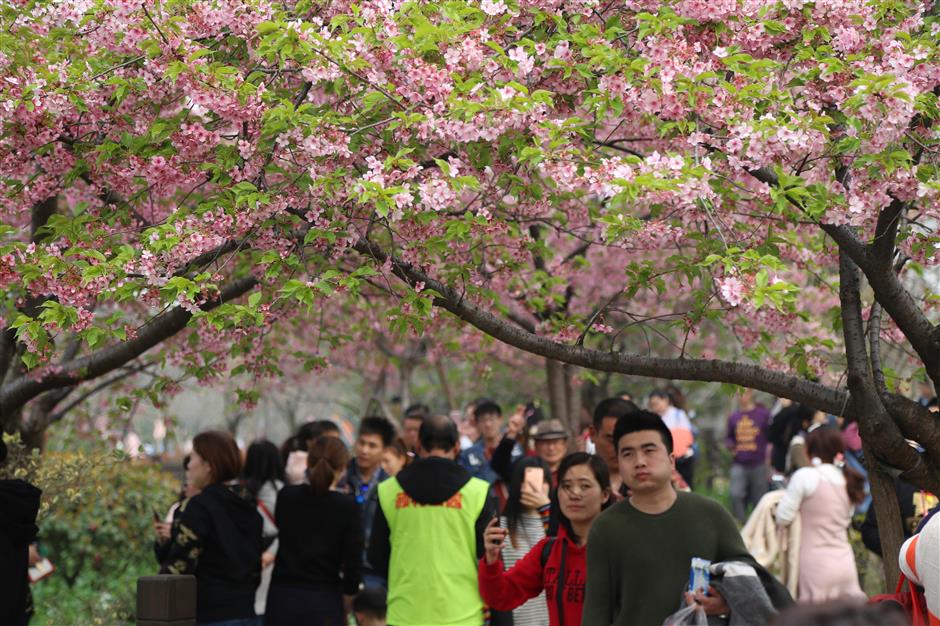 Some 138,000 visitors flocked to the park in Baoshan District on the second day of the monthlong festival on Saturday, more than double the same period last year, according to the district government.

Another 120,000 people visited the park on Sunday.

The park, said to be the largest in Asia, also features the largest group of cherry blossom trees in the city.

Its more than 12,000 cherry trees, made up of 90 species, have started blooming a week earlier than usual due to the warm winter.

Most visitors came between noon and 2pm over the weekend when some 20,000 people on average entered the park per hour, according to the park. The park operator suggested people stage their visits.

"Though many early cherry flowers have bloomed, the largest cherry blossom is expected in early April this year," said Zhang Zhong, general manager of the park.

Traffic congestion has been heavy.

The parking lot, with more than 500 spaces, was fully occupied by 9am on Saturday.

After 10am, a long line of vehicles stretching for about 2 kilometers moved slowly along the road, which is a major thoroughfare connecting the park and downtown areas.

The district government has dispatched more than 1,400 security guards in and around the park to ensure safety over the weekend.

The Gucun Park Station on Metro Line 7 was also busy.

Security guards and volunteers, triple the normal number, maintained order and guided visitors during the peak hours between 10am and 5pm, said Zhu Minhao, director of the station.

More trains are being laid on, Zhu said. 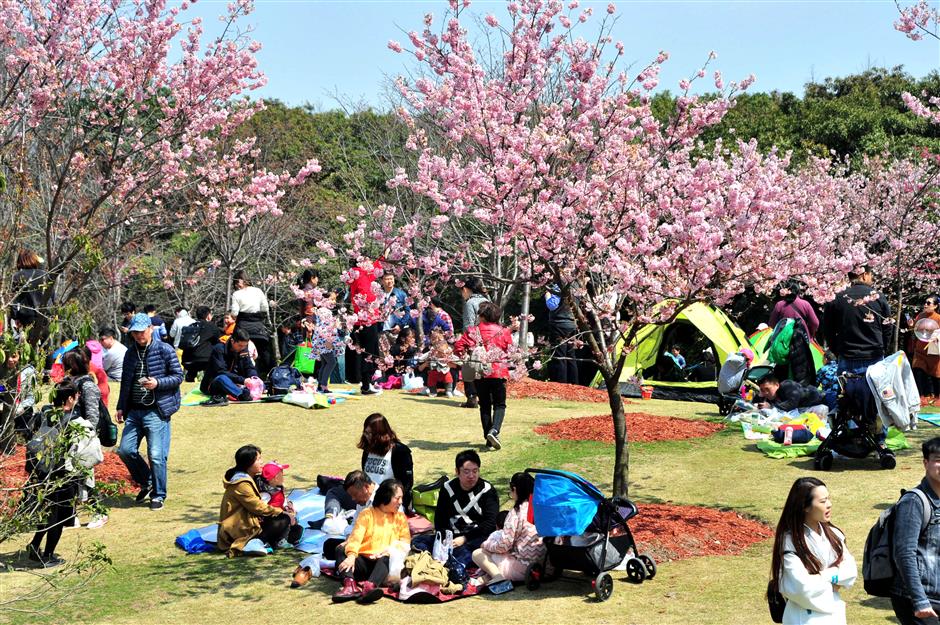 This year, measures have been put in place in case visitors to the park exceed its maximum capacity of 200,000.

These include 10 shuttle buses being placed on standby to transport visitors to the nearby stations of Metro lines 1, 3 and 7. Authorities have also allocated extra parking spaces so that more than 5,800 cars can park.

More cherry species have been planted this year, which bloom at different times, to allow visitors to enjoy blossom throughout the festival, said Zhang.

One of the main attractions is the Suburban Forest Zone that has nearly 4,000 pink, yellow and green blossom trees covering 130,000 square meters. These are expected to fully bloom in late March.

Magnolia, redbud and crabapple trees also flower over the weekend, adding to the park's spring feeling.

There are also photography and poetry competitions, as well as a matchmaking event and a poll to select the most beautiful trees.

Other activities, such as traditional Chinese opera, fashion shows and martial arts performances, are held in the park every weekend during the festival.

Visitors are invited to try making local pastry named tianhua tulu (sky flower and jade dewdrop). The process of making it has been revived by masters in Baoshan District.

The admission to the park is 20 yuan (US$3). Seniors, the physically challenged, students and military personnel can enjoy discounted prices or free admission.

Visitors can check the real-time visitors' number to the park through the city government's public WeChat accounts: “shanghaifabu.”