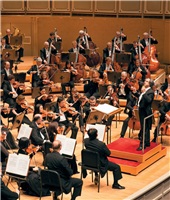 Now celebrating its 125th season, the Chicago Symphony Orchestra is consistently hailed as one of the world's leading orchestras. In September 2010, renowned Italian conductor Riccardo Muti became its tenth music director. His vision for the Orchestra—to deepen its engagement with the Chicago community, to nurture its legacy while supporting a new generation of musicians, and to collaborate with visionary artists—signals a new era for the institution.

The Chicago Symphony Orchestra's distinguished history began in 1889, when Theodore Thomas, then the leading conductor in America and a recognized music pioneer, was invited by Chicago businessman Charles Norman Fay to establish a symphony orchestra here. Thomas's aim to establish a permanent orchestra with performance capabilities of the highest quality was realized at the first concerts in October 1891. Thomas served as music director until his death in 1905—just three weeks after the dedication of Orchestra Hall, the Orchestra's permanent home designed by Daniel Burnham.