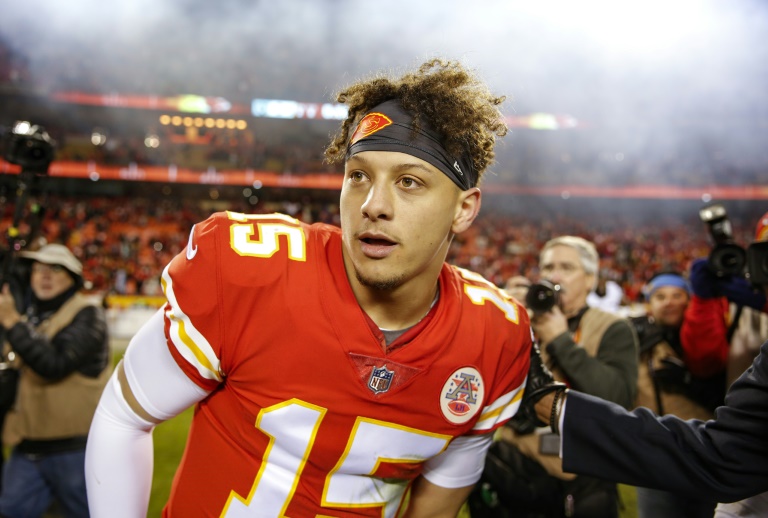 Kansas City Chiefs quarterback Patrick Mahomes threw his 50th touchdown of the season in a 35-3 NFL win over the Oakland Raiders (Photo: AFP)

The Kansas City Chiefs cruised past the Oakland Raiders 35-3 on another milestone day for quarterback Patrick Mahomes, locking up the American Conference top seed on the final day of the NFL regular season on Sunday.

Mahomes threw for 281 yards and two touchdowns before exiting in the fourth quarter. His 89-yard TD bomb to Demarcus Robinson gave him 50 touchdown passes and 5,097 yards for the season.

He joined Peyton Manning as the only quarterbacks to throw for 50 TDs and more than 5,000 yards in a single season, Manning accomplishing the feat back in 2013.

In addition to a first-round bye, the top seeding gives the Chiefs home field advantage throughout the AFC playoffs.

Perennial AFC contenders New England settled for the second seed -- with a first-round bye and a playoff opener at home -- after a 38-3 rout of the New York Jets.

New England's superstar quarterback Tom Brady threw three of his four touchdown passes in the first half as the Patriots finished the season unbeaten at home.

"We had a great opportunity for it," Brady said of grabbing the bye. "I'm just glad we could close it out. You hate to have that opportunity and not handle what we needed to handle."

Brady said it was satisfying to close out the regular season with back-to-back victories after two straight defeats.

"We showed some resiliency," he said. "We're going to need that going forward."

The Baltimore Ravens expunged the memory of last season's week 17 heartbreak as they held on for a 26-24 victory over the Cleveland Browns to grab a playoff berth.

The Ravens, who missed the post-season last year when the Bengals scored late, led 20-7 in the first half. But the Browns pulled within 26-24 on Baker Mayfield's third touchdown pass of the day with 3:24 remaining.

That saw Mayfield break the NFL rookie record with his 27th TD pass of the season. After the Browns defense thwarted a Baltimore drive Mayfield had another chance, but his fourth-down pass was intercepted by Ravens linebacker C.J. Mosley for a victory that gave Baltimore the NFC North division title.

The win extinguished Pittsburgh's hopes of capturing the division.

The Steelers did what they could with a 16-13 victory over Cincinnati. Steelers players then remained on the field to watch the closing minutes of the Ravens game on the giant scoreboard.

The final AFC berth went to the Indianapolis Colts. Andrew Luck threw for three touchdowns in a 33-17 victory over the Tennessee Titans as the battle for the final berth came down to the final game of the day.

Reigning Super Bowl champions Philadelphia squeaked into the playoffs, crushing the Washington Redskins 24-0 and then gaining the final NFC wild card berth when the Chicago Bears defeated the Minnesota Vikings 24-10.

"We got some help today. It's really special," said Eagles quarterback Nick Foles. "We get to keep playing. We get to wear the Eagles jersey one more time."

The Eagles got a scare when Foles exited after a sack early in the fourth quarter. He said he hoped sore ribs wouldn't keep him out of the playoff opener.

Elsewhere the Houston Texans finally clinched the AFC South division title that had long seemed theirs for the taking with a 20-3 win over the Jacksonville Jaguars.

Deshaun Watson threw for 234 yards and ran for a touchdown and DeAndre Hopkins had 147 receiving yards for the Texans, who roared back from an 0-3 start to the season with a nine-game winning streak but had lost two of their last three.

The playoff-bound Dallas Cowboys will take some momentum into the post-season after capturing a 36-35 victory over the New York Giants thanks to a two-point conversion in the final minute.