Child band hits high notes with instruments made from garbage 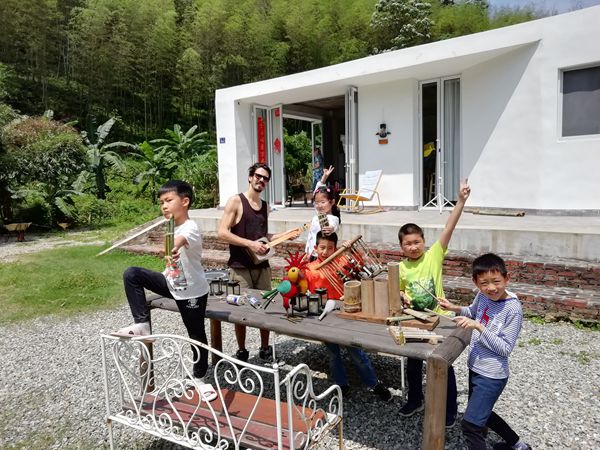 Some team members of the Recycle Band play with instruments they made out of trash with the help of their music teacher, Nemanja Radovanovic. (Photo: China Daily)

Their music is not rubbish, but their instruments are. Ten primary school pupils are striking a chord with their talent and ingenuity. In a group appropriately named Recycle Band, they make melodies from discarded garbage. Based in Xiamen of East China's Fujian province, the band is establishing a name for itself and has been invited to perform at a major national event: the Midi Kids Band Competition-for children from 6 to 17 years old-to be held in September and October in Beijing this year.

The annual event is organized by Beijing Midi School of Music, one of the first contemporary music schools in China.

The young members of the Recycle Band have known each other since kindergarten while living with their families in the faculty dormitory of Xiamen University.

And now for the rubbish that gave the band its beat. Back in 2017, a corner of the lawn near the dormitory building was piled high with trash-paper, cardboard, plastic and other junk that had been discarded by families redecorating their homes.

Gao Ye, a student of contemporary art at the university, along with Chen Yixin noticed the mess and decided to decorate the lawn with items made from the garbage.

The triangular lawn, less than five square meters, soon became a popular spot for the children living on campus. College students too appreciated it. It became a favored spot to socialize and soon films were being screened there and other activities were held.

Gao, who is good with his hands, turned some of the garbage into musical instruments and showed the inquisitive children how to make percussion instruments out of bottles and boxes.

"These kids were so happy that they could help make these instruments, and they began to hit them with little sticks, so we thought why not form a band," recalls Chen.

"The children are all neighbors and friends, and they love to play music together," says Chen, whose grandfather was a teacher at the university and he himself runs a local hostel.

The children were then divided into three groups based on the sound they made from the "musical instruments". This in turn attracted more attention and soon music majors from the college, including a violin player, lent their expertise. The children simply loved playing music together, as Chen observed. 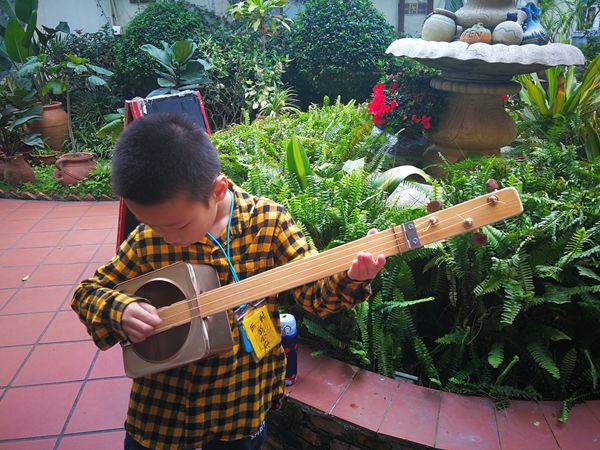 Chen Muyuan, 8, is obsessed with making music with the cakebox-turned guitar.(Photo: China Daily)

"My son learned to play drums but traditional music education is usually boring for kids," he says. "This is different. Making instruments themselves and playing music with friends excited them."

In January 2018, the band gave a debut show at the university and then the kids performed in Gulangyu Island, a popular Xiamen tourist site, earlier this year.

Team member Muyuan says: "I like the rhythm of the percussions."

Jiang Donglin is another band veteran, not bad for an 8-year-old. He joined the band at the outset and quickly learned how to make music from a plastic bottle, cork and cardboard.

"I glued different parts of the instrument together and each part sounds differently when I strike," he says with justifiable pride.

When the band plays together, the youngsters seem both excited and poised, and a confident foot-tapping rhythm emerges.

"We learned from our teachers that it's important to listen to the sounds made by others when we play together," he says.

Parents are their children's unconditional supporters, not least his mother.

"Improvisation is taught when the kids play in the band. It's a great way to display themselves and discover their musical potential," says Donglin's mother, Qin Jingjing, a teacher at the local Confucius Institute.

She and her husband, also a teacher at Xiamen University, witnessed their son's growth after joining the band.

"The kids are not afraid of being on stage any longer," Qin says with a smile. "We are glad to find that they have become more confident about themselves."

Chen thought it a pity after the band's initiator Gao Ye graduated from Xiamen University this summer. "It was him who kept on encouraging children to learn music and make instruments from garbage," says Chen, who later invited his friend from Serbia, Nemanja Radovanovic, to join in the band as music teacher.

Radovanovic, 33, who's a graphic designer specializing in illustration, animation and clothing design, works as a freelance artist. He had experience in coordinating art workshops for children, and he's also "a big supporter of recycling", so he took the job.

"We make new instruments 'from nothing' and use different things to make sounds. The kids saw that it is possible to make music without real instruments by just using imagination," says Radovanovic, who played clarinet and bass guitar since young.

Once he found an empty cake box and made a guitar. The kids were amazed. Together they also made flutes, drums and xylophones out of discarded bamboo.