Scientists have observed wild chimpanzees tucking into an unusual snack: tortoises, whose hard shells they crack against tree trunks before scooping out the meat. 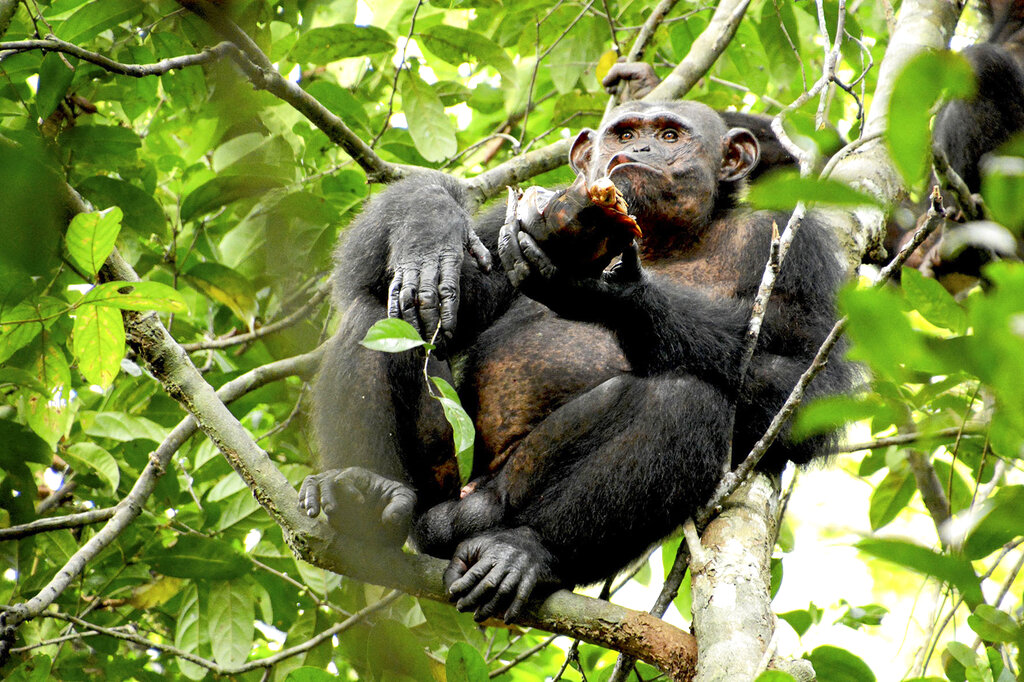 In this photo provided by the Max Planck Institute a wild chimpanzee eats a tortoise, whose hard shell was cracked against tree trunks before scooping out the meat at the Loango National Park on the Atlantic coast of Gabon, May 20, 2019. (Photo: AP)

In a paper published Thursday by the journal Scientific Reports, researchers from Germany say the behavior they spotted dozens of times in a group of chimpanzees at Loango National Park in Gabon bolsters the notion that humankind's distant cousins develop their own distinct cultures.

Tobias Deschner, one of the authors of the paper, said that while chimpanzees and tortoises coexist elsewhere — and other primates such as baboons and mandrills are known to feed on young, soft tortoises — scientists have never before spotted any that crack open and eat the reptiles.

One explanation could be that the Loango park region also has abundant hard-shelled fruit, like that from the strychnos tree, that also needs to be whacked against trees to open, prompting some enterprising chimpanzees to try the same on passing tortoises, he said.

"They see this is a hard-shelled object with some interesting thing inside and I need to crack it open," said Deschner, a primate researcher at the Max Planck Institute for Evolutionary Anthropology in Leipzig. "If I can do that with the fruit and have the same problem with a hard-shelled animal with something inside that I want to get access to, then I can say 'OK, why not do it in exactly the same way?'"

Some scientists dispute the idea that chimpanzees are capable of this kind of mental leap, much less of passing the trick on to others in such a way that it becomes an established 'cultural practice' among the whole population.

But Deschner and colleagues from the University of Osnabrueck said their observations in Loango suggest that's what happened.

"They all use exactly the same way of doing it," he said. "This suggests to me that they really look at how others are doing it and then copy the movements."

Other researchers agreed. "This fits into previous observations that are interpreted as traditional behavior, which some have broadly described as culture," said Dietmar Zinner, a zoologist at the German Primate Center in Goettingen who wasn't involved in the study.

The authors also noted that weaker chimpanzees often pass their tortoises to stronger adults who are able to break them open and then share the meal among the whole group.

In one case, a male was even spotted eating half a tortoise, then tucking the shell it into a tree fork and coming back the next day to finish the leftovers, suggesting chimpanzees are capable of planning ahead, the authors said.

Deschner said such acquired practices may be lost if particularly groups of chimpanzees are wiped out, even if the area they inhabited is repopulated again later.

"We see chimpanzees disappearing all over Africa due to habitat destruction and poaching," he said. "What disappears there is not only sheer numbers but with each population that goes there is a unique culture that is lost."