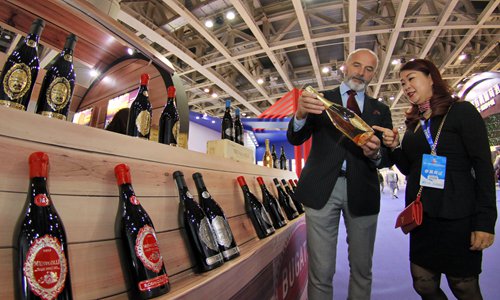 A Chinese visitor checks out an imported wine at an exhibition in Yantai, East China's Shandong Province. (Photo: IC)

If he could travel back in time, Yuan Shichao would go back to 2011 to thank himself for his "crazy" decision.At that time, he was applying for the wine business program at the University of Adelaide in South Australia. When he was denied admission, he went directly to knock on the dean's door."I struggled to use all the English words I knew about wine," Yuan, 30, recalled. "The dean was, I think, more surprised than persuaded, but he agreed to let me try," he said.It was the start of Yuan's career in the wine industry. Now he is marketing officer with Nova Vita, a wine group in Adelaide Hills, South Australia.In recent years, he has seen a boost in the wine trade between China and Australia.According to Wine Australia, Australian wine producers exported 2.82 billion Australian dollars' worth of product to the world (about $2 billion) last year, of which 40 percent was sold to China, an increase of 18 percent from the previous year.Wine, which ordinary Chinese three decades ago were more likely to have seen in movies than on their dinner tables, was once seen as a symbol of a petty bourgeois lifestyle.After China's reform and opening up, people's living standards improved, and the country's middle class grew. With the increase in international exchanges, wine became an ordinary companion for everyday dishes in many families.Perfect timingYuan went to Adelaide in 2010 to visit his father's friend. While there, he was struck by the region's vineyards and inspired to enter the wine business.After graduation from the University of Adelaide's wine business major, he found a job at Nova Vita just as the wine company was about to enter the Chinese market. "In Australia, the demand for wine was not as high as the supply. Therefore, more than half of the products would be exported. As a Chinese person, I joined the company at the right time," he said.Nova Vita was founded in 1999. Now the company boasts more than 66 hectares of vineyards and can produce two million bottles of wine annually."In recent years, our sales growth rate has been about 80 percent," Yuan said."During my first visit, most of the inquiries were about entry-level wine—what I call everyday drinking wine, about 3 Australian dollars a bottle," Mark Kozned, managing director of Nova Vita, said. "Now most of the inquiries about wine are mid-level, something you can have at home with dinner or with good friends, or for premium wine, which people tend to use for gift-giving especially around Mid-Autumn festival or the Chinese New Year," Kozned said.Growing tiesKozned has visited China more than 25 times since 2012, with the most recent visit during the China International Import Expo (CIIE) last year."CIIE last year was a fantastic event. It was well put on, both by the Chinese government and the organizer," he told Xinhua. "I was impressed that the Chinese business people from around China that visited really wanted to do some business," he added."Our achievement from the CIIE was that we gained three to four potential clients, and during the event we actually signed contracts. We discussed with three other parties post-CIIE to send the wine in the next three to four months," he said.Since participating in the CIIE, Nova Vita has received orders to China for more than a dozen containers of wine.According to the Australian Trade and Investment Commission, China is the world's third-largest market for imported wine behind the US and Germany.The China-Australia Free Trade Agreement further reduced the tariff on Australian wine to China to zero. "It made Australian wine in the Chinese market more and more competitive. We are closing on France as the number one wine supplier in volume into the Chinese market," Kozned said.Australia has also attached great importance to the Chinese market. Last year, more than 100 companies promoted Australian wine in China as part of local industry body Wine Australia.Australian wine has reached not only metropolises like Beijing and Shanghai, but also smaller Chinese cities.Currently, Nova Vita has two branches in China, one in east China's Zhejiang Province and another in Southwest China's Chongqing Municipality. Yuan, whose hometown is in Zhejiang, spends several months each year in China doing business."More Chinese people have joined Australian wine companies," Yuan said. "I graduated in 2013, when I was the only one of more than 10 Chinese students to land a full-time job. Now the Chinese students majoring in the wine business haven't graduated yet, but most of them have already received job offers," he said.More than just a jobThe bond between China and Australian wine is so close that Chinese people are no longer satisfied with just becoming employees at wine companies.Guo Song arrived in Australia in 2007. Two years later, he bought the Jarressa Estate with friends.In retrospect, he said that in the past three years, sales of wine in the Chinese market have grown at a rate of about 50 percent. In 2018, Jarressa sold more than 10 million bottles, 96 percent of which were sold to China.He said that China is affecting the wine industry in Australia. "Chinese people prefer red wine to white, and the preference has affected grape cultivation here," he said.With China's development and further opening up, Guo sees lots of potential for the wine industry.Kozned believes that wine is an important bridge between China and Australia. He has decided to attend the second CIIE this year. "We will spend more time in preparation, and put on a better presentation," he said. "The second time, you will always do things better," he added.Australia will hold a federal election in May. However, Kozned said that no matter who wins, and however the international trade environment changes, the wine trade between China and Australia will continue to boom. "We are like two brothers, China and Australia," he said.