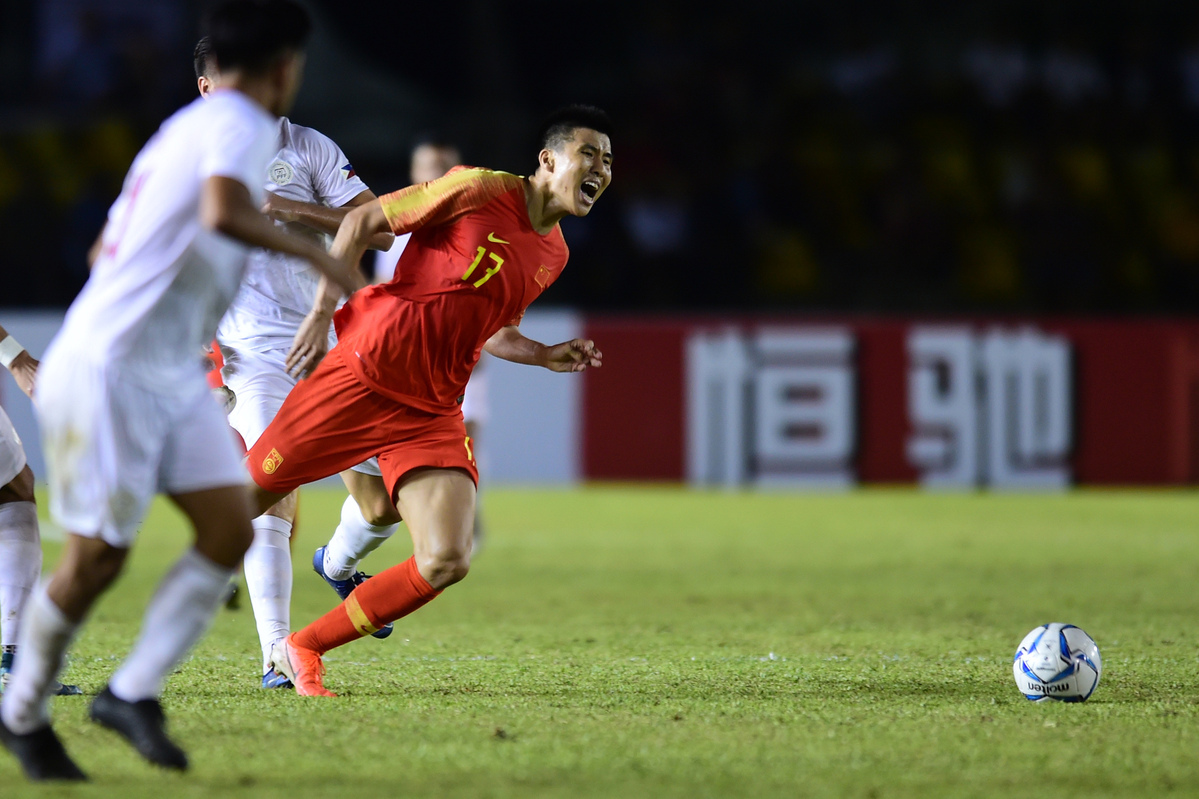 The renewed sense of optimism surrounding Team China will face its sternest test yet in Thursday's 2022 World Cup qualifier against Syria in Dubai.

Boosted by the addition of naturalized players Ai Kesen and Li Ke, Marcello Lippi's side got its campaign off to a flying start with 5-0 and 7-0 drubbings of the Maldives and Guam respectively.

Last month, however, a 0-0 draw against the Philippines provided something of a reality check and placed extra pressure on Lippi's men to earn at least a point against Group A leader Syria.

With Syria perfect so far in qualifying, victory in Dubai would be a major boost to second-place China's chances of securing a spot in the 12-team second round of Asian zone qualifying, comprised of the eight group winners and the four best second-place finishers.

After initially assembling in Guangzhou, the Chinese squad departed for Dubai last Wednesday and is now training in nearby Sharjah.

The players are no strangers to the United Arab Emirates, which hosted this year's AFC Asian Cup earlier this year. However, Beijing Youth Daily reported that the hot weather and jet lag appeared to have taken a toll on Lippi's players as they struggled through a highintensity session last Thursday.

The newspaper reported that Lippi has been emphasizing the notion that every single member of his squad has a chance to face Syria and no one is automatically assured of a starting berth.

On Sunday, a largely second-string China XI beat a local Sharjah team 6-1 in a behind-closed-doors friendly.

The lack of a clean sheet left some fans on social media expressing concern that China's defense may not be resilient enough to keep out Thursday's opponent, which only narrowly failed to qualify for the 2018 World Cup after being beaten in a two-legged playoff by Australia.

Defender Li Lei, however, reported that the preparations for the Syria game are going well.

"The first two days in the city we were trained really hard," said Li. "The facilities and training conditions here are really good. And the players were excited when they stepped onto such a good pitch.

"It's vital that we reach the 12-team second round, but we shouldn't burden ourselves too much. All we need to do is to perform as we've trained, and then we will have a good result.

"We have been preparing and devising specific tactics based on the rival's characteristics. Led by the head coach, we will try to win the match. Ever since we reassembled, the head coach has been emphasizing the intensity of the match.

"We have to put pressure on them, instead of waiting for their pressure. Through the training and the matches we've played, we have a better understanding of what the coach is asking of us. We have to play strictly according to his directions - playing faster and at a quicker pace."

Having begun his Team China career with three goals in his first two games, Ai Kesen's lackluster showing against the Philippines, which was attributed to tiredness, was a concern for fans.

Ai Kesen's Evergrande has faltered of late as it tries to seal a record-extending eighth Chinese Super League title, with the club's head coach Fabio Cannavaro temporarily relieved of his duties and then quickly reinstated in somewhat farcical fashion. The uncertainty at Evergrande has added to concerns that Ai Kesen is neither in peak condition nor the best frame of mind for the Syria clash.

"What we should do now is cooperate with the coach and train hard according to his directions," said the forward before setting off for Dubai.

"We have to be fully prepared for the match after all Syria is our strongest rival in Group A. We need to produce a great performance and hope we can win the game."

Wu's club situation in Spain is also not ideal. The former Shanghai SIPG star set off for Dubai following Espanyol's 3-1 defeat at Atletico Madrid on Sunday night - a loss which leaves the Barcelona-based side second-from-bottom in La Liga.

Apart from a solitary goal in a Europa League group game at CSKA Moscow, it has been a tough second season for Wu at Espanyol, which fired coach David Gallego last month and replaced with his former Sevilla boss Pablo Machin.

Having been in and out of the starting XI this season, Wu saw 59 minutes of action against Atletico before being benched immediately after the host had made it 2-1.