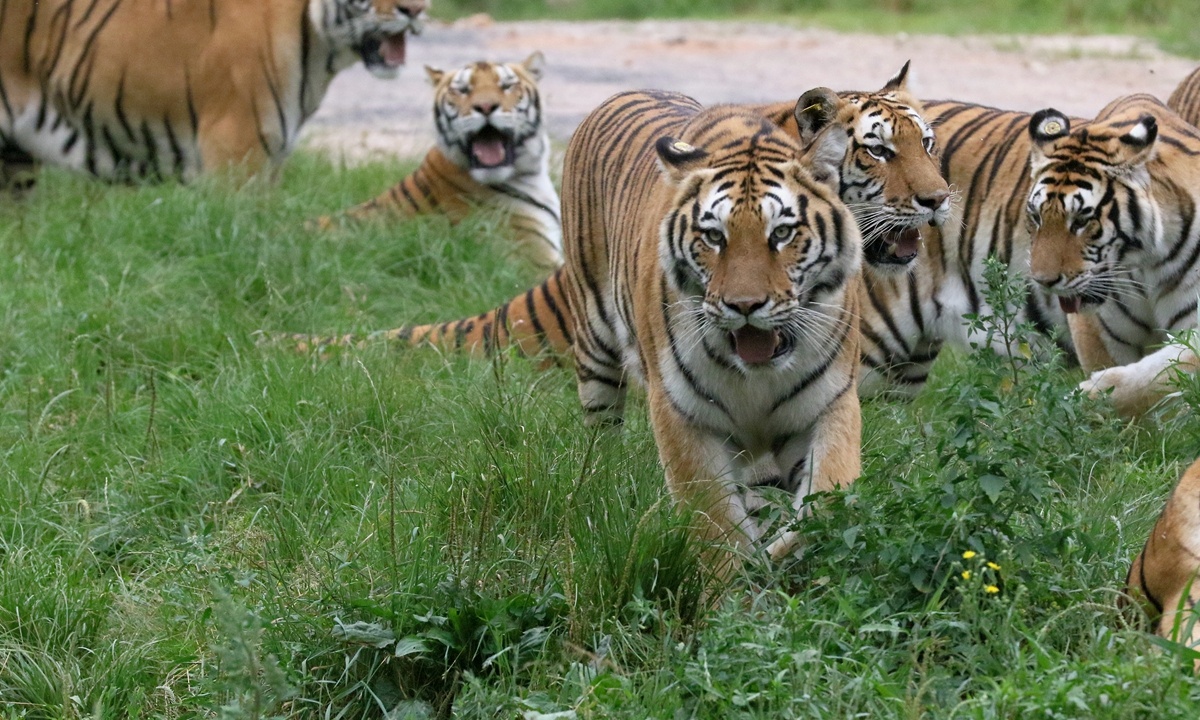 Siberian tigers, also known as Amur tigers, are one of the world's most endangered species. Currently there are fewer than 500 remaining, with a majority of the population living in the wilds of Russia. As to the population living in China, through the conservation efforts of the Chinese government and some international organizations, their number was able to increase to less than 30 during the 13th Five-Year Plan(2016-20).

China's conservation efforts to protect wild Siberian tigers have greatly benefited the restoration of the species' global population and expansion of its habitat.

The Siberian tiger is a Panthera tigris tigris subspecies that mainly lives in Russia's far eastern regions and Northeast China. As the largest predatory cat species, a male tiger's body can reach about two meters in length with an additional tail length of about one meter. The average weight of an adult male tiger is 250 kilograms, and some can reach a hefty 350 kilograms.

The color of wild Siberian tigers range from brown in summer and light yellow in winter. Their backs and sides bear many rows of narrow black stripes, while their heads are large and round with several black horizontal stripes on their foreheads. These forehead stripes often come together in the middle, causing them to appear very similar to the Chinese character wang, which translates to "king" in English, which is why the Siberian tiger has the nickname "King of the forest" in China.

Siberian tigers usually live in regions with thick forests, shrubbery and wild grasslands, and can range more than 100 square kilometers in search of food. They mainly prey on large and medium-sized mammals such as deer, sheep and wild boar, as well as small mammals and birds. This is usually accomplished through a sneak attack.

Due to the destruction of their habitat and poaching, their number has dropped significantly. In 2010, the Siberian tiger was listed as an endangered species by the International Union for Conservation of Nature.

Through increased protection efforts, including the introduction of a logging ban and the establishment of some national parks, the number of tigers in China has rebounded and is showing a slow upward trend.

According to the World Wildlife Fund (WWF), the annual growth rate of the wild tiger population is about 1.04 percent, while the animals are spreading to China's inland areas at a rate of 13.8 kilometers every three years. Additionally, the number of animal snares set by hunters has decreased significantly, leading to an increase in the tiger's natural prey.

Jiang Guangshun, executive deputy director of the feline research center at China's National Forestry and Grassland Administration, told the Global Times that cooperation between China and Russia has been one of the most significant steps contributing to the animals' protection.

In June 2019, China and Russia signed a comprehensive strategic partnership that stated the two countries will deepen cooperation and protection of endangered wild animals including Siberian tigers and leopards and their natural habitats, and jointly monitor the endangered animals to ensure that those in Northeast China can freely migrate across the Sino-Russian border.

Liu Peiqi, program director of the WWF Beijing Office, also told the Global Times that the Northeast China Tiger and Leopard National Park Administration and Russia's Land of the Leopard National Park signed a three-year work plan for tiger conservation in 2019, which was an important step in trans-boundary cooperation for both countries.

Another effective measure is the use of some advanced technology including artificial intelligence (AI), infrared cameras and big data to more accurately maintain a database of Siberian tigers.

To get real-time data, researchers cooperated with tech firms to develop intelligent infrared cameras and set up networks in the wild. The infrared cameras detect the tigers, and then AI programs determine their species and judge their weight and height, all of which is then stored in the database, according to Jiang.

Looking to the future

Although technology has helped improve protection efforts, Jiang noted that current technology is still in its infancy and has a lot of potential to be explored.

For example, he noted that the accuracy of species identification and population density measurements needs to be further improved.

In 2018, WWF and Heilongjiang Academy of Sciences surveyed an area of 74,000 square kilometers in Lesser Hinggan Mountains in Northeast China's Heilongjiang Province. The survey determined that 42 percent of the land could provide potential suitable  habitats for the Siberian tiger and so were ideal locations for ecological corridors.

According to Jiang, the establishment of ecological corridors in Northeast China will begin in 2021, while the Siberian Tiger and Leopard National Park is scheduled to be completed before the end of 2020.

"The park is being built in accordance with the ecological needs of the Siberian tiger. It will reduce the chance of human disturbance, and can also be a good scientific research base," said Jiang.