China Festival kicks off in Japan 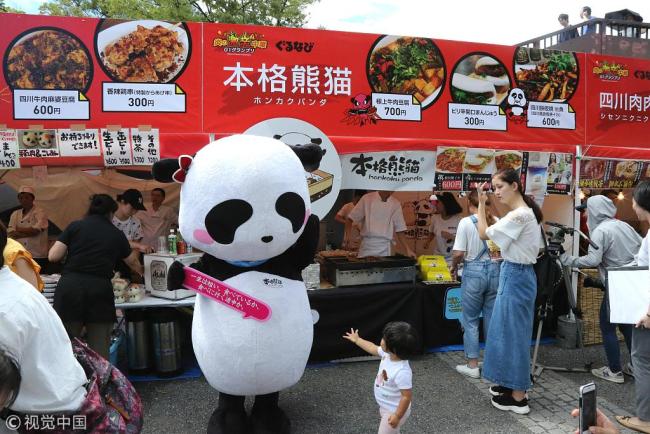 The 2018 China Festival, a fair that presents Chinese cuisine, specialties, culture and entertainment to the Japanese people in an effort to promote bilateral friendship, kicked off Saturday in downtown Tokyo.

The two-day festival was also held to mark the 40th anniversary of the signing of the China-Japan Treaty of Peace and Friendship, according to the organizer.

The festival kicked off at 10:00 a.m. local time in Yoyogi Park in downtown Tokyo, where a spectacular stage and some 100 booths selling Chinese cuisine and specialties had been set up.

A number of Chinese and Japanese artists gave shows on the stage, including the Huangmei opera, a traditional rural folksong and dance that had been popular in China.

Meanwhile, people lined up in front of the various booths to have a taste of the traditional Chinese cuisine, including Sichuan cuisine, dumplings, Taiwan milk tea and others.

"While Chinese cuisine is very popular in Japan, we rarely had the chance to watch such traditional Chinese opera. I hope we can have more of such chances in the future," said Matsuno, a Japanese visitor to the festival.

Cheng Yonghua, the Chinese ambassador to Japan, said that the festival, while presenting Chinese culture to the Japanese people, serves as a bridge for the peoples of the two countries to enhance mutual understanding and friendship.

As this year marks the 40th anniversary of the signing of the China-Japan Treaty of Peace and Friendship and the bilateral relations are facing new opportunities for development, it is hoped that the festival will play a positive role for the long-term and healthy development of China-Japan ties, Cheng said.

Yasuo Fukuda, former Japanese Prime Minister and chief advisor of the executive committee of the festival, said that friendship between the peoples of China and Japan is a foundation for bilateral relationship, and he hopes the festival could help the two peoples to enhance communication and mutual understanding.

He also encouraged the Japanese people to visit China when they have the chance and to see with their eyes the fast development of China.

The festival was hosted by the Chinese Embassy in Japan and the executive committee of the 2018 China Festival, and cosponsored by a number of groups and institutions from both China and Japan.