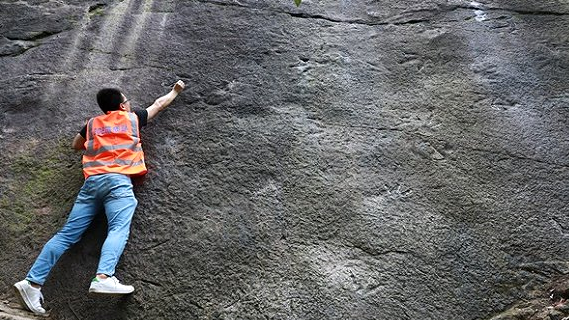 A rock climber found some unusual footprints at Geleshan National Forest Park, Chongqing last March. After research by paleontologists and other experts, Chongqing Planning and Natural Resources Bureau (CPNRB) announced on Monday that the "footprints" belong to Kayentapus from the Early Jurassic.

What is "Kayentapus?" It represents relatively large (footprint length about 14 inches, 35 cm) tridactyl tracks of a bipedal theropod originally described by S. Welles in 1971.

Based on the measured relative stride length, it is speculated that the footprints were made by large and medium-sized theropod dinosaurs, who were doing a trotting gait at that time.

This latest finding was published on a Science Citation Index (SCI) journal Historical Biology, and named "The Early Jurassic Kayentapus Dominated Tracks from Chongqing, China." Dr. Xing Lida, an associate professor at the China University of Geosciences, Dai Hui, senior engineer of Chongqing 208 Academy for Geological Heritage Protection and other scholars participated in the study.

"Although the footprints of Kayentapus are widely distributed globally, they had not been found in Asia," said Dai Hui, adding that the footprints in Chongqing were proven to be Kayentapus hopii, and they're well-preserved.

Dai indicated the importance of discovering Kayentapus. "China provides some of the best-preserved examples of this ichnogenus in Asia and shows that it can be consistently distinguished from robust Eubrontes. The assemblage is further evidence that the dinosaur track sites of the Lower Jurassic were theropod-dominated in Asia and globally with a consistent diversity of track morphotypes," said the article in Historical Biology.