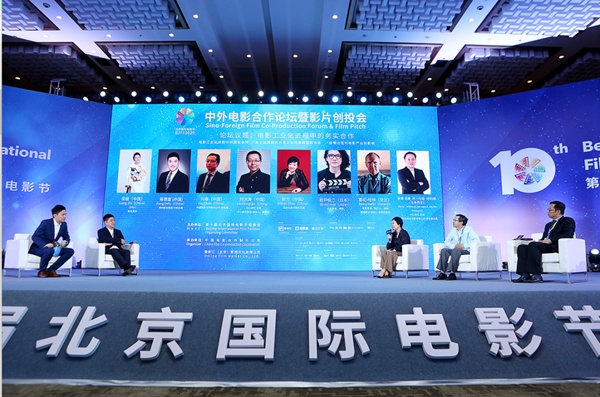 Executives discuss the future for co-productions at the Sino-Foreign Film Co-Production Forum & Film Pitch themed "Persistence and Change in International Film Cooperation against Backdrop of the Pandemic" held in Beijing on Aug. 24, 2020, during the 10th Beijing International Film Festival. (Photo courtesy of BJIFF)

China Film Co-production Corporation announced at the annual Beijing International Film Festival (BJIFF) that the number of co-productions with companies outside the Chinese mainland has exceeded 1,100 since 1979.

The total number of film co-productions from 1979 to 2019 was 1,127, most of which were co-productions with Hong Kong, Macao and Taiwan. Only 266 co-productions were made with companies based in foreign countries and regions in the past four decades.

Before 2000, the number of co-productions was very few. But from 2000 to the end of 2019, 244 Sino-foreign co-productions were completed and released, and there were 49 co-productions with a box office gross of over 100 million yuan in the Chinese mainland.

Liu Chun, general manager of China Film Co-production Corporation, revealed that since the beginning of 2020, 39 co-productions have been established, most with Hong Kong film companies. The number is relatively lower than the past few years due to this year's COVID-19 pandemic.

According to Liu, China has co-production agreements with 22 countries, including the United Kingdom, France, Russia, New Zealand, Japan, and India.

Liu felt that Chinese films are at the stage where self-change and self-improvement are required to deepen Sino-foreign cooperation. "Every domestic filmmaker needs to develop this concept," he said at the Sino-Foreign Film Co-Production Forum & Film Pitch themed "Persistence and Change in International Film Cooperation against Backdrop of the Pandemic" held on Aug. 24 during the ongoing 10th BJIFF.

When touching upon specific methods, Warner Bros. China President Gillian Zhao noted that the best way to improve the film industry in China is to make use of partners' resources.

"As for production, we can establish a co-production system with Hollywood, which has a well-developed industry for theme development, narrative techniques, production, and other processes and chains after 100 years of practice," she said, "Through cooperation with Hollywood, we can find some shortcuts and learn a lot, but we must localize them to establish a film industrialization system with Chinese characteristics."

Co-productions have often found it difficult to harmonize localization and internationalization. How to overcome cultural differences and maximize the shared growth between local and international markets became the forum's focus.

In this regard, Finnish film director Renny Harlin emphasized that Hollywood films generally pay special attention to global marketing. Creating universal symbols and shaping a sentiment that can arouse a global resonance are important factors that determine a film's prospect. Particularly, emphasis on emotion is important.

President of CMC Pictures Ying Xujun noted that the most important aspects of a co-production are global cooperation, global distribution, and global revenue-sharing. "What Sino-foreign co-productions, such as 'The Meg,' value the most is how to apply Chinese elements properly, among which character creation is foremost. These characters should not only reflect the modern, positive, strong, and intelligent characteristics of Chinese people but should also be received well by global audiences."

Dato' Norman bin Abdul Halim, president of KRU Entertainment and deputy chairman of the National Film Development Corporation Malaysia (FINAS), shared his international cooperation and distribution experience. He said the idea of resolving cultural differences is simple: to reach out to the world from its local base. In the local creation of films, it is crucial to design a concept and story that can meet the expectations of key target markets and win the recognition of local audiences. Action movies can enlarge the charm of the storyline and reduce the impact on cultural implications.

In terms of operation, senior vice president of Bona Film Group Jiang Defu stressed that pragmatism and being in awe of the film are particularly important. For private enterprises, the most obvious pragmatism is reflected in two aspects: one is to meet the shooting standards, and the other is to save costs, so it is necessary to find a creative point and a production system that enable the two to be compatible.

Jiang also added that Chinese filmmakers should work hard to please the domestic audience first. "We are the second-biggest film market now. We should slow down and do your own things right. We can work with foreign companies, but we should make sure local audiences love your films first. We should make our foundation solid before we go out to the world."

The unexpected COVID-19 pandemic has severely affected the film industry's development pattern and international collaboration models. President of Mahua FunAge Liu Hongtao noted that the COVID-19 pandemic has caused filmmakers all over the world to face a serious challenge. However, Chinese filmmakers are actively drawing on and exploring international expression, which gives the film market a lot of hope, since the audience's demand for movies will not change.

Although it has been impossible to shoot films during the COVID-19 pandemic, as much as possible, filmmakers all over the world have tried to explore and actively seek new forms of cinematography and ways of working. Japanese director Shunji Iwai has revealed that he completed the film "The 12 Day Tale of the Monster that Died in 8" using remote filming and mobile photography during the pandemic in May. "When the pandemic ends, I will definitely come to China to meet my old and new friends," he said affectionately.