Two Jiading residents, Zhou Fenglin and Zhao Xingzhou, were honored by the National Poverty Alleviation Project in Beijing last month for their efforts to improve education in rural areas. They have devoted themselves to alleviating poverty, bringing love, faith and hope to students in poor parts of the country and build their confidence for growth which will be of immense benefit to them in their future lives. Following are the stories of their personal practice through educational help. 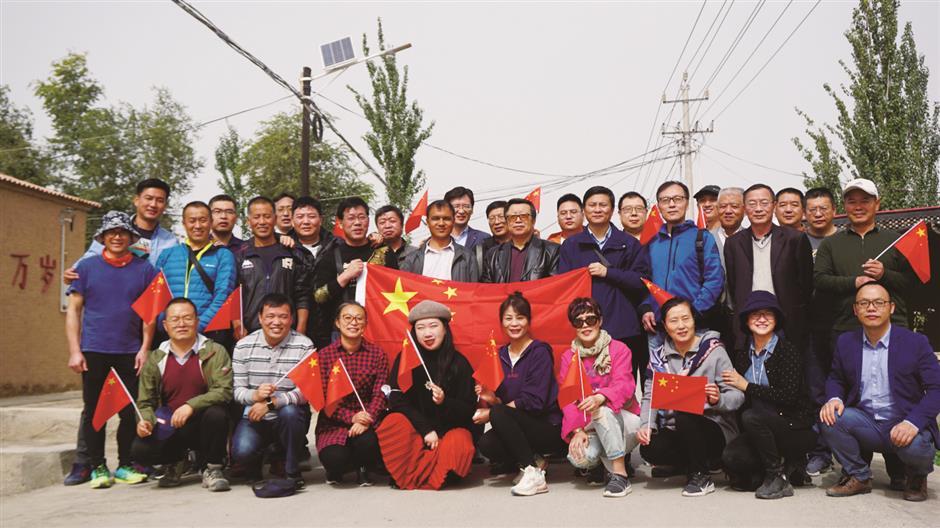 Zhou Fenglin (center) was in charge of the second group of Shanghai teachers who assisted in improving education in Xinjiang’s Kashgar Prefecture last year.

When he talks about the children in Kashgar Prefecture in the Xinjiang Uygur Autonomous Region, Zhou Fenglin always has a big smile on his face. When his wife sent him pictures of the magnolia flowers in Shanghai as he attended the national poverty alleviation awards ceremony in Beijing, he immediately forwarded them to students in Kashgar, noting that: “Magnolia, the flower of Shanghai, is as beautiful as you.”

Zhou, 63, was a teacher at Jiading No. 2 High School and had devoted himself to education for over 40 years. After he retired, he concerned himself with education in remote areas and took the lead role in the second group of Shanghai teachers to assist in Xinjiang, part of a volunteer teaching program initiated by the Ministry of Education. He launched the “Magnolia Construction” project, taking a group of 220 teachers to help improve education in Xinjiang last year.

Zhou also took on the role of headmaster at Kashgar No. 6 High School.

The environment of a school is vital to students not only because a beautiful exterior can be a feast for the eyes, but it can also provide healthy conditions for students.

After arriving at the school, Zhou heard the students saying that before you ask where the restrooms are you can find them by the unpleasant smell. Some might have regarded that as a joke, but Zhou took it seriously.

“It was not their casual remarks but a true situation. I felt aggrieved when I saw the restrooms, so I pondered what I could do to make changes,” said Zhou.

He later launched a “campus health improvement” project to thoroughly renovate the restrooms.

“Now I can say the restrooms are as clean as the ones in hotels,” said Yu Jiang, director of studies at the school. “It was headmaster Zhou who applied for the opportunity from our government to help enhance the environment, and he did all that on his own.”

Zhou carried a series of other measures in the following months, including building hot water facilities for hand washing, making improvements to two health-care rooms, adding 17 water dispensers and giving lectures on oral health, to provide a better living and study environment for students. This made the children like their headmaster even more as the changes he brought about were those they could never have imagined.

A teacher at the school said: “They have gradually developed the habit of washing their hands after going to the toilet and before eating, which leads to a healthier way of life. I believe it can benefit them in their future lives.” It was more important to help change students’ attitudes toward life than just upgrading hardware in the classroom, the teacher added. 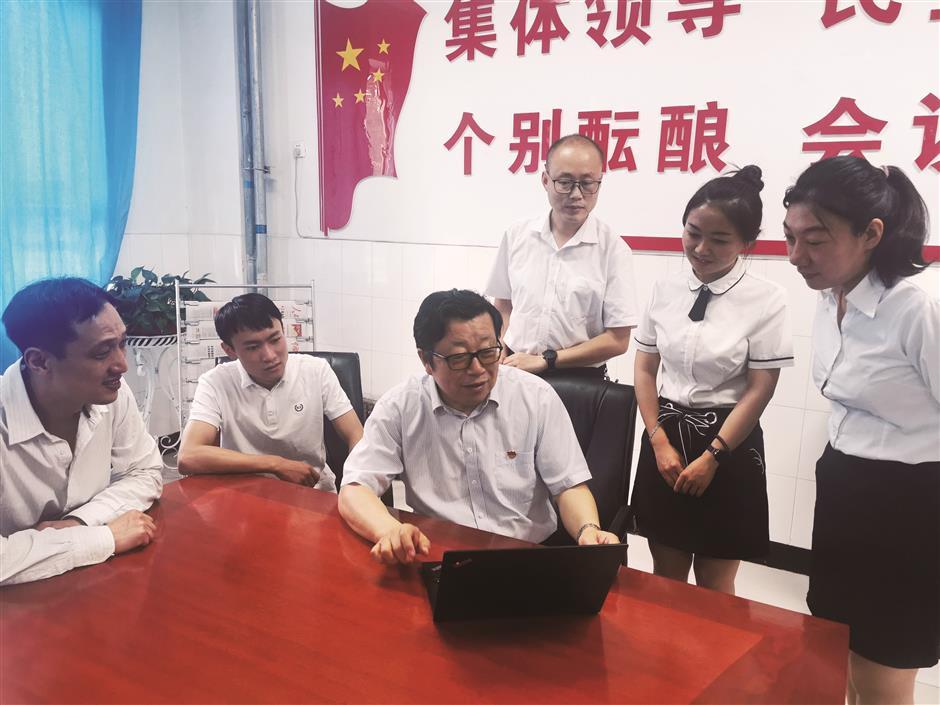 Zhou shares the latest technology and information with local teachers and students.

“Kids always asked me what the schools looked like in Shanghai, so I showed them pictures. I could feel they were eager to get to know about the outside world,” Zhou recalled. “Although Kashgar is thousands of kilometers away from Shanghai, I hope the children here can study in modern schools like those in big cities, and my mission was to narrow the gap.”

In addition to improving the facilities, Zhou was also committed to building a local team that could raise the students’ capabilities.

Thirty workshops were launched through the Magnolia Construction project to offer useful advice to 170 local teachers. Most of the mentors were special and senior-grade teachers from Shanghai. The project promoted the development of local teachers’ specialities through methods such as pairing and mutual instruction, aiming to create a team of outstanding teachers in Kashgar.

“The number, energy and emotion of teachers involved in the project were unprecedented,” said Yu. “Their teaching ways were refreshing to us. We recorded the classes for reference to raise our own abilities.”

Zhou also organized a weeklong activity to present the results of the project to teachers in the region. He invited experts in basic education and headmasters and teachers from famous schools in Shanghai to Kashgar to give lectures and communicate with their peers face-to-face about advanced teaching concepts and techniques. In addition to the basic high school subjects such as Chinese, math, English, physics and chemistry, the activity covered course development, research guidance and moral education with 352 teachers in 12 cities and counties in Kashgar joining in. The project was given the thumbs up by the local education bureau and regarded as a classic case of Shanghai’s poverty alleviation work in 2020.

Before heading to Kashgar, Zhou had started to think about the future development of its schools. Combining the actual situation at Kashgar No. 6 High School and his own experience of school management in Shanghai, he completed a five-year development plan for the school which sparked discussions among local teachers.

“We couldn’t imagine a school with no plan in Shanghai. It is hard to realize the long-term development of a school without any plan, even with a management team that has abundant experience,” said Zhou. His plan was approved last July with a target of establishing a first-rate high school in Xinjiang.

In the French movie “Les Choristes,” school supervisor Clement Mathieu approaches the students through music instead of physical punishment, melting the hearts of both students in the movie and audiences in the cinema.

Zhao Xingzhou, a retired biology teacher from Jiading Yangliu Middle School, is “teacher Mathieu” in real life, delivering musical notes to children in remote areas and hoping they can get to know the charm of music and understand the beauty of life through his classes. Zhao Xingzhou took children from Golog Prefecture in Qinghai Province to Shanghai to give a performance at the Shanghai Poly Grand Theater.

In 2019, he made a decision to take part in improving education in remote areas by heading to the Tibetan Autonomous Prefecture of Golog in Qinghai Province which stands at an average altitude above 4,000 meters. He carried with him two intentions during his journey to the plateau. The first was to look for inspiration to create songs and, more importantly for the biology teacher, he wanted to fulfil his dream of being a teacher of music.

Recalling the time when he worked at the first school in the countryside after graduation, teachers were free to sing, dance and play musical instruments, gaining happiness from music. He wanted to pass down the joy triggered by music to more students.

Although Zhao taught biology, he is adept at singing and can play several instruments such as the piano, flute, trumpet and string instruments. He has also made his own violin.

So when he heard the news from the Jiading poverty alleviation bureau that an ethnic minority boarding middle school in Jiuzhi County in Qinghai’s Golog Prefecture needed a music teacher, he immediately made up his mind to apply.

The school has 951 students in three grades, most of them Tibetan, and Zhao was responsible for giving a music course for eighth graders in nine classes.

Zhao spent a week settling in and was surprised to find that the school had a number of a musical instruments including violin, viola, cello, flute, clarinet, piano, guitar and drums in conditions even better than many schools in Shanghai.

Dong Mei, the headmaster, told him that the school had been without a music teacher for a long time, so the instruments had just been set aside.

Zhao took every one of them out, made sure they were playable and brought them to the next week’s class.

After noticing that local students didn’t know the number system of musical notation and weren’t able to follow a rhythm during class, he rewrote the course, teaching students from scratch with the simple notes of do, re, mi, fa, so, la, ti do.

“Children here knew little about the basic knowledge of music, which required me to be patient enough to tell and teach them,” said Zhao, adding that his ultimate goal was to train them so that they could sing following a score and in tune. “These Tibetan students are fond of music from the bottom of their hearts, so I felt it was my duty to make their lives richer with melody.” 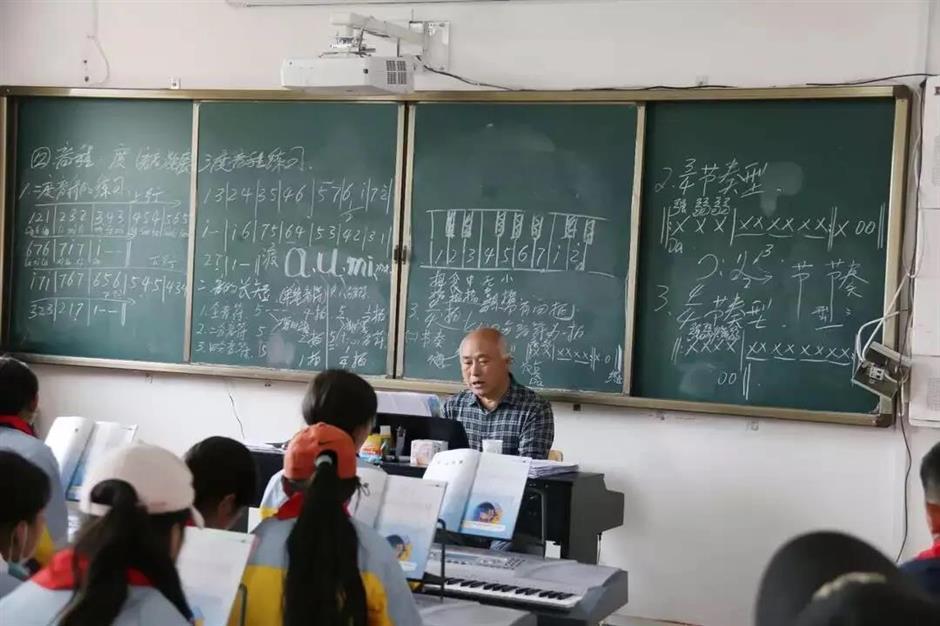 Zhao writes down the basic music knowledge such as the number system of musical notation on the blackboard and wrote the textbook, teaching students from scratch with the simple notes of do, re, mi, fa, so, la, ti do.

After hearing about this music teacher from Shanghai, Xu Zongjun, principal of the Jiuzhi County ethnic minority primary school also wanted Zhao to give lessons to second to fifth graders. Zhao’s reputation spread among more and more local schools and his time became fully occupied with music classes, but he never complained.

“I tried my best to help them since they were truly in need. Teachers have a responsibility to share whatever they know to help students, and that includes me,” said Zhao. “They have more talent in music than children in Shanghai, but they had a weak foundation and lacked training and guidance from professional teachers. I hope they can go further with my efforts.”

Zhao officially retired last December. After giving the last class, the children rushed onto the stage to hug him and put a hada (a scarf that is a traditional Tibetan gift) around his neck. Zhao was moved to tears and reluctant to leave.

Although his voluntary teaching work has finished, he has already started planning to go back to Qinghai.

“There is more I can do and I should do, and I’ll strive to make the education industry prosperous in Golog Prefecture and keep helping to narrow the gap,” he said. 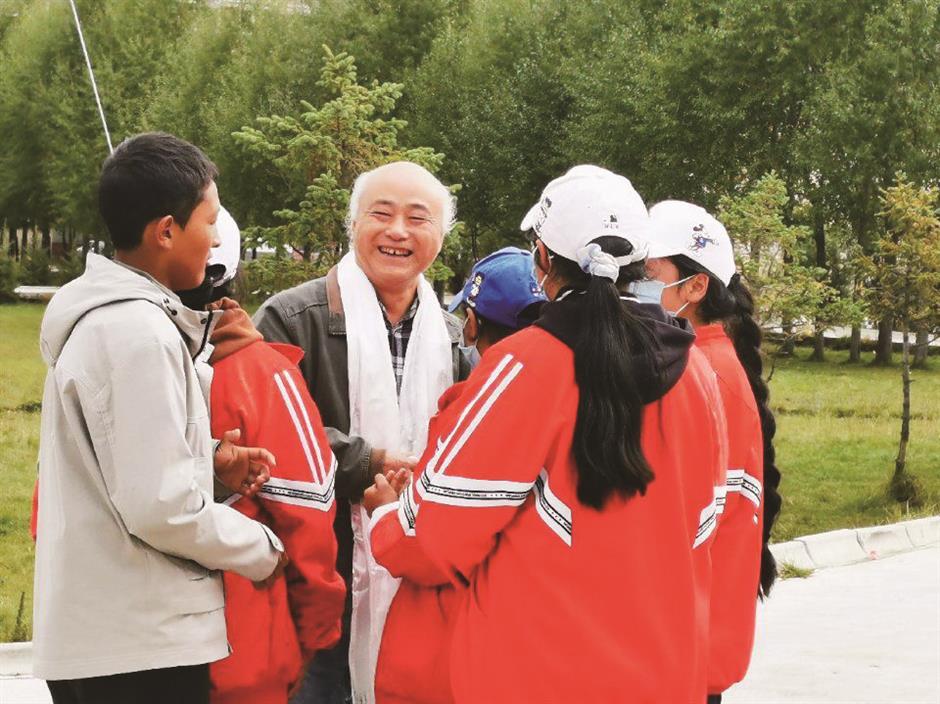 Local students put a hada, a scarf that is a traditional Tibetan gift, around Zhao’s neck to express their gratitude for his teaching.