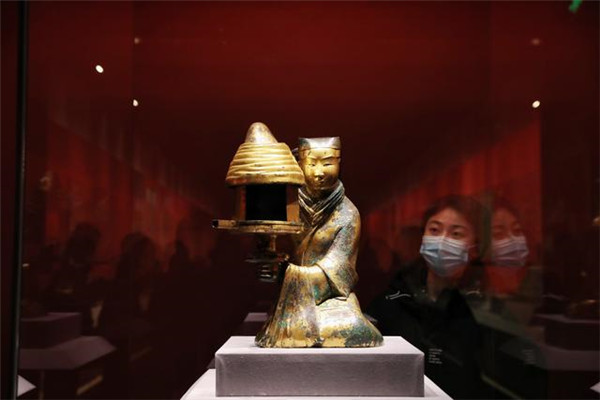 The Changxin Palace Lamp, a bronze artifact dating back to the Western Han Dynasty (206 BC-AD 24), is displayed at the exhibition titled Origins, Developments and Achievements of Chinese Civilization, which opened on at the Palace Museum in Beijing on Jan 25, 2022. [Photo by Jiang Dong/China Daily]

China has made substantial headway in preserving and carrying forward the country's cultural heritage over the past 10 years, statistics and figures have shown.

Over the past decade, local governments of 27 provincial-level regions have factored the preservation of cultural heritage into their performance evaluation systems, according to a national conference on cultural relics held in Beijing on Friday.

The amount of provincial-level cultural relics protection units has increased by 58 percent, and that of municipal and county-level has grown by 88 percent, according to the conference.

Major cultural relic-protection projects for the Great Wall, the Grand Canal, and others have been completed, and tens of thousands of curated or excavated valuable cultural relics have been restored to a better state, said the conference.

Major archaeological projects, such as the project to trace the origins of Chinese civilization, have achieved new progress. In particular, Chinese archaeologists have broken new grounds in deep sea archaeological missions.

In the past decade, the number of museums nationwide has increased by 60 percent, and massive technological breakthroughs have been made in cultural relics protection, according to the conference.

Meanwhile, relevant authorities have increased their legal support to protect cultural relics. Local governments across the country have issued and implemented more than 200 localized statutes on the protection of cultural relics.