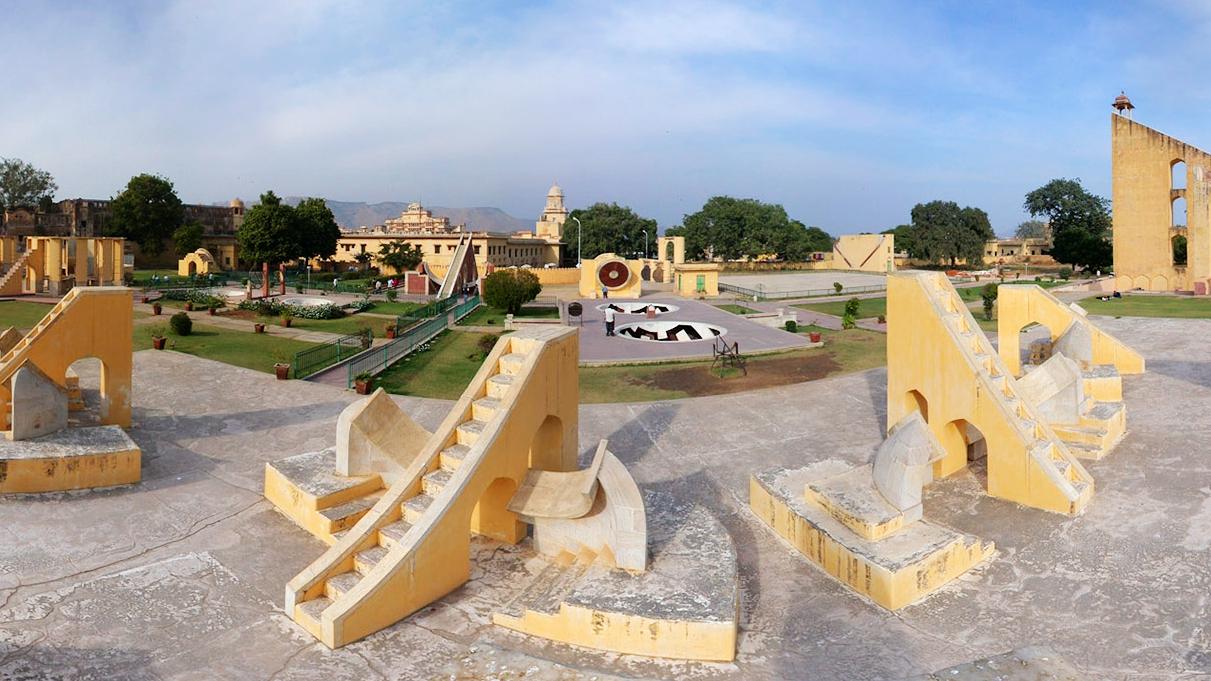 A general view of Jantar Mantar, a collection of 19 architectural astronomical instruments based on ancient Indian astronomy, in Jaipur, Rajasthan, India. (Photo via www.jantarmantar.org)

Ancient Asian civilizations like China and India had literally scaled "astronomical" heights, making social, spiritual and scientific endeavors much before the West emerged from the so-called Dark Ages, according to Indian Sinologist Prof. B.R. Deepak.

"As we all know, the concept of zero came from India which made huge breakthroughs in mathematics, sciences and astronomy. Indian astronomers were the first to precisely calculate the diameter of the earth and other planetary motions. This knowledge eventually reached the Greek civilization and disseminated further into Europe," Deepak said in an interview with CCTV.

The earliest Indian astronomical texts "Vedanga Jyotisha" dates back to 1400-1200 BCE and works of medieval Indian mathematician-astronomers Aryabhatta, Brahmagupta and Varahamihira are well documented. There's numerous evidence of a two-way exchange of such knowledge between the Indian, Persian, Greek and even the Chinese civilizations.

"Similarly, the Chinese calendar is a testimony to ancient knowledge about the lunar cycle. The months start with the new moon and the number of days in a month and a year are precisely calculated. These were one of the brilliant discoveries by ancient people. The Chinese calendar was later adopted across Northeast and Southeast Asia," said the professor of Chinese and China Studies at Jawaharlal Nehru University, New Delhi.

"As China has a very strong textual tradition, we can find records of these exchanges, discoveries and inventions right from [the time of] Emperor Qin Shi Huang about how the calendar was implemented, and even during the Han Dynasty. It was an extremely well-developed system which led to the advancement of civilizations, cultures and also the productivity in the society," he elaborated.

The Sinologist also pointed out the four great inventions in ancient China – papermaking, printing, gunpowder and the compass – and also the production of silk had an immense impact on the entire human civilization.

At the same time India was home to one of earliest civilizations in Asia – the Indus Valley Civilization that dates back to 3300 BCE – Deepak noted, stressing that the real significance of this came around 2600 BCE with the emergence of the first "city-states" in the world.

"They were the first to build brick houses and a sophisticated drainage system. The historical records and excavated relics from various sites, some of which are now in Pakistan, clearly points out that this was one of the earliest and very advanced city-state civilizations which had its own belief system and a script," he elucidated

"So, it was amazing especially when the West was in the Dark Ages, Asian civilizations were thriving with new inventions and making contributions to mankind," Deepak remarked, noting that for much of the period before the 18th century, China and India collectively contributed more than 50 percent of the global output and wealth.

China and India's contributions to human civilization can also be found in the spread of two ancient philosopher-teachers, Confucius and the Buddha.

"Confucianism is a wonderful philosophy and it talks about peace, peaceful coexistence and non-violence. These are the precepts which is common in all Asian civilizations and have become the core of the Asian value system, especially in China and East Asia which have accepted Confucian values as part of their social value system," emphasized Deepak, who has himself translated four of the major books on Confucianism.

Buddhism developed in India, but it reached China through a circuitous route through Central Asia. On the way, it absorbed many components from these regions which were incorporated by Chinese civilization, the Indian professor explained.

"The translation of Buddhist sutras was huge. For example, Indian scholar monks such as Kumarajiva, Bodhidharma, Paramartha and there were thousands others who went to China in waves after waves and engaged in the translation of sutras," Deepak said.

"This is a wonderful example of how the first translation industry by way of exchanging ideas, exchanging various things related to the civilizational dialogue, flourished in China and in fact innovated into a different product which was totally different from the Indian Buddhism, which is now known as Chinese Buddhism," he remarked.

Stating that there were innumerable examples of how ideas and knowledge traveled between China and India in ancient times, Deepak narrated an interesting anecdote of why sugar is called "cheeni" (meaning "from China") in many Indian languages.

Sugar-making technology was transferred from India to China during the Tang Dynasty. China improved the process further and exported the new variety of sugar back to India, where it came to be known as "cheeni," he explained.

The professor of China studies cited the trade of paper as another example of civilizational dialogue. "It was discovered in China from where it was disseminated into India and to various Central Asian republics, and then from Central Asian polities to Europe."

Both civilizations can be found through different parts of Asia. Even today, some of the myths and stories from India's epics like Ramayana and Mahabharata, are still performed in countries like Thailand, Indonesia, and Cambodia.

"The civilizational dialogue that we have been talking about can be found all the way, wherever we find the traces of the Silk Route, whether it is the Central Asian Silk Route or the Southern Silk Route, originating from Sichuan and then entering Myanmar and extending to India, or the Maritime Silk Route. So, you'll find the imprints of this exchange very much alive even today," he elaborated.

Lauding Chinese President Xi Jinping's call for building a community with a shared future for mankind, the Indian Sinologist said: "President Xi's vision is extremely relevant and very timely as far as the resurgence of Asian civilization is concerned. Also, this has coincided with the shift in gravity from the Atlantic to the Pacific. Asian civilizations should seize this opportunity and realize the community of shared future."