By Xing Yi in Shanghai | chinadaily.com.cn 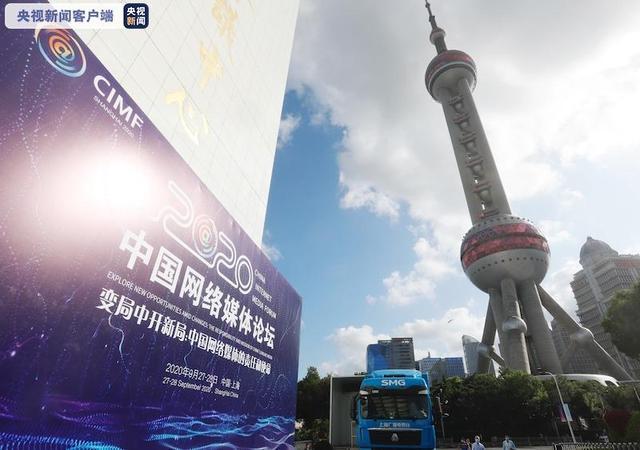 The 2020 China Internet Media Forum opened in Shanghai on Sunday, with its theme focused on the mission and responsibilities for Chinese internet media in an era of changes.

The two-day event included a main forum and four sub-forums on content, technology, industry and responsibility, gathering experts from news outlets and internet companies to offer their insights.

The prevalence of smart phones in recent years has not only brought ubiquitous internet access to the public but also made it possible for the large-scale spread of rumors and misinformation.

Li Yanhong, chairman and CEO of Baidu Inc, said internet media in China has undergone a main change in its more than 20-year development — from displaying the same web pages for all online visitors to feeding different users with a tailored information flow.

"With the algorithm becoming a key for internet media, are users seeing a bigger world or smaller world?" Li asked in a rhetorical question.

"An algorithm should not simply feed users with the kind of news they're obsessed with, but understand users' higher purpose," he said. "The direction of development for internet media should be squared with users' fundamental interest."

Li said during the battle against COVID-19 the company launched a new channel to provide authoritative news updates to the public, and collaborated with public health institutes and media outlets to improve public awareness of related health knowledge.

According to Ren, the company provided fact check services 700 million times and handled 40,000 rumors on its open platforms from the early days of the novel coronavirus outbreak to mid-April.

"As a platform company, we will play our role in directing web traffic to good deeds with help from related parties," Ren said, citing examples of the company's annual charity campaign helping non-profit organizations to fundraise, and its collaboration with cultural institutions to promote traditional Chinese culture.

Despite the internet changing the way people get information, the mission for news outlets remains the same — producing accurate, serious and timely content for their audience, experts from traditional media said.

"Content is still the king," said Wang Huimin, a member of the editorial board of People's Daily. "Long-time practice has shown that the credibility of a news outlet relies on its constant production of in-depth and accurate news."

Wang said a news outlet should not overlook its role in providing orientation for society.

"The form of media technology will change, but media's responsibility of educating the public will not change," Wang said.

Sun Yusheng, senior producer of China Media Group, which was founded with China Central Television, China National Radio and China Radio International in 2018, said being on the spot is the golden rule for news media.

"One of our key responsibilities is to provide accurate information when a major event breaks, and satisfy the audience's concern about hot topics," Sun said. "Since the outbreak of COVID-19 happened in Wuhan, we have sent 216 reporters since Chinese New Year's Day, and broadcast a 24-hour news program, Fighting COVID-19, for 73 days."