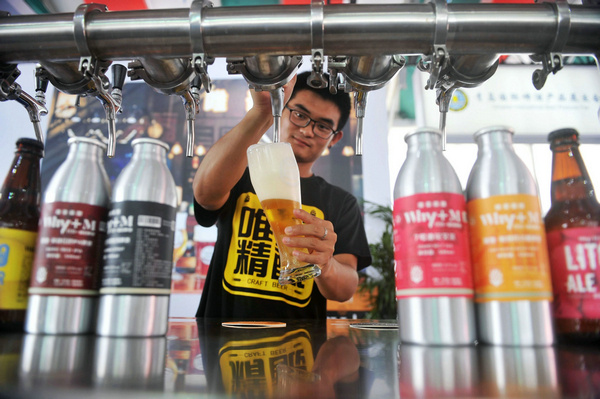 BEIJING－Designer Mu Yang likes to occasionally grab a beer after work while hanging out with friends, but he has a preference for good-quality craft beer. Therefore, he makes a conscious effort to pick out places offering such brews.

During a business trip in October, Mu visited Peiping Machine, a well-known craft beer bar in Beijing. "My favorite is stout, with dense foam, roasted aroma, and a hint of chocolate," says Mu.

China has always been a huge consumer of beer, but preferences are shifting away from industrial beers to more premium and craft flavors. As a result, sales growth of cheaper beers has been on a decline in recent years, while demand for high-end beers is rising.

Li Wei, founder of Peiping Machine and former president of the Beijing Homebrewing Society, has witnessed the rapid growth of the Chinese craft beer market since he became engaged in the industry in 2012.

"When the association was established, there were only a dozen members. It was difficult to buy craft beer and most were imported with a price as high as more than 200 yuan ($30) a can," Li says.

"But now the association has more than 4,000 members, and the price of craft beer has dropped to tens of yuan a can," says Li.

According to statistics from the Beijing Homebrewing Society, Beijing had only 30-plus stores in 2013 that sold fine craft beer. The number had increased to more than 90 in 2014. Currently, the city has more than 6,000 bars and restaurants selling craft beer.

Zheng Miaohui has 15 years of experience in beer production equipment and technology. He is now the Asia-Pacific director of a company producing heat exchangers, which are mainly used for the heating, cooling and sterilization of beer.

"In recent years, most of the increase in my company's orders came from China's craft beer industry," says Zheng. "Some big brewers have shut down their industrial beer factories and expanded their craft beer production lines or acquired craft beer brands."

As bars and restaurants in large cities like Shanghai and Beijing are experiencing an influx of customers, Zheng's team has started to provide them with a sales system for craft beer.

Compared with the US market, China's craft beer has great room for growth, the think tank says.

"The popularity of craft beer isn't a short-term trend, but an essential consumption upgrade," says Li. "People are eager to pursue the classic taste of beer and their taste for premium beer is growing."