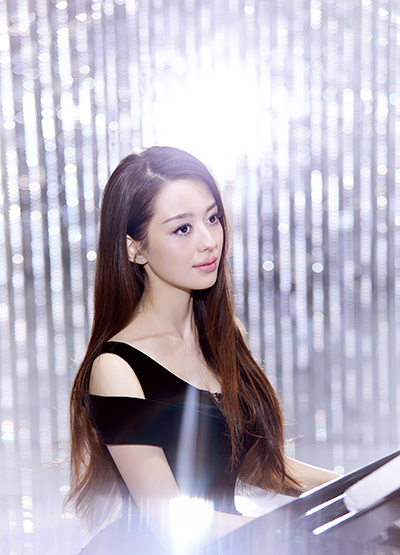 Over the past year, the celebrity couple have appeared at numerous concerts and reality shows together. Redlinger, 25, born to a German father and a South Korean mother in Wiesbaden, Germany, is better known by the stage name Gina Alice among Chinese audiences and has built up a large fan base in China.

On Aug 28, she is going to release her debut album, titled Travel Diary, featuring three music pieces, Chopin's Nocturne Op 9, No 1 in B flat minor, Rachmaninoff's Moment Musical Op 16, No 4, and Pinghu Qiuyue, or "Moon Over the Peaceful Lake in Autumn", a popular Chinese musical piece from Guangdong province and composed by Lyu Wencheng and later adapted for piano by Chen Peixun.

The idea of the album was inspired by the fourth season of the reality TV show, Viva La Romance, which premiered on June 6. Produced by Hunan TV, it follows celebrity couples traveling across China.

Lang Lang and his wife joined in the latest season of the reality TV show and traveled to places such as Xishuangbanna Dai autonomous prefecture in Southwest China's Yunnan province and Zhongwei in Northwest China's Ningxia Hui autonomous region.

"I selected the three music pieces, which connect the places I traveled to in the reality TV show," says Gina Alice. "Most of the places were new to me and I was impressed by the natural scenery and the local culture."

Xishuangbanna is famous for its amazing tropical rainforest and its diverse ethnic culture. She linked it to Chopin's works, "because the place is like poetry and very romantic".

When walking in the desert of Zhongwei, the vast space brought to her mind Rachmaninoff's Moment Musical Op 16.

"I've been to Guangzhou before, so it's a familiar place. I love the city, the food and folk music," she says, who performed with the Guangzhou Symphony Orchestra in December 2016.

"Pinghu Qiuyue is a beautiful folk music piece and it's well-known in Guangdong province," she says, adding that when she was a child, she loved playing pieces by French composer Claude Debussy, who was influenced by Chinese music and poetry.

"I love playing musical pieces by Chinese composers and now I am preparing for Yellow River Piano Concerto, and hoping to perform it onstage," she says.

The piano concerto was arranged in 1969 in a collaboration between Chinese musicians, including Yin Chengzong and Chu Wanghua, and is based on the Yellow River Cantata by Chinese composer Xian Xinghai.

During the reality TV show, she also played the piano and sang her original pieces. Fans have expressed admiration for her classical beauty, rich northeastern accent and devotion to her husband.

"I want to show the different side of a classical pianist by participating in reality shows," she adds.

Gina Alice started to play piano under systematic tutoring at 7 years old. Both she and Lang Lang were students of American pianist Gary Graffman. In 2018, she graduated with a Bachelor of Arts from the University of Music and Drama Hamburg.

During a reality TV show, titled Happiness Trio, by Tencent Video, Lang Lang shared a story. In 1994, Lang Lang, then about 11, was awarded first prize for outstanding artistic performance at the fourth International Competition for Young Pianists in Ettlingen, Germany.

"After obtaining the award, I flew from Frankfurt back to Beijing. On the same day, Gina was born in Frankfurt. It was an amazing destiny," says Lang Lang, 37, who was born in Shenyang, Northeast China's Liaoning province.

Gina Alice agrees and says: "After getting married, I feel very happy and I enjoy my new life. Family is very important to me."

She speaks German, French, Korean and English. She adds that Lang Lang taught her to speak Chinese and has helped her to better understand the Chinese musical pieces she plays.

With her classical music training, she also enjoys composing and songwriting.

She performed the song, River of Remembrance, which was released by Universal Music Group's China division last November as a promotional song for Frozen 2, the sequel to Disney's 2013 hit animation, Frozen.