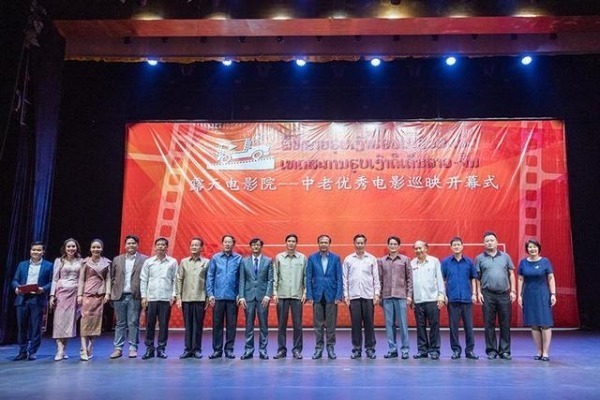 The China-Laos Film Festival 2021 invited famous Lao artists and professionals to participate in the dubbing of four Chinese movies and some Lao movies. (Photo provided to chinadaily.com.cn)

Organizers of the China-Laos Film Festival have expected to promote culture exchanges between the two countries as the 2021 version of the event are being held in Lao capital Vientiane.

Speaking at the opening ceremony of the film festival on Monday, Director of Department of Cinema Khamphao Vannavong said this is the fourth time that the Department of Cinema collaborated with the Chinese side to host the event, which has become an activity that integrates the friendly relations between the Lao-Chinese people with increasing popularity among Lao people.

"I believed that China-Laos Film Festival will become a platform for cultural exchange between the two nations by watching Chinese films in Lao language. It will also create opportunities for people of all ethnic groups in Laos to get to know and learn more about Chinese culture," said Khamphao.

The China-Laos Film Festival 2021 invited famous Lao artists and professionals to participate in the dubbing of four Chinese movies and some Lao movies.

The movies will be screened in eight provinces of Laos including Champasak, Sekong, Khammuan, Luang Prabang, Oudomxay, Huaphan, Bokeo and Xieng Khuang, besides capital Vientiane.

The opening ceremony was held by the Department of Cinema under the Lao Ministry of Information, Culture and Tourism in collaboration with China Media Group.

Lao Deputy Minister of Information, Culture and Tourism Savankhone Razmounty and more than 500 representatives from both sides attended the ceremony and watched Chinese films in Lao language.

Apart from showing movies, the Chinese side will also donate movie players, and train technical staff in Laos.