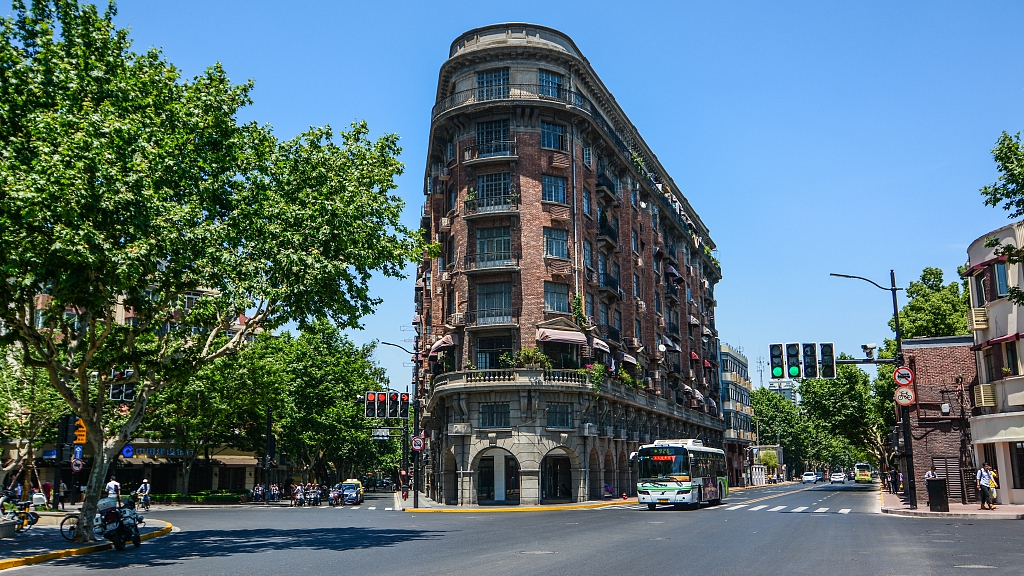 The Wukang Building, formerly known as the Normandie Apartments, is located in the former French Concession area of Shanghai. (Photo: VCG)

Shanghai is called "Paris of the East" for a reason. With an impressive collection of old European buildings, the city's colonial era has contributed to its cosmopolitan image.

But that colonial past resurfaced this week when Japanese retailer MUJI, which has a flagship store in a historic neighborhood in the city, used the name "French Concession" to describe the area in a social media campaign, drawing ire from Chinese internet users.

"Jog along the plane tree-lined street in the French Concession," the post read, describing the leafy neighborhood.

The old French Concession is recognized as a heritage site by visitors, but the name is not found in official documents.

The retailer later apologized and canceled the event after critics pointed out that the term "French Concession" is a thing of the past, when parts of Shanghai were under colonial rule. "Wake up, there is no more 'French Concession'!" read a Chinese media commentary, criticizing the Japanese company for lacking cultural sensitivity.

The controversy came amid heightened vigilance over foreign brands. A number of Western retailers had to apologize to Chinese consumers recently for listing regions in China as separate countries on their websites.

"The name carries with it a humiliating history. Why promote it?" one netizen asked. But not everyone felt the same. Some argued that many Chinese people, including local residents, still use the term casually. "It is just political correctness," another said.

Shanghai was one of the first Chinese ports ceded to Western colonialist powers after the first Opium War in 1843, the event that heralded China's "century of humiliation." Since then, waves of Westerners arrived to establish settlements in Shanghai and brought their ways of life. Because of this, Shanghai earned its reputation in the early 20th century as "the metropolis infested by foreign adventurers."

One of the main foreign settlements was the French Concession, a high-end residential area administered by the French consul from 1849 to 1943. The other was the International Settlement run by the British and Americans and joined by others.

However, the bourgeois chic that attracted foreigners and well-heeled locals to the French Concession in its heyday had little to do with ordinary Chinese, who were treated as second-class citizens in their own city.

This is epitomized by a famous scene in Bruce Lee's 1972 film "Fists of Fury," in which the protagonist destroyed a sign outside a Shanghai park that reads, "No dogs and Chinese allowed," in a symbolic act of defiance.

In 2009, Chinese authorities restored a concession-era building on the Bund according to its original British design, citing historical value. The restoration effort was viewed outside China as a sign of the country coming to terms with its colonial legacy.

Like Shanghai, a handful of other Chinese cities have also utilized their historical connection with foreign countries to advertise an open image and draw in investments.

But China's taste for European-style buildings didn't stop there.

In the vast swathes of suburban China, new commercial and residential developments inspired by old European architecture have sprung up. Businesses and home buyers can now get a slice of the European life without ever leaving China.

Some have gone so far as to deliberately duplicate places in Europe building by building, with no connections with the real locations on which they were modeled. Tianducheng, also known as the "fake Paris" on the outskirts of Hangzhou in east China is one such town that made international headlines for mimicking the French capital. The town even has its very own "Eiffel Tower."

One of the leading stylistic imperatives in China's suburban building boom has been Western historicism, wrote author Bianca Bosker on China's predilection for copying the greatest architectural landmarks of the West. According to Bosker, it's China's way of "owning" Western culture heritage on its own terms.

But some expats, as well as Chinese, think the ubiquitous faux European places in China are no more than make-believe for those wanting a different life. "They just have an idealistic idea about Europe that's not the European reality. But it's easier to sell," said Philippe Bouvet, a French art director living in Beijing. "The grass is greener outside your garden."

Bouvet said history is what made the former French Concession different, and shouldn't be forgotten just because it is not a "good" memory. "A country can only be strong by learning from its painful past," he said.

"It's part of China's history."