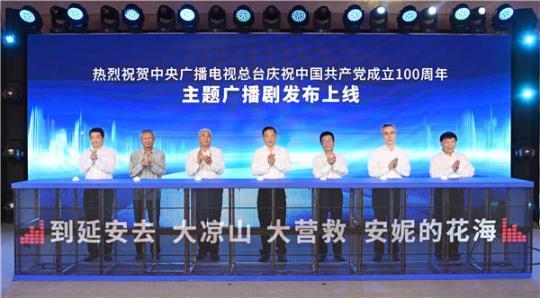 Four audio dramas produced by China Media Group to celebrate the 100th anniversary of the founding of the Communist Party of China were launched in Beijing on Wednesday.

Among the four dramas, Daliang Mountainand Annie's Sea of Flowersshed light on China's poverty-alleviation efforts. Go To Yan'antells the story of a group of patriotic young people who went to Yan'an, the cradle of the Chinese revolution, and eventually grew to be determined revolutionary fighters. And The Great Rescueis an artistic reproduction about the history the CPC secretly rescuing hundreds of patriotic people and cultural celebrities in Hong Kong after the Japanese invaded Hong Kong in 1941.

According to Shen Haixiong, head of China Media Group, "The four audio dramas carefully selected real stories from different periods in the history of the CPC for artistic recreation, showing the spirits of the CPC members and interpreting the original aspirations and missions of them."

The crew members also explored innovative expressions of audio dramas and made them visible and lively.