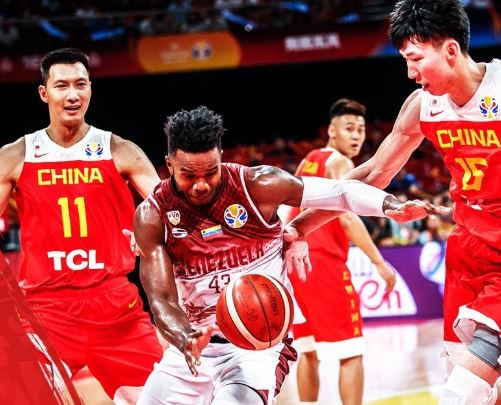 BEIJING, Sept. 4 (Xinhua) -- Hosts China will not play in the round of 16 at the 2019 FIBA World Cup after losing 72-59 to Venezuela in its final Group E game here on Wednesday.

The result saw Venezuela progress into the competition's next stage, while China will drop into the classification round.

"We made a lot of preparation. We played tight in offense at the very beginning. We let Venezuela grab 20 offensive rebounds, which is very hard for us," said China's head coach Li Nan.

Before tip-off, the Chinese team knew only victory would do, but still they trailed 33-23 at the half-time buzzer. The hosts saw a glimmer of hope when Zhao Jiwei made two consecutive three-pointers during the last minute before the interval, but Venezuela soon answered with a pair from downtown.

Offensively, China suffered from the same problem that had plagued their defeat against Poland. When confined in the paint, the team scored just one of seven three-pointer attempts in the first period.

Venezuela's Dwight Lewis and Heissler Guillent took turns to attack the rim, and their team grabbed 14 rebounds in total in the first quarter alone, eight more than China managed.

Fang Shuo stood out in the second half for China, but not enough. With a three and a jump shot, he led his team to trim the gap to five points with six minutes to go in the third quarter, the smallest deficit China had during the whole game.

China couldn't find ways to deal with its disadvantage in long-range shooting and rebounds, and the Venezuelan shooters seemed comparatively unstoppable.

Guillent put up a game-high 15 points, with three of his Venezuelan teammates scoring double digits. Fang Shuo scored 13 points in 22 minutes for China.

"They grabbed 21 more rebounds than us. We didn't do well on execution. It feels bad to lose the game. We'll try all our best and focus on the next game," Chinese guard Fang said, referring to the classification round of 17-32 to be played in Guangzhou.