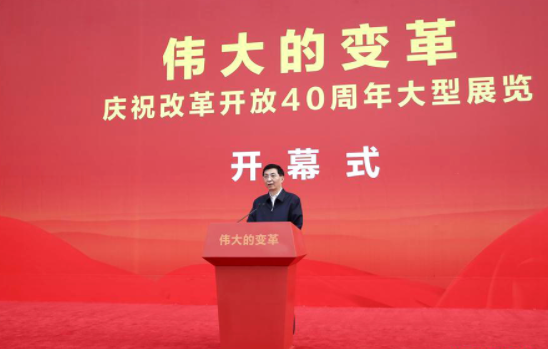 Wang Huning announces the opening of a major exhibition to commemorate the 40th anniversary of China's reform and opening up at the National Museum of China in Beijing, China, November 13, 2018. (Photo: Xinhua)

A major exhibition opened at the National Museum in Beijing on Tuesday, November 13, to commemorate the 40th anniversary of China's reform and opening up, and it featured the fruitful results it has brought to every aspect of the lives of the Chinese people.

Noting the unprecedented changes that have taken place over the past four decades, especially the historic changes after the 18th CPC National Congress, Wang said the exhibition aims to show the great achievements the Chinese people have made under the CPC leadership on the path of socialism with Chinese characteristics.

The grand exhibition, consisting of six sections, features a wide range of segments including economy, technology, environment, culture, and education, presenting a colorful facet of the country's 40-year development and its people's lives.

Massive historical photos, texts, videos and miniature models showcase the process by which the Chinese nation has stood up, grown rich and became strong.

The exhibition also has many interactive zones where various technologies such as VR and AI are employed for visitors.

There are also oil paintings displayed in the corridors to introduce figures who have made special contributions to the course of reform and opening up.

A tunnel that links two sections features a huge screen showing beautiful images of China and the Chinese people captured over the past 40 years by photographers from Xinhua News Agency.