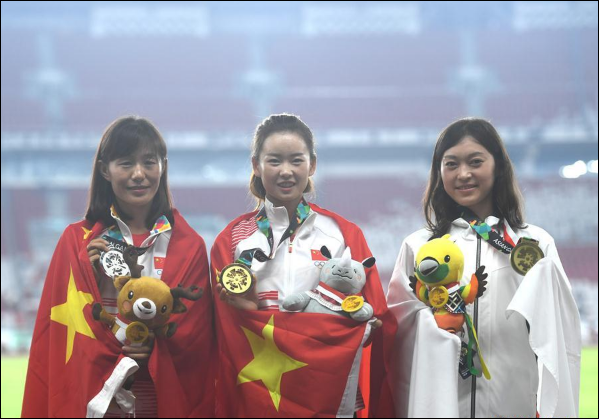 China bagged two golds from athletics at the Asian Games here on Wednesday, remaining top of medal tally in the sport.

The golds came early from the first two events of the day. China's Wang Kaihui, 24, came from behind to beat Japanese Toshikazu Yamanishi to win the men's 20km race walk in his Asian Games debut.

The 24-year-old Wang outraced Yamanishi before the finish line, ending the "long march" in 1:22:04. Six seconds later, the Japanese got the silver, and Wang's teammate Jin Xiangjian bagged bronze in 1:25:41.

In the women's event, China's Yang Jiayu and Qieyang Shijie hit the finish line both at 1:29:15, a new Asian Games record. The outcome came down a photo finish between the two and Yang was declared gold medallist. Qieyang rest on silver and Japanese Kumiko Okada pocketed bronze at 1:34:02.

It is the ninth Asiad gold in straight for China in this event.

"I wanna be the future of China's race walk and do better at Tokyo Olympic Games," said the 22-year-old Yang.

Yao Jie earned another silver for China in men's pole vault. It is Seito Yamamoto from Japan to set new Games record of 5.70 meters to win gold. Patsapong Amsam Ang harvested a precious bronze for Thailand on the field.

Wei is not satisfied with her performances in Jakarta. "It's bellow my expectation, but acceptable," she said.

Despite the losses at individual events, Wei is very confident with the coming women's 4x100 relay competitions, in which China is the defending champion.

In men's triple jump, defending champion Cao Shuo from China lost to Indian Singh Arpinder who claimed the title in his third attempt of 16.77 meters.

The men's 200m final turned out to be a tussle between Japanese Yuki Koike and Yang Chunhan from Chinese Taipei who both finished the race at 20.23s side by side. The Japanese only won gold in a snap as his one foot crossed the finish line first. Yaqoob Yaqoob won Bahrain the sixth bronze with a time of 20.55s.

In the last event of the day, Nadiya Dusanova and Svetlana Radzivil both renewed personal best to win gold and silver for Uzbekistan from women's high jump. Nadezhda Dubovitskaya earned bronze for Kazakhstan.