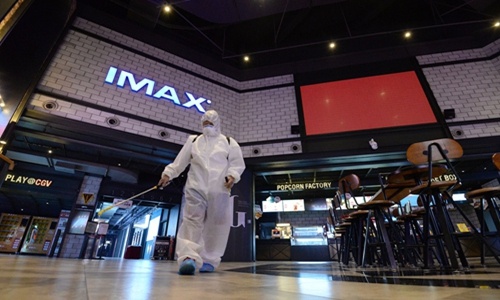 An employee of a cinema in Handan, North China's Hebei Province disinfects the foyer on Sunday to prepare for the movie theater's re-opening on Monday. (Photo: VCG)

Chinese theaters reopened for business on Monday, after closing for more than 170 days due to the COVID-19 outbreak. Box office pre-sales nationwide surpassed 1 million yuan ($142,876), which thrilled Chinese moviegoers on social media.

According to a document sent to Global Times by Chinese ticketing platform Maoyan, as of Monday, box office pre-sales on the first day of the reopening of theaters across China topped 1.55 million. The top three films in terms of box office pre-sales were A First Farewell, Coco and Sheep Without A Shepherd.

About 50,000 people have visited cinemas nationwide, and 198 cinemas in China have updated their data. There are 6,101 screenings, according to Maoyan.

The hashtag for "box office breaks 1million on first day of resumption nationwide" gained 110 million views on China's Twitter-like Sina Weibo in a matter of hours.

"This is such good news. I can finally watch a film in a cinema," one Chinese netizen wrote on Weibo.

The first cinema to reopen in China sold out all 32 tickets for the film A First Farewell released in Hangzhou, East China's Zhejiang Province, at 12 am on Monday, since epidemic-related measures require that seating capacity must be limited to 30 percent per showing.

Audience members wearing masks took pictures with their mobile phones to record this remarkable moment in Chinese film history before the movie started.

An employee at the theatre said that the cinema had begun preparing to resume operations since the China Film Administration announced on Thursday that cinemas in low-risk areas can reopen from July 20, while those in high-risk areas will remain closed, as the country has contained the virus spread.

"Every effort we have made is aimed at bringing the cinema back to the audience at the earliest time," said the employee.