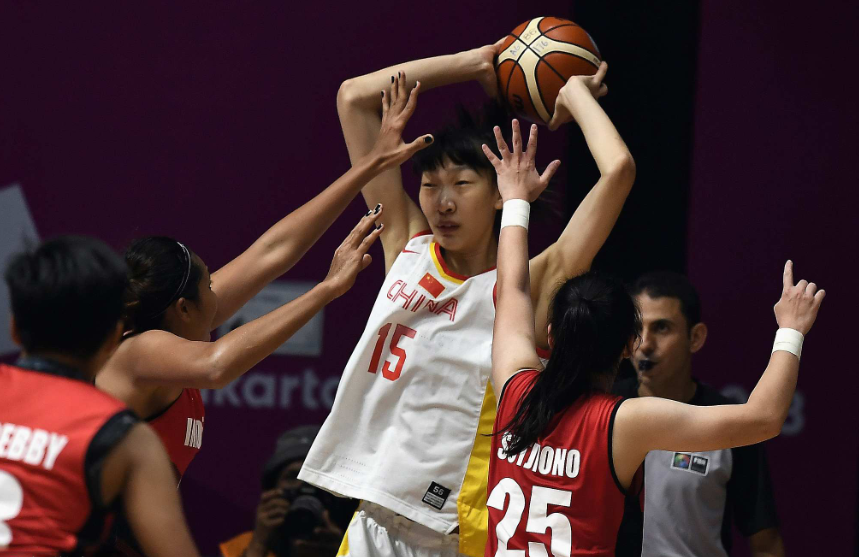 Han Xu of China holds off Indonesia players during the Women's Basketball quarterfinals match between China and Indonesia at the Asian Games, on August 26, 2018, in Jakarta, Indonesia. (Photo: VCG)

China's opening 64-61 win over Latvia at the FIBA Women's World Cup also put the spotlight on 19-year-old Han Xu. The center is considered a prospective star on the women's national basketball team and was part of the squad that won gold at the recent Jakarta Asian Games.

In the Group D opener, Han had eight points and 10 rebounds in 23 minutes. It was a decent performance by the teenager who had no professional experience before she was selected for the national team this year. “I really didn't expect such a leap in my career, but I am always ready,” Han said after the match.

She made her World Cup debut midway through the first quarter when she replaced Li Yueru and in no time, extended China's lead to three with a superb lay-up. The 19-year-old moved well on court despite standing 2.05 meters tall.

Her talent is highly rated by coach Xu Limin. “I think she is a little bit thin, but her talent and mental quality are very high so she has a lot of room to improve," the coach said. "I believe that as long as she has receives organized training and is able to seize good opportunities, she can become the best female basketball player in the world.”

Han herself can still see her weaknesses in the game.   “I think my performance was just so-so, especially on Latvia's last free throws when I wasn't able to get the rebound, which gave the opportunity to them. So I felt a little bit anxious at that time,” the Chinese center conceded.

Han helped China achieve a third straight win in the International Youth Women's Basketball Challenge last year, and pocketed more glory at the Asian Games in Jakarta. But this is just the beginning for this future star.