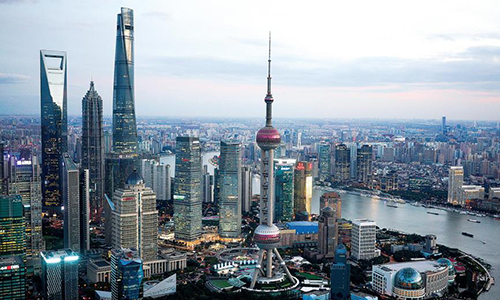 More than half of the respondents in a Global Times poll covering 17 countries believe China's image is improving, with the majority of participants attributing this positive trend to China's rapid economic development and leading technological achievements that have benefited the world.

The poll was conducted from November 20 to December 3 by the Global Times' Global Poll Center, whose respondents were residents aged above 18 in 17 countries across five continents including China, the US, UK, France, Japan and Egypt. The poll collected responses to 17,496 questionnaires.

More than half of respondents from the 17 countries believed China's international image is improving, while 14.5 percent believed it remains the same.

Over one third of US respondents agreed that China's international image has been boosted in recent years, 14.5 percentage points higher than those who believed the opposite, which accounted for 21.1 percent.

China's international influence has also won wide recognition, with over 60 percent of respondents approving of its growth. 45.9 percent of those in the US who were surveyed hold this opinion. The proportion of those who agreed with this view is higher in non-Western countries, such as Egypt (79.2 percent) and Russia (76.8 percent) than in Western countries, such as Germany (44.6 percent) and France (49.2 percent).

When asked about which factors that contributed most to China's improving international image and influence, 59 percent of respondents believed it is China's rapid economic development that has boosted the global economy, while 54.4 percent say it is thanks to the country's technological applications that it is leading the world.

As for Chinese respondents, 75.8 percent believed China's contribution to the world economy is the most important reason. Others gave credit to the Belt and Road Initiative (BRI) (72.9 percent) and to leading technology (72.4 percent).

International image and influence are mirrored by a country's comprehensive national strength, and directly impact a country's cooperation with other international community members, Zhang Yiwu, a Peking University professor, explained to the Global Times on Sunday.

He noted that China is being welcomed by many emerging economies thanks to its new mode of development.

Companies involved in BRI projects perfectly combined China's interests with local interests, playing a positive role in pushing forward the local economy, unlike the traditional mode where local companies' interests were harmed when faced with an influx of foreign capital, Huang Renwei, vice president of the Shanghai Academy of Social Sciences, told the Global Times.

While experiencing fast development, China is expected by other countries to shoulder more international responsibilities, according to the poll. Participants from Western countries, for instance the US (25.7 percent of respondents), hope China will become more involved in tackling climate change. Meanwhile, Chinese respondents want their country to play the role of a global power to push forward dialogues between civilizations, and act as a stabilizing force in international finance.

Coupled with China's improving international image, the US image in the international arena and its influence has lost its sheen in recent years, reflecting a continuation of the world's dissatisfaction with the country, shows the poll.

The poll shows 55.5 percent of respondents from 17 countries believe that the US' international image is deteriorating.

The dissatisfaction has been mostly caused by US officials' controversial remarks and actions, and US hegemony as well as its interference in other countries' internal affairs through power politics. US diplomatic policies that impact other countries' interests and trade disputes provoked by the US have heightened this negative view.

Among the respondents, an overwhelming 95.9 percent of Chinese and 60 percent of American respondents believed the US passing a series of laws targeting China is an act of interference in China's domestic affairs. More than 80 percent of respondents in Ukraine and Kenya, 78.3 percent from Russia and 74 percent from Indonesia echo this view.