An exhibition at the Shanghai Book Fair showcased the history of Cihai, one of the most comprehensive dictionaries in China. 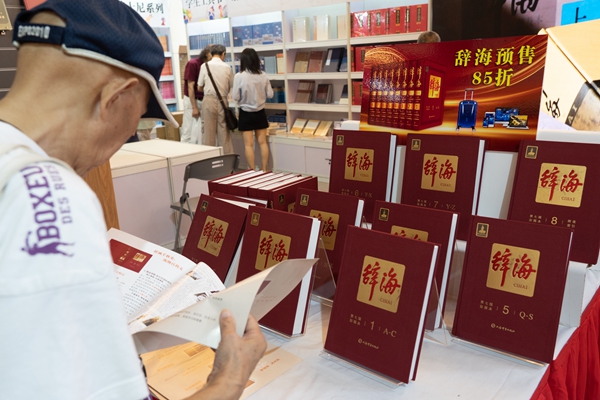 An exhibition at the Shanghai Book Fair showcases the history of Cihai, one of the most comprehensive dictionaries in China. (Photo: China Daily)

The exhibition which featured the achievements of dictionary compilation in China was presented by the Shanghai Lexicographical Publishing House. More than 20 authoritative dictionaries and encyclopedias were on display, from the Xinhua Dictionary aimed at the general public to the Encyclopedia of China.

The most important exhibit was Cihai, a large-scale encyclopedic dictionary in Chinese which was described by Li Yuming, director of the China Society of Lexicography, as "an important pillar of Chinese lexicography" and "one of the best comprehensive dictionaries in China".

In 1979, the three-volume edition of Cihai was published after several trial editions and revisions, marking a major milestone in modern Chinese lexicography and publication. The dictionary used to be so widely sought-after that people had to present their marriage certificates before they could buy a copy.

Lexicologists in China began to work on compiling Cihai as early as 1915. In 1928, Shu Xincheng took over as the chief editor, and under his leadership the first edition was produced in 1936, representing a milestone in China's history of publishing.

The original manuscripts of the first edition of Cihai from the 1920s were also on show at the exhibition, and according to Wang Wei, a librarian with the Shanghai Lexicographical Publishing House, this was the first time the manuscripts were displayed in public.

In 1957, Mao Zedong gave the instruction that Cihai should be revised and updated. He then assigned the task to lexicologists at the Zhonghua Book Company. The editorial commission of Cihai was founded in 1958 in Shanghai.

"Cihai is comprehensively revised every 10 years," says Lang Jingjing, a lexicographer with the Shanghai Lexicographical Publishing House. "Usually, as soon as a revised edition comes out, work begins on revising and updating the following edition."

A new illustrated edition of Cihai is expected to be released in October. Although the publishing house declined to reveal more information, it was previously reported by the Wenhui Daily that an online version will be released simultaneously with the print edition. According to the Shanghai-based newspaper, the latest edition of Cihai will have a computer edition, an app, and a WeChat edition. Each copy of the physical book will also come with a unique QR code that people can scan and register as a member.