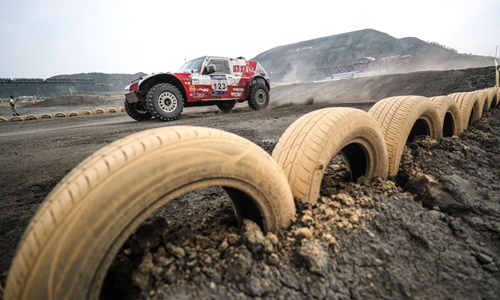 Fuxin, once known for its rich coal resources, is putting the pedal to the metal in developing its motor racing industry as the resource-depleted city seeks to build new economic pillars.

"It's simply amazing," said Gu Zhijian, a racer who came to Fuxin in northeast China's Liaoning Province for the grand final of the 2019 China Offroad Championship. He was deeply impressed by the racetrack built in an abandoned mine pit.

Around 150 km away from Liaoning's capital Shenyang, Fuxin converted an abandoned mine pit into a racecourse in late 2018. So far, the city has hosted eight races for off-road vehicles, attracting over 300,000 spectators in total.

This all feels like a dream to 73-year-old retired miner Shi Fucai. The last time the city boomed like this, he recalls, was about five to six decades ago. "The century-old mining town is coming back to life," he said.

Open-pit mining started in Fuxin more than 100 years ago. After the founding of the People's Republic of China, it became one of the country's main sources of coal for industrial use.

Back in the 1950s, the city's open-pit mines were so prosperous that China's top-notch coal experts and miners worked here around the clock, Shi said.

But the mining has also scarred the landscape, leaving mine pits up to 100 meters deep all over the city.

By 2001, the coal reserves at the mines had neared exhaustion. How to rejuvenate the struggling economy has long troubled the local government.

But Fuxin's efforts to turn things around stagnated for more than a decade.

"Back then, the government couldn't allocate enough funds to treat pollution and restore the environment of open-pit mines, so private companies were allowed to scavenge for the coal left in the mines to keep the local economy running," said Qin Fucheng, deputy head of the Xinqiu District government under Fuxin.

As China pushes through its supply-side structural reform and phases out backward capacities, Fuxin is also riding the wave of transformation with supportive policies.

Xinqiu District decided to shut down private mines and seek changes. In 2018, Beijing-based environmental technology company Zhongke Shenglian formulated a plan regarding the mine's renovation at the government's request. It was in that plan that the racetrack project was proposed for the first time.

Shortly afterward, the company built a 1.3 km-long racetrack in a small mine pit, and held an off-road race that attracted more than 100 competitors.

Xinqiu, as an emerging motorsport attraction, rose to fame overnight. "Racing in a mine pit tens of meters below ground level is a thrilling experience and is really tempting for offroad racers," said Jiang Changli, head of Fuxin city's automobile and motorcycle association.

With a planned area of 30 square kilometers, the racetrack project consists of a total of 12 professional tracks, each equipped with an auditorium of about 20,000 seats.

The local government also set up a management enterprise with Zhongke Shenglian to attract more investment. Over the past year, Xinqiu District has signed 132 deals in three project investment fairs.

The environmental restoration of coal pits is costly. By developing the motorsport industry, the city has lured in capital that can be used for the renovation of mines.

Li Jiangbo, president of Zhongke Shenglian, said the company used soil solidifiers and dust suppressants in the track building process, which can allow drivers to enjoy the fun without causing dust pollution.

Li's company is developing new products to improve soil quality around the mining pits and increase the green coverage of nearby areas.

There are other reasons to be cheerful for Wu Cuizhi, owner of a local restaurant, which has seen an increasing flow of diners since earlier this year.

Wu has set up a racing-themed canteen. "I once thought about leaving this resource-depleted city because I couldn't see a future for it. Now the motor racing has changed my mind," Wu said.