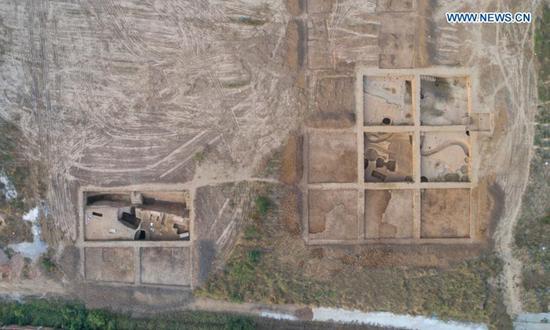 A small bird-shaped sculpture that was discovered in Central China's Henan Province has been rated by the American magazine Archaeology as one of the world’s top ten archaeological finds of 2020.

The sculpture was unearthed at the Lingjing “Xuchang Man” site in Henan. It is a tiny Paleolithic artwork that is 19.2mm in length and 12.5mm high. The bird statue was crafted from burned bone that can be dated back to 13,500 years ago. One side of it is dark brown and the other side is bronze color. The sculpture shows a stout, short-headed bird with a round beak and long tail.

According to Archaeology, the figurine is believed to be the earliest three-dimensional artistic object discovered in East Asia. Though it is miniature in size, the making of it is very exquisite. It has a smooth surface, but with carved lines that imply the bird’s feathers.

The unknown ancient artist who made this tiny figurine used different techniques such as grinding, cutting and scraping. It has not been carved with feet or wings, but with a pedestal created by the craftsperson to replace the bird’s legs to maintain the balance of the statue as well as to keep it upright.

The bird was first discovered in 2009, and then in June 2020 it was published as a research finding on the international platform of the science journal PLOS ONE. The figurine was introduced in Archaeology’s recent issue as the “Oldest Chinese Artwork.”

Archaeology is a popular bimonthly American magazine that has been published continuously for more than 70 years. It has a tradition of listing the year’s top ten most influential and exciting archaeological finds from all over the world. A total of six archaeological discoveries in China have been included since the tradition began. Along with the bird figurine from China, there are other projects such as a Viking DNA study from Northern Europe and Greenland and the discovery of the first English Playhouse in England that have been specified as the other great finds of 2020.