Looking at the white furry creature in the poster Shanghai-based Pearl Studio released for its new animated film Abominable on Wednesday, it's hard to link its cute visage to the terrible tales surrounding the legendary yeti of the Himalayas. 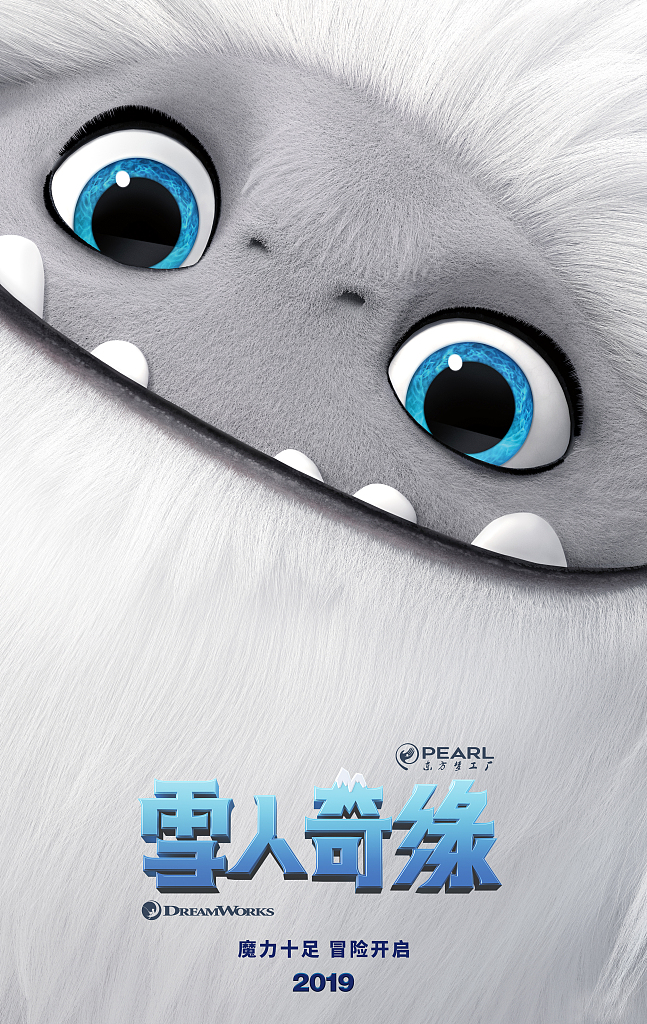 The China-US co-production between Pearl, formerly Oriental DreamWorks, and DreamWorks features a group of Chinese teens who help reunite a magical yeti with his family after a long 3,000-mile journey from the streets of Shanghai to the snowy mountains of the Himalayas. Directed by Jill Culton and starring the voice of Agents of S.H.I.E.L.D. actress Chloe Bennet, who has a strong fan base in China, is set to hit theaters around the world in September.

"It is a movie that tells a Chinese story for global audiences," Frank Zhu, CEO of Pearl Studio, told the Global Times in an email.

"A film for the whole family, it takes place in modern China and delivers a message about family and bravery that I believe will strike a chord with people of all ages. Additionally, a number of well-known scenic spots in China will be featured in animated form."

The charm of animation

In Zhu's opinion, animation has an advantage that live action films and other mediums lack. "The Chinese elements that people have grown used to can be transported to the space of imagination and be displayed in unexpected ways," he said.

Such a task is no easy job for any studio. According to Zhu, such a project requires talented individuals with cross-culture and cross-boundary backgrounds, such as Chinese-Americans who have been brought up in the Western creative system, know traditional Chinese culture and are able to use the most advanced means to promote Chinese stories to the world.

"Good storytelling plus the top technology from our partner DreamWorks - I believe this will allow global audiences to understand the beauty of China," he said, remarking that he is confident that the film will perform well at the global box office.

From apprentice to partner

Abominable marks the first original movie from the studio since Kungfu Panda 3 in 2016. Since then the studio has undergone some changes, going from a joint venture between DreamWorks Animation and China-based CMC Capital to a wholly owned subsidiary of a CMC-led consortium in February 2018.

"For Kungfu Panda 3, the relationship between DreamWorks and us was more like master and apprentice. We were at learning stage. However, this time our cooperation has been upgraded. We are now working with DreamWorks shoulder-to-shoulder on this important international project, which Universal Pictures has also joined as our distribution partner," he explained.

Kungfu Panda 3 had the benefit of being the third film in the franchise, as such it already had a solid foundation when it came to the characters and world-building.

"This is not the case for Abominable," Zhu noted.

"From the very beginning through to production, in every detail Pearl Studio and DreamWorks have worked closely together at each stage. We share a same goal, which is to produce a special world-class work."

Basing on its experiences collaborating with DreamWorks on Kungfu Panda 3, which is often seen as an excellent example of a China-US co-production, Pearl Studio developed its own Creative Hub, which has allowed the studio to work with top teams on various projects including Netflix's Over the Moon, the upcoming animated musical feature directed by animation guru Glen Keane and developed by a team led by Chou Peilin, Pearl's chief creative officer.

According to a report by Variety, Chou noted that the fact Pearl is a Chinese studio should not be a limiting factor. In the end, the studio's goal is to make films that can cross borders and be enjoyed around the world.

"It's animation. If we've gone through all the trouble of making it, we can dub it into any language. I don't think we should be limited to Chinese stories or just films with Chinese people, because I think that the audience here [in China] is definitely interested in things beyond just seeing themselves," she noted.

This is not the first time that the legendary yeti has appeared on screen. Over the years, a number of TV dramas, movies and even animated films about this mysterious creature have been produced around the world. One recent example was Warner Bros' 2018 animation Smallfoot, which also tells a story about a yeti coming into contact with humans.

When Abominable's release date was announced, some moviegoers around the world remarked that they were unexcited to see another similar film come out so soon.

Talking about this, Zhu pointed to 1975's Jaws and the more recent action film The Meg (2018) to show how similar films can generate quite different storylines.

"Additionally, the most fascinating part of animation is that different animators can have completely different understandings and ideas and so go on to produce very different stories," he said.

Although Pearl Studio has high ambitions to compete at the global box office, fierce competition from top studios such as Disney, Pixar, Illumination Entertainment as well as Japan's Ghibli is sure to make the road ahead a bumpy one full of ups and downs.