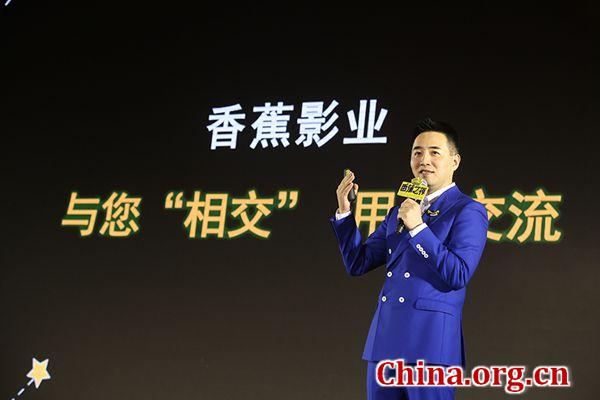 Banana Pictures, founded by the son of China's wealthiest man, officially unveiled its logo at the Shanghai International Film Festival on Monday.

Wang Sicong, son of Dalian Wanda Group Chairman and China's wealthiest man Wang Jianlin, launched a de facto film startup in 2015, with the company starting its daily operations last year. Now with the unveiling of its official label, the company has announced its existence within the Chinese film industry.

While Wang himself did not attend the gala to announce the milestone, his partner and the CEO of Banana Pictures Wei Xiangdong conveyed thoughts from the company's founder: "Although my boss has had many legends and labels, from what I can see, he is basically a big kid with vision, dreams and responsibilities. He said it is very easy to make quick money in the business, but what we really want to do is to take our time and energy to train new talent."

According to Wei, Banana Pictures aims to change the status quo of the film business. Rather than producing blockbusters, their first mission is to keep a low profile as they discover and train new directors and screenwriters.

Wei Xiangdong and fellow executives and filmmakers pose for photos at a gala to announce future plans of the emerging Banana Pictures label on June 18, 2018.

The company also created a support program, which kicked off last year, to support exceptional new directors. This year, they plan to start a similar competition and training program to award talented emerging script writers, with prizes set at as high as 6.3 million yuan ($1 million).

Aside from the programs to support new directors and writers, Wei added that Banana Pictures will develop original film projects targeted toward younger viewers.

The junior Wang is an entrepreneur, investor, film lover and e-sports fan, as well as an online celebrity on China's social networks.