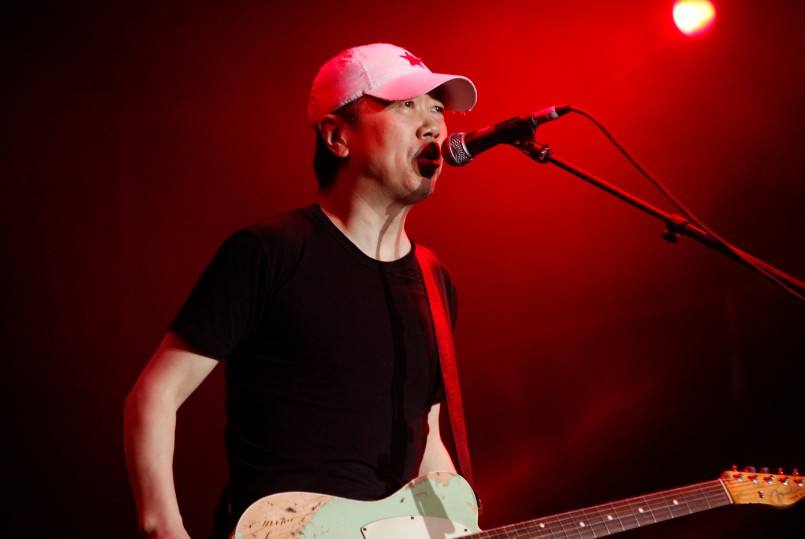 Cui Jian, Zheng Jun and Hong Kong singer Steve Wong Ka-keung, all in their 50s, gave a three-hour gig at the cultural center that can accommodate an audience of around 18,000.

The concert was warmed up with Zheng, 51, singing "Shooting Stars," an adaption of British rock band Coldplay's hit single, Yellow. Zheng gained national stardom for his folk ballads like "Cinderella" and "Return to Lhasa," both released in 1994.

Cui Jian, a 57-year-old Chinese rock icon, was the lead performer during the concert. A singer-songwriter, trumpeter and guitarist, Cui is often labelled "The Father of Chinese Rock," and his best-known works, "Nothing to My Name," "A Red cloth" and "Wild on the Snow," have been heart-throbbing songs affecting hundreds of millions of Chinese.

Most of the audience were mid-aged men or couples, who wildly sang along with the singers.

It was more like "a carnival or a get-together party" for Chinese rock music lovers, said Wang Jiang, a pop music critic in Shanghai, after watching the show.

"People welcomed the return of these rock stars with true love, although their performance was not as good as when they were in their prime," said Wang.

On social media posts, rock fans grabbing the concert tickets are called "Old Cannons," because the audience born in the 60s and 70s joked about for their forever young spirit.

"What does rock and roll mean to you?" A short video recording street interviews was displayed during the concert, showing taxi-drivers and restaurant staff answering the question.

The answers were very much alike --"Be young, forever young." "Be true to yourself." "No matter how hard life punches you, you fight back and never give up."

The concert reached a climax near the end when Cui Jian returned to the stage and sang his famous "Greenhouse Girl."

"You asked where I'm heading, and I pointed to the sea. I wanna be back, back to my old country road," the audience roared with the singer as the lyrics moved them to tears.

"In China, 1980s and 1990s were the golden age of rock. At that time, Chinese rock music, which was full of idealism and vitality, exploded like a music bomb among Chinese youth," said Wang.

But the influence of rock music has since withered, as the new millennium saw rapid economic growth in the country. People were too busy to pursue the so-called rock and roll spirit, he said.

"Going to a concert can be very nostalgic. Rock music has eternal classics. They remind us of the era full of faith," said audience member Naomi, who was born in the early 1970s.

"I'm glad I came tonight. The rock and roll spirit is still alive in China. Rock never dies," she said.