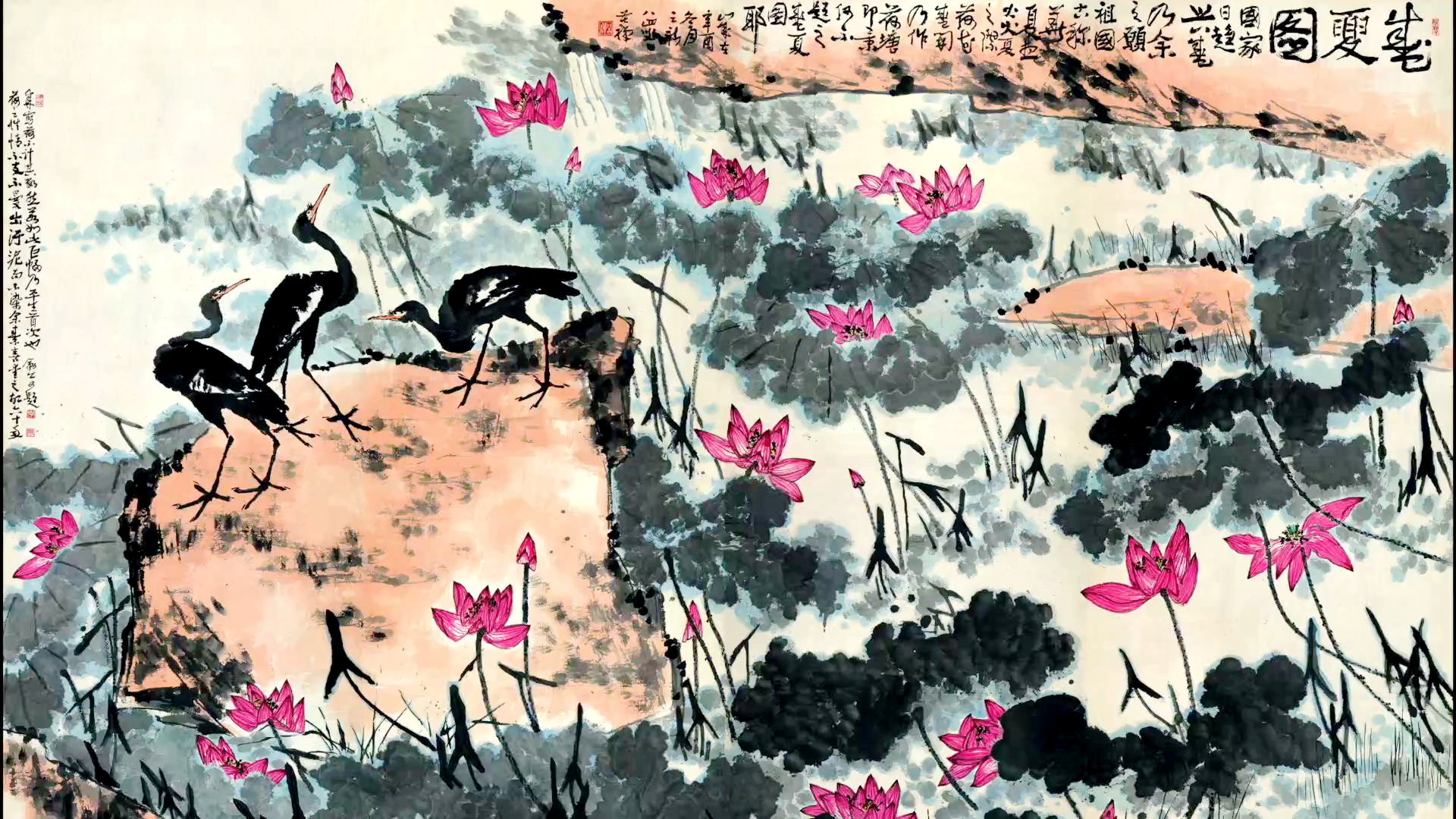 With lotus plants rising out of the murky water and reaching for the sky with their delicate blossoms, "Exuberance of Summer," a masterpiece produced by Chinese artist Li Kuchan (1899-1983) in his later years, still causes audiences to lose themselves in the sense of wonderment.

Born in 1899, Li Kuchan witnessed dramatic changes in Chinese society throughout his life. In the 1930s and 1940s, he focused on patriotic themes to inspire his fellow citizens in the face of foreign aggression. Decades later, in 1981, he created the famous freehand brushwork "Exuberance of Summer," a scroll-like work that stretches across nearly 22 square meters of canvas.

Instead of being presented as majestic, Li's lotus blossoms are distinguished by a simple and unadorned sense of strength, representing the essence of Chinese aesthetics. This artistic syntax is believed to derive from ancient stone and bronze inscriptions dating back several millennia.

The rounded fullness of the bronze inscriptions resulted from the casting of molten metals. Meanwhile, the stone inscriptions acquire their distinctive angularity from being carved by chisels. Blending these two techniques imbued Li Kuchan's style with a sense of endless scope.

Ancient calligraphy from the Han Dynasty (206 BC-220 AD) onwards was a source of inspiration for Li Kuchan. His understanding of the world and his life experience contributed to his unique way of creating wash imagery.

In 1923, Li became a disciple of Chinese painting master Qi Baishi (1864-1957). While studying under Qi, Li first encountered bronze and stone inscriptions, and the spirit of ancient calligraphy soon began to infuse his ink-wash imagery. In his bid to constantly improve as an artist, Li would copy rubbings of ancient stone inscriptions on a daily basis.

In the late 1930s, Li was incarcerated and tortured by Japanese military police. But his artistic spirit never wavered. With his strong and resilient personality, he remained optimistic that the marauders would eventually be dispelled and China would prosper once more. Quite a few of his later paintings expressed this sense of elation, especially the "Exuberance of Summer."

At the beginning of the 1980s, Li Kuchan got to experience a much more prosperous era, and he decided to create a special work to commemorate this period. First, he planned the sweeping image in his mind. He painted huge lotus leaves with broad strokes before tracing their robust stems with a masterful decisiveness, their plants and blossoms shooting out of the murky water and reaching for the sky. Like a chisel delicately chipping away at a rocky surface, his brush seemed to impact the paper gently while leaving impressions to be revered and idolized for generations.

"Exuberance of Summer" is a spectacle brimming with the quiet strength and commanding fortitude of Li's temperament, which was analogous to the bronze and stone inscriptions he admired and learned from. This classic painting also serves as a manifestation of China's unique aesthetics and the country's promise and stature.