‘The Panda’ confident of title defense against her challenger Angela Lee 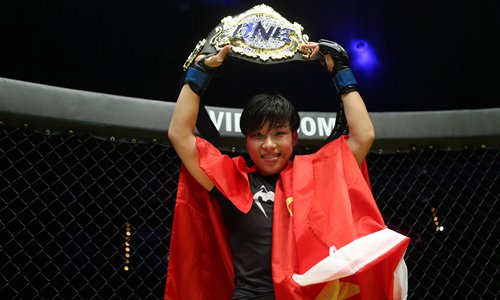 "I don't like doing predictions, but what I expect most is to finish her with a KO win," Xiong, One Championship's strawweight world champion, told Chinese journalists in a recent interview. "I hope this time she won't quit."

A match between Xiong and Lee, One's atomweight world champion, was originally scheduled for November, but Lee withdrew days before the bout, citing a disk injury.

The duo will meet again March 31, as the One Championship stages its first-ever event in Japan.

Nicknamed "The Panda," Xiong, 31, has been training for the last two months at the Bali MMA club in Indonesia.

"I don't have a specific training focus as I prefer to keep myself an all-rounder," said Xiong, who has a 16-1 record.

Undefeated Lee (9-0) has long envisioned victory over Xiong as she moves up weight in a quest to become the first-ever two-division female mixed martial arts world ­champion.

"Lee is a competent fighter. I'm looking forward to a fight with her," Xiong said. "Last time I was fully prepared, but she withdrew."

Under One's weight ­categories, the strawweight division generally refers to competitors between 52.3 and 56.7 kilograms and sits between the lighter atomweight and heavier flyweight divisions.

"I haven't had time to showcase my ground skills as I so often won fights through KOs," Xiong said, adding she does not want to see Lee quit again.

"People are talking about how good her ground skills are, but I think it's time for them to see my techniques."

The resort island Bali is known as a paradise for scuba diving and surfing, but it seems Xiong does not have much leisure time.

The hard-working fighter skipped the chance of a family reunion during the Chinese ­Lunar New Year holidays.

"You have to sacrifice something to outperform others," Xiong said. "But I'll consider spending more time with my family in the future."

Other top bouts at the Tokyo event include lightweight world champion Eduard Folayang of the Philippines in a rematch with Japanese martial arts icon Shinya Aoki.

Two-division world champion Aung La N Sang will try to defend his middleweight strap against Japanese contender Ken Hasegawa in an epic rematch of their 2018 bout.